Starting with the Wombat's In The Mailbox: 05.13.19, who first brought me the news via Twitchy: AG Barr Appoints US Attorney To Dig Into Russia Probe Origins and Just One Minute's analysis AG Barr Taps A Not-Quite-Special Counsel To Investigate Trump Investigation.

If I am reading this correctly, Durham is not a special counsel like Mueller:


Yet Mr. Durham’s role — essentially giving him a special assignment but no special powers — also appeared aimed at sidestepping the rare appointment of another special counsel like Robert S. Mueller III, a role that allows greater day-to-day independence.


Rep. Mark Meadows (R-NC) reacted to the news by writing on Twitter: "John Durham is an outstanding choice for special prosecutor investigating 2016 pre-election activities—his selection further demonstrates Bill Barr’s tenacity and determined desire to get to the truth and restore credibility at the top tier of the DOJ and FBI." 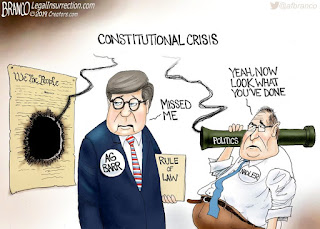 For a taste of how the appointment will be receive in liberal circles: AP Seizes the Day, Barr launches new look at origins of Russia probe


Trump and his supporters have seized on both to accuse the Justice Department and the FBI of unlawfully spying on his campaign.


In the weeks since the release of the report, Trump and his allies have launched a new rallying cry: “Investigate the investigators.”

Trump’s campaign is publicly calling for criminal investigations into former FBI officials and is making “spygate” fundraising pitches, seeking to turn the tables and transform the Russia investigation into a political asset instead of a liability.

Trump and other Republicans have argued that the FBI “spied” on Trump’s campaign by surveilling former Trump campaign adviser Carter Page under a warrant from the Foreign Intelligence Surveillance Court. Page’s communications were surveilled in late 2016 and early 2017, after he left the Trump campaign. Barr has said government “spying” occurred on the Trump campaign, though he has insisted he did not intend the word to carry a pejorative meaning.

Critics contend that the allegations are an effort by Trump to divert public attention away from his own actions. 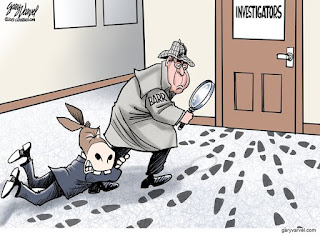 and the NYT (via MSNBC), Barr Assigns U.S. Attorney in Connecticut to Review Origins of Russia Inquiry


Attorney General William P. Barr has assigned the top federal prosecutor in Connecticut to examine the origins of the Russia investigation, according to two people familiar with the matter, a move that President Trump has long called for but that could anger law enforcement officials who insist that scrutiny of the Trump campaign was lawful.

From the Canada Freepers, Getting Too Close?  "As the DOJ gets closer, expect the Democrats and the mainstream media to get even more vile." As a Facebook friend commented "Will he get to choose how he will be suicided?"


Older and busted argument: There was no spying.
Old and busted argument: There was spying but it was legal.
New and future busted: The investigators of the spying won't find the wrongdoing.
Predicted future busted: The illegal spying did not originate from Obama's White House.
Finally, the last to bust: Prosecuting Obama White House officials is purely political and goes against America's traditions.


Baker said he is “assuming that they will dig and find stuff” and that “we’ll try to sort it out and see what mistakes were made.” But Baker defended the FBI's actions, including its use of the Foreign Intelligence Surveillance Act.

Funny how that works, isn't it. Sundance at CTH, Ratcliffe: James Comey “under investigation for violations of the espionage act”?…


If this were anyone except Judiciary Committee member John Ratcliffe, it would be easier to ignore…. but it’s not.  John Ratcliffe is a very tempered and deliberate voice; he has a strong reputation in DC and doesn’t speak in riddles, hype, or disingenuous terms.


First, I don't know how Joe DiGenova would know this. Yeah, he has contacts in DC. But in the IG office?

Second, this doesn't sound like something this particular IG (and maybe any IG) would find. Remember the IG report on McCabe et al.? It took pains to give McCabe, Strzok, Page and the every reasonable benefit of the doubt, and some benefit of unreasonable doubts, too.

I cannot imagine this IG would state his conclusions so baldly. At best, we could hope he finds the later FISA warrants "not in accordance with routine practice" or something fairly milquetoast like that.

That's my sense, that DOJ/FBI guys are very reluctant to conclude that other DOJ/FBI guys have done anything wrong, far more reluctant than they were to convict and harass Trump supporters. Byron York, WaEx, Why was FBI so wrong in Trump-Russia wiretap warrant? They weren't wrong; they were conspiring to obtain a warrant without adequate evidence, believing that once Hillary was elected their shenanigans would never be revealed. NYPo's editors wonder, Who were Mueller’s ‘contractors’?


“Special counsel Robert Mueller spent more than $732,000 on outside contractors,” writes Paul Sperry at RealClearInvestigations, “but his office refuses to say who they were.” That stonewalling has led some on Capitol Hill to wonder if Mueller’s contractors included the shady British spook Christopher Steele, author of the discredited “dossier” on President Trump. The special counsel dispatched staff to London, Sperry notes, and his final report “recycles the general allegations leveled in the dossier.” Speculative as this so far is, if Mueller did draw on Steele information, it should raise serious concerns, given that such reliance would have “occurred long after FBI Director James Comey described the dossier as ‘salacious and unverified.’ ”

And on to impeachment fever. From the WaFreeBee,  The Real Democratic Agenda "It's impeaching Donald Trump". Robert Reich at the Guardian, There are many reasons not to impeach Trump. The House should do it anyway. Da Beast, Trump Says He Can’t Be Prosecuted. Congress Can Change That. They could at least pending Supreme Court revue, but they won't. Stephan Collinson at CNN, Many Democrats fear Trump is laying an impeachment trap. Trump thrives on conflict. But, Can Nancy Pelosi Keep the Democrats in Line? (NYT). Roger L Simon, PJ Meda, Democrats Need Rehab from Trump Investigation Addiction. Ace, The Washington Post: Trump Has Launched an "All-Out War" Against... the Democrat Congress Which Has Launched Over 20 Investigations In Order to Derail His Presidency " "Clown world."


“You just show up and plead the Fifth and it’s over with,” Sen. Lindsey O. Graham (R-S.C.) told reporters Monday, adding that Trump Jr.’s lawyer would “have to be an idiot” to let him testify again.

“This whole thing is nuts,” Graham continued. “To me, it’s over.”


“It can only lead to mischief ... This is not a friendly maneuver. This is an adversarial maneuver to bring him in under oath. And the Democrats will try to trip him up and get him to make some kind of mistake," Paul said.

Paul said he expects Democratic senators to use Burr's subpoena to "go after the Trump family" and "trick" President Trump's eldest son into saying something that contradicts his previous statements. Then, lawmakers could go after prosecuting Trump Jr.