In his resignation letter, Rosenstein talked up accomplishments outside of the Mueller investigation.

"We staffed the Justice Department and the U.S. attorney's offices with skilled and principled leaders devoted to the values that make America great," he wrote. "By consulting stakeholders, implementing constructive policies, reducing bureaucracy, and using results-driven management, we maximized the public benefit of our $28 billion budget. Productivity rose, and crime fell."


Deputy Attorney General Rod J. Rosenstein — whose tumultuous two years as the No. 2 Justice Department official were marked by battles over the special-counsel probe of President Trump — submitted a resignation letter Monday indicating he will leave the job in two weeks.

Rosenstein’s departure had been expected since the beginning of the year, but the date was repeatedly pushed back as special counsel Robert S. Mueller III wound down his investigation and compiled a report detailing his findings.

Since his first days on the job, Rosenstein’s role in the Trump administration was controversial, from the firing of FBI Director James B. Comey in May 2017 to the conclusion by Rosenstein and Attorney General William P. Barr that there was not sufficient evidence for an obstruction-of-justice case against the president.

In his resignation letter to Trump, Rosenstein praised the president for his personal charm and policy goals. “As I submit my resignation effective on May 11, I am grateful to you for the opportunity to serve; for the courtesy and humor you often display in our personal conversations; and for the goals you set in your inaugural address: patriotism, unity, safety, education, and prosperity, because ‘a nation exists to serve its citizens,’ ” Rosenstein wrote.

He ended his letter with a sentence that asserted the Justice Department’s independence, before closing with a phrase from Trump’s campaign: “We keep the faith, we follow the rules, and we always put America first.”

Stories at Ace, PJ Media and Da Caller, too. I'll miss having Rod to kick around.  I still confess I haven't decided whether Rosenstein wears a white hat or a black hat. I suppose he might just be the ultimate institution guy, whose goals were the preservation of a honest DOJ. That would be a good thing.

Via the Wombat's In The Mailbox: 04.29.19 Sebastian Gorka at American Greatness: brings Obamagate – No Misdemeanors, Only High Crimes


Since then, the 45th President has been cleared twice by Congress, by a House and a Senate investigation, and now most recently by the $35 million Mueller report. There never was any collusion, as he has told me almost two years ago, and he can’t be charged for obstructing justice most obviously because, without an original predicated crime, there is nothing he logically could have obstructed from being uncovered.

But the reason we cannot simply “move on” is not because there are not better things for the president to worry about but because now we know that there is something about which all Americans should be gravely concerned.

It would be impossible to detail in this one article all of the things the Obama Administration did to subvert the Trump campaign through the use of the intelligence community (IC) for political ends. Moreover, we are only just beginning to chronicle of the depth and breadth of the corruption involved. . . . 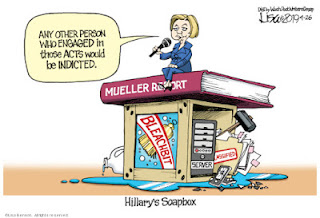 A bit of a concession from The Nation?  The Mueller Report Indicts the Trump-Russia Conspiracy Theory - The real Russiagate scandal is the damage it has done to our democratic system and media with a cameo by the Mysterious Mr. Mifsud. Note the Mueller report admits the Mysterious Mr Mifsud is not connected to Russian intelligence, but does not admit that Mifsud a Western asset used to set up Papadopuolos.


The most glaring absence of a Kremlin intermediary comes in the case that ostensibly prompted the entire Trump-Russia investigation. During an April 2016 meeting in Rome, a London-based professor named Joseph Mifsud reportedly informed Trump campaign aide George Papadopoulos that “the Russians” had obtained “thousands of emails” containing “dirt” on Hillary Clinton. That information made its way to the FBI, which used it as a pretext to open the “Crossfire Hurricane” probe on July 31, 2016. Papadopoulos was later indicted for lying to FBI agents about the timing of his contacts with Mifsud. The case stoked speculation that Papadopoulos acted as an intermediary between Trump and Russia.

But Papadopoulos played no such role. And while the Mueller report says that Papadopoulos “understood Mifsud to have substantial connections to high-level Russian government officials,” it never asserts that Mifsud actually had those connections. Since Mifsud’s suspected Russian connections were the purported predicate for the FBI’s initial Trump-Russia investigation, that is a conspicuous non-call. Another is the revelation from Mueller that Mifsud made false statements to FBI investigators when they interviewed him in February 2017—but yet, unlike Papadopoulos, Mifsud was not indicted. Thus, even the interaction that sparked the Russia-collusion probe did not reveal collusion.

A pair from Sundance at CTH regarding Sally Yates Trump Baits “Coup” and “Overthrow” – Sally Yates Surfaces…. and Sally Yates -vs- Michael Flynn… and another, Listen Carefully – Senator Lindsey Graham Outlines Deep State Exit… but at WaEx, Barr has to answer for Mueller report summary, Lindsey Graham says. Why?

Now that the Mueller report has been released and the “muh Russia” hoax has been exposed as the complete farce that it always was, it’s time to call it what it always was: a classic dezinformatsiya operation.

Anti-Trumper, Benjamin Wittes, Five Things I Learned From the Mueller Report. Of course, he claims to have found something really bad.


FWIW, I got my copy of The Mueller Report: The Final Report of the Special Counsel into Donald Trump, Russia, and Collusion in the mail today. Now I just need to read it.
Posted by Fritz at 5:01 PM