Pennsylvania Votes to Save the Snot Otter 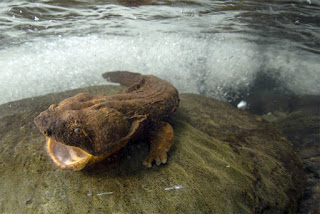 In short, it's not exactly a looker.

But the Eastern hellbender salamander was the overwhelming choice of lawmakers for amphibian representation in the state. On Tuesday, the state's House of Representatives voted 191-6 on a bill that would name the aquatic creature its state amphibian. The Senate passed the bill in February.

The hellbender is a nocturnal salamander that can grow more than 2 feet long. The mud-colored creature, covered in a layer of mucus, breathes primarily through loose flaps of thick, wrinkled skin that look a little bit like lasagna noodles. 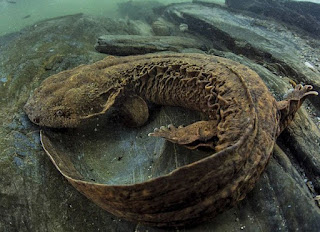 The salamander is listed as "near threatened" with a decreasing population by the International Union for Conservation of Nature, though that assessment hasn't been updated since 2004. The U.S. Fish and Wildlife Service notes that dams and illegal pet trade may also contribute to the species' decline.

Garth Everett, a Republican state representative who helped push the bill through Pennsylvania's House, said hellbenders have been on the decline.

"Not many people have actually seen hellbenders," Everett said after the vote, The Associated Press reports. "They live only in very clean streams, and they live under rocks."

A worthy choice, if you must have a state amphibian. I'd never heard of them being called snot otters before, though.
Posted by Fritz at 6:50 PM