AP reports Trump renews Mueller attacks as Russia report release looms, but then, they prefer it when Republican presidents are on the defensive. Althouse: "AG Barr to release redacted Mueller report within week." Mediaite, AG William Barr Reveals Four Areas of Redaction in Mueller Report, and boy the Democrats whiny about it.

The third are information in the report that could interfere with ongoing prosecutions. You’ll recall that the special counsel did spin off a number of cases that are still being pursued. And we want to make sure that none of the information in the report would impinge upon either the ability of the prosecutors to prosecute the cases, or the fairness to the defendants.

And finally, we intend to redact information that implicated the privacy or reputational interest of peripheral players where there is a decision not to charge them. 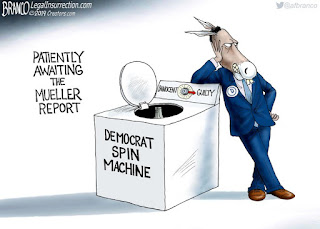 But Democrats can get the unredacted report; all they have to do is impeach Trump:

According to Blitzer, the House is far more likely to get an unredacted copy of the Mueller report if Democrats file articles of impeachment against President Donald Trump.

Politico, The Forgotten Reason Congress Needs to See the Mueller Report I'll bet it leaks anyway. Two people can keep a secret, if one of them is dead. Weissman ain't dead. 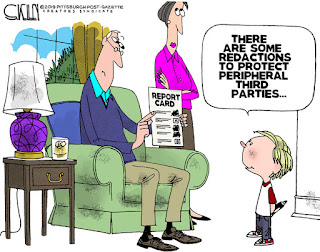 Of course, Bill Barr testified to the House yesterday, and it was a blast. Ace, Most Important Take-Aways from AG Barr's Testimony This Morning


1, he will release the report after redactions have been made in about a week.

2, he refused Democrats' whining that they should get a special, illegal unredacted version of the report that they could selectively leak to their many, many media allies and in-kind donors. When Democrats insisted that the law provided some wiggle-room to release secret grand jury testimony to Congress, he scoffed and asked, "Where?" As in, "point me to where the law says this, hacks."

3, when Democrats whined that he had only provided a "summary" of a 400 page report, he said he did not in fact release a summary of a report, but a digest of its legal conclusions. And the conclusions were: No collusion, and no case made for obstruction.

4, he dismissed the Democrats' whining about the full report by noting that Mueller Had One Job, which was a "binary job" to either bring charges or to not bring charges, and he had not brought charges against the president or anyone else for collusion or obstruction. This is a not-too-subtle dig at the idea of "talking indictment," where a prosecutor does not bring charges and yet uses his position to suggest various crimes that maybe coulda been charged to besmirch a man who is, not just by judicial tradition but by the prosecutor's own determination, innocent of any crime. He's crapping on the Democrats' idea that even though the topline conclusion is "no collusion and no chargeable obstruction" that they can sift through the report for whispers and hints of possible crimes Too Awful To Contemplate.

5, when Democrats whined that there's no way that a human could read 300-400 pages of a report (much of which was merely transcripts of testimony which can be skimmed) in a few days, he rebutted that he already knew the general contours of the report because he had been given a preliminary briefing on the findings of no collusion, no obstruction on March 5th.  . . .

He says the IG report on FISA abuse will also soon conclude, as soon as May or June. I saw a report, whose URL I can't find, claiming that he also suggested that he himself would be doing his own investigation, or at least review, of this case.

When Democrats whined that they just didn't believe Barr's statement of conclusions and wanted to hear from Mueller, Barr responded that Mueller was offered the chance to review Barr's letter digesting the conclusions, but passed on the chance. 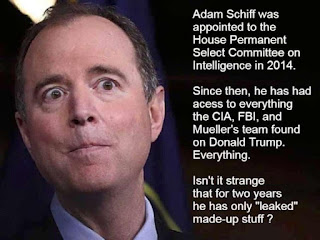 Legal Insurrection, AG Barr Says Mueller Declined To Review Summary, Redacted Version Will Come Out In A Week. The Peacock, Barr 'reviewing the conduct' of FBI's 2016 probe of Trump team Russia contacts. The Daily Mail, Bill Barr says he IS reviewing FBI conduct that kicked off Mueller probe as Democrats vow court battle to get un-redacted version of report he says will be out in a week. Roger I. Simon, PJ Media, William Barr Is the Democrats' Worst Nightmare. John Sexton at Hot Air, AG Barr Will Review FBI’s Actions In 2016 Trump Probe


I’m well aware of what Democrats think of this investigation but it’s hard to keep calling it a distraction when the Mueller report is complete and the investigation into collusion is over. At least it should be over, but Democrats are doing their best to stretch out the narrative for as long as possible.

Via the Wombat's In The Mailbox: 04.09.19, Julie Kelly at AmGreat, Same People Behind Iraq War Lies Pushed Russian Collusion. Our "Elites" suck. Also Ken Masugi, Mueller’s Report Is a Rerun from the Nixon Era. I always thought of it as revenge for White Water.

This turned out to be one of the most prescient and important (and creepy) statements of the Trump presidency: from Chuck Schumer to Rachel Maddow - in early January, 2017, before Trump was even inaugurated: pic.twitter.com/TUaYkksILG
— Glenn Greenwald (@ggreenwald) April 8, 2019


There’s also really good news in here. Think about it. Now we know the entire anti-Trump operation is memorialized in writing. There is documentary evidence of the entire operation within these memos. We did not know that before this moment.

Therefore, it looks like President Trump can add the Comey Memos to the pre-existing declassification list. At any time, President Trump now has a set of documents he knows to exist that his office can ask to be released. The investigation is over.

If the FBI was running an honest and genuine investigation; what do they have to fear from the release of the Comey Memos now that the investigation is over.

Former FBI general counsel and Comey confidant James Baker testified to Congress in late 2018 that his predecessor, Mueller deputy Andrew Weissmann, was widely disliked at the FBI and destroyed morale in the general counsel’s office. A long Twitter thread, but read it all. Rosenstein deeply implicated, but Dr. John at Flopping Aces thinks Rod Rosenstein may have appointed Mueller to save Trump from Obama’s FBI and DOJ. That does appear to be how it worked out.

Althouse reviews VDH in The history of the effort to take down President Trump. "Entertainingly told by Victor Davis Hanson." (which I cited yesterday).


It's entertaining because it didn't work and because there are so many steps in this long-term effort, some of which I had forgotten. Like, do you remember Dr. Bandy X. Lee?

I was not a Trump supporter at the time of the election. (I wasn't a Hillary supporter either.) But the effort to take his victory away is something I have always opposed very strongly. America voted, and that was that as I see it. So I greatly enjoyed VDH's retelling of the grand story of Trump's survival.

VDH has 11 paragraphs that begin with the phrase "When that did not work...". And that's why it's funny, and not a horror story.

It's still a horror story.

Nice Deb at PJ Media, Ukrainian Officials Having Trouble Getting the DOJ's Attention on Ukrainian-Democrat 2016 Collusion Efforts. Apparently it's still OK for any other country but Russia to try to influence US elections.
Posted by Fritz at 10:23 AM