I had hoped it would calm down a bit after Mueller let Trump off the hook, but nooooo! 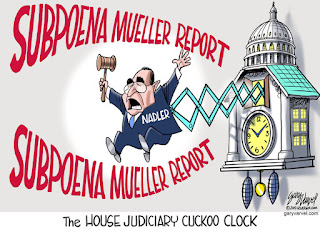 Quote of the Day from Victor Davis Hanson at AmGreatness, All the Progressive Plotters:


Is it now permissible in 2020 for Trump’s FBI director to insert an informant into the campaign of the Democratic presidential nominee? If Joe Biden is the 2020 nominee, will the Trump Justice Department seek FISA warrants to monitor the communications of Biden’s campaign team—in worries that Biden son’s business practices in the Ukraine had earlier compromised Biden who had intervened on his behalf by threatening to cut off aid to Ukraine? Will they investigate Biden’s propensity to hug and kiss under-aged girls? Will Trump’s CIA director contact foreign nationals to aid in spying on Biden’s aides? Will National Security Advisor John Bolton request that the names of surveilled Biden campaign officials become unmasked as a way of having them leaked to the media? Will Trump hire a British ex-spy to gather together rumors and gossip about Biden’s previous overseas trips and foreign contacts, especially in the Ukraine, and then see them seeded among the Trump CIA, FBI, Justice Department, and State Department? Is that the sort of country we have now?

Sundance at CTH is still on it:  The Predicate: “Russia Interfered in the 2016 Election”?…


Take the ‘Russia Attempted to Interfere’ predicate away and what becomes visible behind the lifting-fog is an extensive multi-agency operation, encompassing multiple intelligence institutions and all three branches of government, to conduct political operations under the guise of counterintelligence. Yes, that’s what was factually taking place.

The Russian Interference narrative is the larger cover story.

It’s time to stop accepting it.

I believe the Russians interfered in our election. I also believe they interfered with every election starting with the cold war (and perhaps further back). It is not an acceptable excuse for what they did. I would also direct your attention to this comment at Althouse. Tom Fitton of Judicial watch calls Spygate “The Worst Corruption Scandal in American History”. I don't know if corruption is quite the right word. Except for the Clintons, most of these people weren't in it for the money, but to protect their power. Mark Tapscott at the Epoch Times: Hillary Contractor Described ‘Cover-up Operation Work Ticket’ in Newly Uncovered Email


Judicial Watch obtained the notes as part of more than 400 previously unreleased FBI documents a federal district court ordered turned over to the non-profit as a result of its Freedom of Information Act suit.

In the Dec. 11, 2014, email, an unidentified Platte River Network official told another that “I’m kind of freaking about Gresham. Thoughts on what to do with [name redacted].”

The official responded that “Its all part of the Hillary coverup operation. I’ll have to tell you about it at the party.” A smiling emoji was inserted by the responder between the two sentences.
. . .
Pagliano is also found in the newly released documents telling a senior Clinton aide on multiple occasions that he is having to deal with a host of problems with the email system, including “virus investigation and cleanup;” “clean up virus from bb [BlackBerry] profile;” and multiple “brute force attacks” against Hillary Clinton’s server, requiring him to “reset password.”

Critics have long claimed that Clinton’s private email system was vulnerable to being compromised by foreign governments, especially those of Russia and China, which operate extremely large and sophisticated digital hacking operations that target the U.S. government agencies and officials, prominent individuals in the political campaign world, and big corporations.

Judicial Watch President Tom Fitton told The Epoch Times late April 8 he wonders “how many smoking guns is it going to take” before a credible and comprehensive investigation is completed.

Why Did The Administrative State Target Donald Trump?…

Levin: ‘What the Democrats are hoping is you don’t understand any of this’ 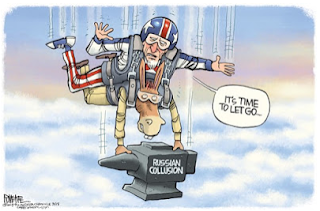 Clarice Feldman, AmThinker: Mueller Express Fails to Deliver, Democrats Head for the Abyss. Adam Mill at AmGreatness: Democrats Will Regret Not Walking Away When They Could.

Sundance at CTH: Chairman Jerry Nadler: We Seek Evidence of “Betrayals to the Public Interest”… and they'll define the "public interest", thank you very much. 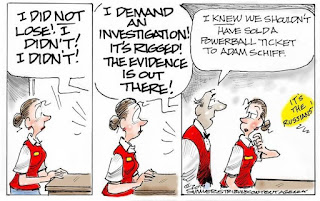 Apparently, Michael Cohen's use by date has passed: AP, Michael Cohen’s usefulness to prosecutors may be at an end and CNN, Adam Schiff throws cold water on Cohen's bid for help delaying prison term. Too bad, he'd be such a good witness!


Biden was not just soft on the Soviets; he actively worked in lock step with their military and foreign policy objectives.

Biden was also a strong opponent of U.S. military opposition to Soviet expansionism.

In 2008, Pete Wehner wrote in the Wall Street Journal:

“Throughout his career, Mr. Biden has consistently opposed modernization of our strategic nuclear forces. He was a fierce opponent of Reagan’s Strategic Defense Initiative. Mr. Biden voted against funding SDI, saying … ‘The president’s continued adherence to [SDI] constitutes one of the most reckless and irresponsible acts in the history of modern statecraft.’ Mr. Biden has remained a consistent critic of missile defense and even opposed the U.S. dropping out of the Antiballistic Missile Treaty after the collapse of the Soviet Union (which was the co-signatory to the ABM Treaty) and the end of the Cold War.”

But he should, just to be a dick: Trump Attorney: 'The President Has Not Asked for Nancy Pelosi's Tax Returns'