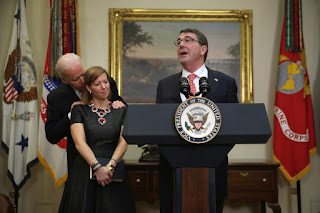 And Ann Althouse is just the liberal to call him out on it: Biden's announcement video is anchored in a demonstrable lie (her italics).


I finally got out my headphones out so I could listen, but I could not get through to the end, because I became so angry at the LIE and the continued music and montage became torture to me.

In the part that I did see, we were shown images from the Charlottesville march — replete with the "Jews will not replace us chant" and swastikas — and then Biden's blandly earnest face asserted that Trump said some of them "are fine people." But Trump did not say that! It's absolutely established that Trump excluded those people explicitly before saying that there were some fine people on both sides of the question of keeping Confederate statues. (At the time of the fine people remark, Trump said, "I’m not talking about the neo-Nazis and white nationalists because they should be condemned totally.") 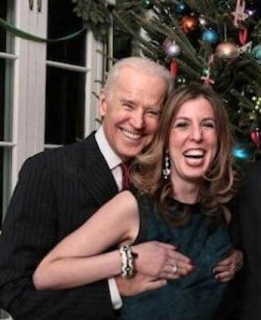 How dare Biden rest his campaign on a blatant lie — a lie that has been used to stir up fear and racial discord?! The hypocrisy of offering to bring us together and embrace lofty values when he is either repulsively ignorant or just plain lying!

I could not finish watching that video. I tried, but I couldn't force myself. It's utterly toxic bilge.

If Biden does not come forward and retract this video and apologize and commit himself to making amends, I consider him disqualified. He does not have the character or brain power to be President.

Stacy McCain (no liberal) also calls him out on the lie: Are You Ready for … JOE-MANIA? 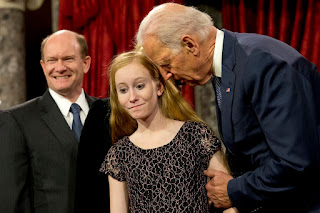 Try to control your excitement, America. Yes, he’s already run unsuccessfully for President twice — if you’re under 30, you weren’t even born the first time he lost — but this time Joe Biden is ready to win it all, baby. His platform for 2020? ORANGE MAN BAD!


Former Vice President Joe Biden announced his 2020 campaign in a video on Thursday, warning about the rise of white nationalism under President Donald Trump.
The candidate featured lengthy footage of the Unite the Right rally in Charlottesville, calling it a “defining moment” in the country’s history.
“It was there on August of 2017 we saw Klansman, and white supremacists and neo-Nazis come out in the open, their crazed faces illuminated by torches, veins bulging, and baring the fangs of racism,” Biden said.
He praised the “courageous Americans” who clashed with the group of protestors creating violence in the city.
“That’s when we heard the president of the United States that stunned the world and shocked the conscience of this nation,” Biden said, repeating the hoax that the president called neo-Nazis “very fine people.”
He scolded the president for equivocating between “those spreading hate and those with the courage to stand against it.”
“At that moment, I knew that the threat to this nation was unlike any I had ever seen in my lifetime,” Biden said, announcing his run for president. 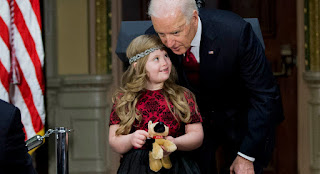 The problem with this narrative is, it’s not true. The people “spreading hate” in Charlottesville were a comparative handful of extremists, whose takeover of what had been intended as a peaceful demonstration produced a wild mob scene in which a young fanatic drove his car into the crowd. President Trump did not say that the neo-Nazi nutjobs were “very fine people,” but this distortion has been repeated so often on MSNBC, CNN, etc., that it has entered the world of liberal mythology, like the belief that Ronald Reagan was to blame for the AIDS epidemic in the 1980s. Nevertheless, here is 76-year-old Biden — who was elected and re-elected in the 1970s on a platform of opposition to school integration — pretending to be the conscience of the nation vis-a-vis racism.

But it's a lie popular with liberals so it won't hurt him that much.
Posted by Fritz at 7:23 PM