We're back after all the travel, and maybe, just maybe, the resumption of a steady stream of Russiagate follderall. Where to start? Frank Miele at RCP: What If Everything You Know Is Fake?

Last week, we were told by Attorney General William Barr that Special Counsel Robert Mueller’s investigation against Trump had found no collusion with Russia. This should have come as no surprise to anyone who had the ability to filter out the blathering background noise of the heads that are paid to talk incessantly. Certainly, even for the most gullible of news consumers, the revelation in October 2017 that Hillary Clinton had paid for the so-called Steele Dossier of Russian-supplied dirt should have steered the story from “What did Donald Trump do?” to “What did Hillary Clinton do?” For many of us, it was the final nail in the coffin of the Russia hoax, but not for the major media, not for the Democrats in Congress, not for Mueller himself.

The insistence on sticking with a false narrative when the evidence overwhelmingly points the other way is a symptom of delusion, which is what Trump has dubbed the Russia collusion hoax. That describes an overwhelming percentage of the media who ought, by dint of their profession’s alleged standards, to have known better.

But the situation for consumers of news is different. In their case, you have to consider that sticking with the facts in the face of overwhelming insistence on a false narrative by the media and your peers takes extraordinary courage. Confronted with a cognitive dissonance between what you perceive to be true and what everyone else tells you to be true, it is psychologically predictable that most people will choose to reduce their stress by going along with the crowd. That has been the case for the majority of Americans over the last two years as they have been continually assured by “respected” voices that Trump is guilty. 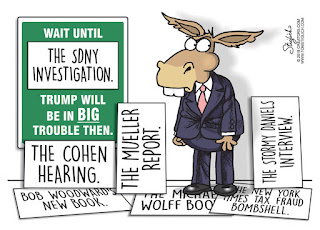 Thomas Lifson at American Thinker: George Papadopoulos warns the Dems to be careful what they wish for

The democrats have absolutely no idea what they are wishing for in terms of releasing the full Mueller report. It will detail all the western intelligence operatives and US allies (UK, Australia, Italy) involvement in trying to set up Trump and his guys. Nothing Russia!
— George Papadopoulos (@GeorgePapa19) April 2, 2019


I doubt it. Andrew Weissman is more careful than that. But that part of the story does need some careful study. I hope Barr is planning an October surprise for Congressional Democrats. WaEx: Judicial Watch rightly puts the screws to Justice and the FBI over the amount of force used in the Roger Stone "arrest."


And as I noted immediately after Stone’s arrest, over-amped raids such as this one are more likely to cause unintended violence and injury than to prevent it, sometimes quite literally with deadly consequences.

Judicial Watch, well known as a vigorous watchdog, filed three separate Freedom of Information Act requests with the Department of Justice and the FBI in the days after Stone’s arrest. According to the organization’s press release, neither the department nor the FBI has responded to the FOIA filings.

By law, FOIA requests must either be honored or acknowledged with an explanation for why the requested information is exempt from disclosure. Because the nation’s chief law enforcement agencies seem to be ignoring the law, Judicial Watch has filed suit to compel compliance.

Judicial Watch wants specific information both on why CNN was on hand to air the raid live, a question that looks to have been adequately answered, but still is worth double-checking, and on internal planning records and communications among various key actors at the FBI and at the Justice Department.

It is the latter set of records that is probably most important. SWAT-team-like raids of the sort used against Stone are usually reserved for targets considered dangerous, likely to suddenly destroy evidence, or a risk for sudden flight. None of those considerations would appear, to the layman’s eye, to apply to Roger Stone.

If they did not apply, then the commando tactics certainly seem to run afoul of rules in the FBI Investigations and Operations Guide that says arresting agents should “employ the least intrusive means” that will accomplish the mission. The public deserves to know why the FBI considered the Stone raid to be “the least intrusive” possible.

“That we’re being stonewalled suggests that someone has something to hide,” said Judicial Watch President Tom Fitton. “Judicial Watch is investigating the investigators, and it’s time for them to come clean.”

PJ Media, Nunes to Make Eight Criminal Referrals to Justice Department This Week. Why not a nice round ten, or even a dozen, possibly a baker's? Let's hope Barr's DOJ is more receptive to them than Session's.

Bob Kerry, (yes, that Bob Kerry), How did Department of Justice get the Trump-Russia investigation so wrong?


3. When is it appropriate for the FBI to begin an investigation? Once started, these things are hard to stop. A single campaign official suggesting the possibility of collusion with a foreign power or a document written as opposition research or a demand from a member of Congress are very thin reeds upon which to challenge the legitimacy of an elected official.

At The Lid,  Ukraine Prosecutor Has Evidence Of Collusion W/Dems-US Envoy Stops Him From Giving To Barr

What is hard to understand is there have been reports of senior Ukraine officials trying to help Hillary win the election for two years, why hasn’t the U.S. Ambassador granted the prosecutor a visa.