A little slack this rainy Saturday morning. Maybe I can take the time to do this right. 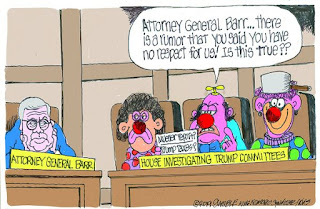 
While it is important that the top law enforcement in the United States publicly acknowledged that the Obama administration and its intelligence agencies surveilled its domestic political opponents during the heat of a presidential election, it is what he said next that was most startling: that the CIA and other federal agencies in addition to the FBI may have been involved. “I’m not talking about the FBI necessarily, but intelligence agencies more broadly,” he said.

It's going to take a lot of digging to get all the rot out. Dan Sobieski at Flopping Aces predicts Barr Will Find Spying On Trump Directed By Obama. I'm pretty sure that's true, as indicated by Susan Rice's final memo, but I don't think we'll ever see the bottom of that well. 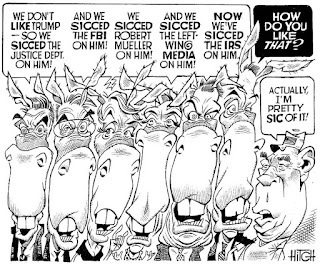 AllahPundit at Hot Air, Comey On Barr’s Comments: I’ve Never Thought Of Court-Ordered Surveillance By The FBI As “Spying”. Words are shifty things. Courts do not order the spying. Courts give the OK for "surveillance" after they have been requested to do so by law enforcement and intelligence agencies, after looking at the the evidence provided by the agencies. Courts have to evaluate that evidence, but are pretty much have to trust the agencies that they are collecting the evidence in an unpolitical way, and for a legitimate purpose. Currently, there is a lot of doubt that is true, and an investigation of that is warranted. If I were a judge on the FISA court, knowing what I know, I'd be very dubious now of any warrants submitted by that crowd.


“So, in other words,” said the Democratic counsel, “by definition, if you presented information and a FISA court approved it, that would constitute credible sufficient information?”

Sit back and savor that exchange for a moment. One of the most senior officials in the Federal Bureau of Investigation – an organization that regularly refers for prosecution people who don’t tell the full truth – champions this peculiar standard of credibility: If you can snooker a FISA court judge, the information used to traduce the court is rendered by definition “credible sufficient information.” What is the condition of the FBI if its leaders think whatever you can get past a judge is good enough?

And how do we know that the G-Men used an unverified document to obtain the FISA warrants? Because FBI Was Still Assessing Christopher Steele’s ‘Reliability’ Even After Using Dossier To Obtain Spy Warrant (Chuck Ross, Da Caller). In fact, as far as we've been able to determine, Moby Dick as more factual basis than the Steele Dossier.

Via  the Wombat's In The Mailbox: 04.12.19, Power Line contends we've Gone Through the Looking Glass:


It is almost unbelievable that the Democrats and their media adjunct are trying to deny that the Obama administration spied on the Trump presidential campaign. Are they unaware of the multiple FISA warrants obtained to spy on Carter Page? Do they not know that the fake Fusion “dossier” was the basis for those FISA warrants, thus eliminating any question about whether the point was to spy on the Trump campaign? Are they unaware of many news reports of federal agencies recruiting multiple human intelligence assets to report on the Trump campaign? And if they are aware of those generally-acknowledged facts, what on God’s green Earth are they talking about? 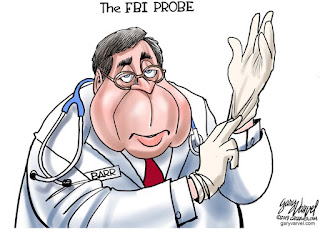 
And how is it that Rosenstein — he who signed the third FISA renewal on Carter Page — was able to supervise the Special Counsel without a disqualifying conflict? I hope they’ll get around to addressing that question some time soon as well.

Rosenstein is an odd figure in all this. Is he a white hat, as some contend, protecting the President, a black hat out to get him, or a gray hat, an institutional man dedicated to protecting the institutions, and by extension himself, from what appears to be an awful lot of misconduct? Adding credibility to the third possibility, Rod Rosenstein Defends Attorney General’s Handling Of Mueller Report (Chuck Ross, Da Caller).


“He’s being as forthcoming as he can, and so this notion that he’s trying to mislead people, I think is just completely bizarre,” Rosenstein said in a rare interview with The Wall Street Journal.

Da Caller, Democrats Can’t Explain What Happened To Carter Page: The FBI requested and got four FISA warrants alleging that Carter Page was a Russian spy, allowing them to monitor his communications backwards and forwards in times, and all his contacts up to two hops away. He's still a free man, and unindicted. But Democrats insist there was no "spying."


He said the prosecutor who interviewed him -- Aaron Zelinsky -- was keenly interested in hearing more about the Russian who had offered him dirt on Clinton because Caputo had at first forgotten to mention it during his House and Senate interviews. Now, in retrospect, he thinks they were going to try to ensnare him in a "1001" process crime.

Section 1001 of Title 18 of the United States Code "prohibits knowingly and willfully making false or fraudulent statements, or concealing information" to a federal officer.

Caputo told PJ Media that when he volunteered what he remembered about the Russian national, Zelinsky's face dropped because the prosecutor's attempt to nail him on a process crime had just gone up in smoke.

"He didn't have a good poker face," Caputo said.

On Fox News Business Wednesday, he told Trish Regan: “When they asked me about him, I told them what I knew. By their faces, I knew that it was someone that had been sent to me. It was after my interrogation with the Mueller team that I went out, hired private investigators and found out the guy had used a fake name, Henry Greenberg, and that he had been working with the FBI for 17 years.”


There were three principle plotlines advanced to reverse the election. The first was the Hillary Clinton campaign’s brazen effort to sway the Electoral College. The campaign pushed initially for an “intelligence briefing” of the electors that we can reasonably suspect would have included the now-disproven dossier. Clinton’s allies also engaged in a comprehensive campaign to harass electors by inundating with them thousands of emails, phone calls, and videos. Death threats were reported. This plot failed when an anonymous bureaucrat balked at declassifying the dossier’s contents in December 2016. Even so, two electors representing hundreds of thousands of votes did indeed succumb to the pressure.

The second plotline was the 25th Amendment plot between Deputy Attorney General Rod Rosenstein and Andrew McCabe. That effort went as far as identifying two members of the cabinet as potential co-conspirators and making plans secretly to record audio of the president meant to recruit the remaining cabinet members to present a motion for Congress to remove the president for mental incompetency. That plot appears to have been abandoned when the deputy attorney general appointed a special counsel a few days later.

Special Counsel Robert Mueller constituted the third plotline. Mueller’s team appears quickly to have recognized that the Russia collusion case was a hoax and instead embarked on a strategy to harass the president and pressure witnesses using harsh tactics and threats. It was obvious even to a presiding federal judge that Mueller had more interest in getting a witness to “compose” than to “sing.”

At the same time, Mueller’s team made some very provocative moves that appeared intended to tempt Trump into interfering with or firing the special counsel. In particular, Mueller’s assistant and Rod Rosenstein reportedly engineered the outrageous raid on the office of Trump’s private attorney, Michael Cohen.

The Mueller plot to remove Trump eventually failed because Trump resisted the temptation to fire the special counsel, which would have elicited comparisons to Richard Nixon and the “Saturday Night Massacre,” leading perhaps to charges of obstruction of justice. And, in spite of overwhelming heavy-handed tactics, the special counsel failed to score any significant witness “flips” that could overcome the absence of actual evidence. After a few months, the Mueller probe had to contend with an unraveling narrative that was the very pretext for the investigation.

But Matthew Boose, also at AmGreat concludes In the End, the Plotters Won:


The great irony is that this hoax undermined democracy. Somehow, corporate talking heads and intelligence bureaucrats were able to destroy the faith of millions of Americans in our elections. Through it all, the public was lied to, poisoned with misinformation, and driven apart. Neighbors were turned against one another by lies. A bitter political divide grew deeper and more bitter.

It affected foreign policy, too. Vladimir Putin acquired titanic, outsized influence on the international stage. His fingerprints were suddenly to be found everywhere! Very serious, important Washington “experts”—many of them the same frauds who pushed the Iraq War—assured the public that America must craft its foreign policy around the suspicion that Putin is a James Bond movie villain with secret tapes of prostitutes peeing on the president. Armed with this blackmail, Putin was, we were told, secretly pulling the strings in our government.

With the media and official Washington in control, millions responded with choreographed outrage when Trump failed to “stand up to Putin” in Helsinki, or when Trump said he would withdraw from foreign wars in regions where Putin has influence. The Democratic Party became full-blown Russia hawks, pushing for conflict with a foreign power based on a lie, just like the neocons who came before them.

This hoax has seeped into the American mind. It has left the country a more mistrustful, more angry, more broken place than it was. It was all ridiculous from the start, and yet its pushers managed to impact the United States on a profound level. The damage done is proof of their unaccountable power.

While the media has totally blown up their credibility, hopes of a great backlash causing them to lose influence seem misplaced. It was never about facts. The media’s job was always to stage a political attack. Those who wanted it to succeed won’t stop now. Don’t be surprised when the Dump Trump army begins to parrot the next round of MSNBC talking points.


House on Wednesday, President Donald J. Trump commented on the Mueller report finding of "no collusion" between Russia and the 2016 campaign and said that "crooked" people in the FBI and the Clinton campaign concocted the collusion as "an attempted coup," an "attempted takedown of a president."  Trump added that "they got caught" and "what they did was treason."

"What they did was disgraceful," said the president. "There’s never been anything like it in the history of our country.”

Also via the Wombat's In The Mailbox: 04.12.19, Adam Schiff Facing Expulsion From Intel Committee & Loss Of Security Clearance If Matt Gaetz Gets His Resolution Passed. But of course it won't pass. The idea is just to ridicule Schiff, which is a good a use of Congress as most.

The resolution, titled “Preventing Extreme Negligence with Classified Information Licenses Resolution“—or “Pencil Act”—calls for Schiff’s resignation from the committee. The acronym is a reference to “pencil neck,” which is President Donald Trump’s recent nickname for Schiff.