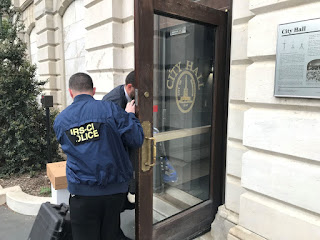 
Investigators searched Baltimore City Hall and Mayor Catherine E. Pugh’s homes among other sites Thursday in a highly visible indication of a federal criminal case over lucrative children’s book deals Pugh cut with businesses connected to the government she has run since 2016.

It's not just "businesses," in fact, a large number of the "books were sold" (in fact, it's not clear than anything other than money changed hands) to University of Maryland's Medical System, an agent of the State. So we have the appearance of a state agency bribing a city mayor; for what?


The law enforcement action spurred a new round of condemnation of Pugh from Maryland’s political establishment and calls from Republican Gov. Larry Hogan and many Democrats for the embattled mayor to resign.

Pugh (D) took an indefinite leave of absence beginning April 1 attributed to health issues following criticism of the more than $700,000 she was paid for her self-published Healthy Holly book series.

Investigators from the FBI and IRS fanned out to at least a half-dozen locations Thursday, including a nonprofit tied to Pugh and the apartment of a former top Pugh aide. They also retrieved records from the office of Pugh’s attorney.

The University of Maryland Medical System confirmed receipt of a grand jury subpoena from Maryland’s U.S. attorney seeking documents and other information “to conduct their investigation of Mayor Pugh,” according to a spokesman for the medical system that paid for Pugh’s books while she was a board member.

The early morning arrival of federal agents from the FBI’s Baltimore field office and the IRS’s criminal investigative division from Washington was the first public signal of federal law enforcement interest. As agents were still working, Hogan for the first time called on Pugh to step down, saying she “has lost the public trust. She is clearly not fit to lead.” 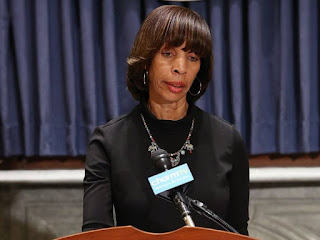 For a while it was being reported that Mayor Pugh had left the state, but that rumor was later refuted.


Baltimore Mayor Catherine Pugh (D) is in poor health and is not "lucid" enough to make a decision on whether to resign amid a scandal over her business dealings, her attorneys said Thursday.

Pugh's attorney Steve Silverman made the comment following FBI raids on her homes and offices.

“She is leaning toward making the best decision in the best interest in the citizens of Baltimore City,” Silverman said, according to The Baltimore Sun.

He told reporters Thursday that the mayor was saddened by the raids of seven locations linked to her administration, including two houses she owns in the city, the home of a former aide, her city hall office and others according to multiple news reports. Pugh's office has said the mayor is recovering from a bout of pneumonia.

Silverman said he spoke to Pugh on Thursday and that she is "physically still ill, and she is obviously emotionally and extremely distraught."

"I feel terrible for her as a human being," he added, according to WBALTV.