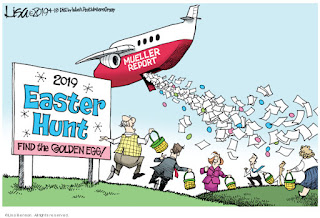 It can't come anywhere near being comprehensive; there's just too much. And thinking of it, it's kind of ridiculous, we really had all the answers from Barr's summary. Boom! The Collusion Conspiracy Theory Has Been Obliterated By The Mueller Report  No collusion with the Russians. None, nil, zip, nada, zero. The prosecutors, most of whom are Democrats and hate Trump, tried really hard to make a case for obstruction, but failed to find all the necessary requirements under the law, to the point that every time Trump said something bad about the Mueller team, they they tried to pin another case of  obstruction on him, and in reaction he said something bad again.  “If They Had An Obstruction Case, They Would Have Made It”.  A veritable self licking ice cream of reaction and attempted criminalization. You can find the entire report here Read the text of the Mueller report. I'm going to wait for my copy from Amazon. 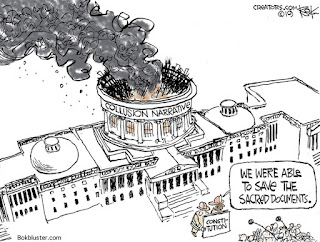 
Washington, D.C., is going insane in anticipation of today’s release of the Mueller report, but honestly, I find it difficult to care. More than a year ago, I came to the conclusion that Robert Mueller’s “investigation” was actually a cover-up, intended to conceal or distract attention from the real scandal, i.e., that the Obama administration had authorized intelligence agencies to spy on Donald Trump’s campaign. We cannot expect Mueller to actually admit this in his report, of course, and so whatever’s in this 400-page document, it won’t be an admission of the truth — that Mueller was appointed after Trump fired FBI director James Comey because people in the intelligence community were afraid Trump would discover and reveal the extent of illegal and/or corrupt activity by the Justice Department, the CIA, etc. Meanwhile . . .  BATTLE OVER EDITS!   WASH POST: Mueller decided he could NOT come to conclusion on obstruction, was difficult to determine President’s intent… MORE

‘The look on their faces’! Watch Mary Katharine Ham torch media for ‘gaslighting’ with their evolving ‘collusion’ narrative

.@mkhammer on Democrat "collusion" claims: "I hope nobody missed leg day because carrying these goal posts are going to be very heavy... There was no collusion." pic.twitter.com/HWMQMKhq05
— Steve Guest (@SteveGuest) April 18, 2019

Also that you were completely wrong with the conspiracy theory you pushed, in which you routinely accused Trump of treasonous collusion with Russia to steal the election. https://t.co/6h2Z2HoHke
— Mollie (@MZHemingway) April 18, 2019

If you’re upset that the President is NOT the villain you wanted him to be, you’re missing the point.

Our President did not collude nor obstruct. That’s a good thing.
— Dan Crenshaw (@DanCrenshawTX) April 18, 2019


EBL, Media and Democrats Act Predictably To Release of Mueller Report, Ed Morrissey, Hot Air, Fox’s Chris Wallace: My, But Barr Sounded Like Trump’s Personal Attorney This Morning. RATIO PARTY: WaPo correspondent says Mueller report proves most reporting was on the mark. Brit Hume fact checks Max Boot. Ace, Media is, Get This, Embarrassing Itself over Conspiracy Theories and Media Running Around Giving Itself Participation Trophies, For Some Reason and Babylon Bee Goofs on CNN Cutlists, soon to be fact checked by Snopes,


More seriously, Ace links to the Andrew McCarthy piece, Robert Mueller Violated Prosecutorial Standards By Smearing Trump Without the Evidence For an Actual Criminal Charge , so I'll steal his excerpt:

This is unbecoming behavior for a prosecutor and an outrageous shifting of the burden of proof: The constitutional right of every American to force the government to prove a crime has been committed, rather than to have to prove his or her own innocence.

Anything else was -- and is -- a smear. Worse than that, it flouts the Constitution. 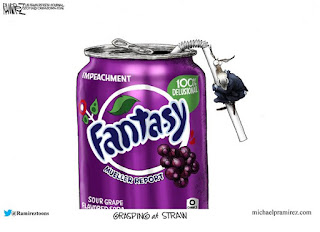 Rudy Giuliani has the #MuellerReport Quote o' the Day


Via The Last Refuge, we just stumbled upon this keeper from one of the President's lawyers. As an aside, a quick rip through legacy media sites demonstrates their utter cluelessness of -- or maybe complicity with -- Spygate. It turns out that MSNBC and CNN are still, at this very moment, greedily gaslighting their poor, deluded viewers. More on that later.


The special counsel has Used a standard of proof that's unheard of. He can't be 'conclusively sure' that the president didn't commit obstruction. Well, that means the President has to prove his innocence. That kind of upends 2,000 years of jurisprudence...
...The overarching principle of obstruction law is it's very, very hard to make an obstruction case when there is no proof there's an underlying crime.

"Sh**'s gonna get real for these fools very, very soon. 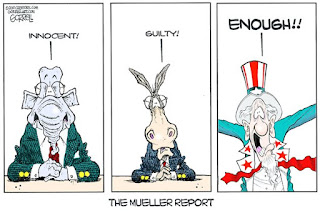 Insty: Bill Barr, the Adult in the Room:


So no collusion, and no obstruction, and no serious grounds for complaining about the redactions. No doubt some politicians, eager to keep their base heated up, will try to pretend otherwise, and some cable news channels and media outlets, desperate for viewers and clicks, will go along.

But normal people should be pleased and relieved that there was no collusion, even as they should be angry that a huge chunk of our political class seriously maintained that the President of the United States was a Russian puppet. That claim, based more on a desire to undo the 2016 election than on any actual evidence, was a poisonous corruption of our political discourse, and those involved should be — but won’t be — ashamed.

They should, however, be ignored in the future.

Ken Starr expresses concern that Mueller report may not be written in a fair and balanced way. (video) Ya think? Roger Kimball at Spectator USA The Barr is raised - Many will be furious at the Mueller report’s findings. That’s a big problem for America.

Never-Trumper Patterico, The Mueller Report: Preliminary Reaction to the Reporting


Basic takeaway: if Trump managed not to obstruct justice, it certainly wasn’t for lack of trying. He tried and tried, but could not get his underlings to monkey with the system as he wanted them to. 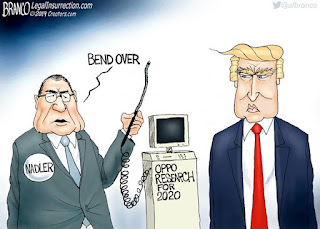 As a prosecutor, he hates people who hate prosecutors. Ed Morrissey reports Swalwell thinks Barr Has To Resign After Mueller Report And Today’s Presser, Not gonna happen. WaEx, Adam Schiff: Mueller report condemns, it doesn't vindicate, but we knew you were going to say that, but Steny Hoyer (my congressman) Impeachment not worthwhile' after seeing Mueller report.

Getting out the Talking Points, Mueller Made 14 Referrals Of Potential Crimes To Outside Offices, mostly (redacted).


"A considerable body of evidence, much of it fragmentary, indicates that many CIA people have left-leaning political preferences, but less evidence shows that political bias influences CIA analyses," Gentry concludes.

"But in 2016 observers of U.S. intelligence began to wonder if the CIA's once-firm prohibition on partisan politics had changed, and to ponder whether a new kind of politicization had arisen: namely, institutionally embedded, partisan bias," Gentry wrote.

"The attacks on Trump were unprecedented for intelligence officers in their substance, tone, and volume," he stated. "Critics went far beyond trying to correct Trump's misstatements about U.S. intelligence; they attacked him as a human being."

McClatchy,  Mueller finds Kushner was a top target of Russian influence, but he mostly steered clear


While Mueller concluded there were “reasonable arguments” for prosecutorial action, he ultimately opted against it, finding the available evidence would not meet a criminal burden of proof that Trump’s aides were “willfully” violating the law or seeking valuable information from a foreign power.

Texts and emails verified Kushner’s account of the meeting to investigators. As the meeting transpired, he described it as a “waste of time” in a text to Manafort and asked his aides to call with an excuse to leave early.

Kushner did build a relationship during the campaign with one individual connected to the Russian government: Dimitri Simes, the head of a think tank in Washington known for its Russia policy program. Simes discouraged Kushner from publicly associating with Russians, citing concerns about “optics,” and provided Kushner with a memo on potential Russia policy that he passed along to other campaign aides.

So about that "Rule" about not smearing someone who has not been indicted?

Even Politico notes the irony of a guy who used to pass documents to the DOJ every few weeks now claiming that Sacred Honor forbids him from cooperating with the DOJ.


Steele declined the inspector general’s request on the grounds that it would be improper for him to take part "in an internal Justice Department investigation as a foreign national and former British intelligence agent," Politico reported Wednesday.
The explanation is somewhat ironic given that Steele, a former MI6 officer, provided his anti-Trump research to the FBI as well as to Bruce Ohr, a Justice Department official.

Meanwhile, word is that IG Horowitz is in fact investigating Steele -- and whether he really was a Super-Spy, after all.

Rico at Theo's: What Difference Does It Make?: Spygate vs. Watergate

- In the infamous words of the Red Queen of Corruption, HMF Hillary Clinton aka Felonia von Pantsuit: "What difference does it make?"

Nixon's "Watergate" was nothing compared to Obama's "Spygate" except that:

- Nixon was a Republican, so the Democrats hogpiled on him and made a mountain out of a molehill. [Call it revenge for Nixon winning the Presidency over a Democrat Loser by winning 49 states.]
- Obama is a Democrat, so the Democrats circle-the-wagons for 'one of their own' and are attempting to make a mountain into a mole hill. [Call it revenge for Trump having the audacity of winning and replacing two of their premier Losers...Obama & Hillary].

Democrats, simultaneously defining both Losers and Sore Losers for decades.