Well that was fun. Last night around 3 AM the phone rang. Never good, AMI right? It was the local sheriffs auto-dialing to tell us that we were under a tornado warning (you know, when they think they know one is on the ground nearby) and that we should take cover. So we grabbed our electronics and headed to the basement where we waited 45 minutes (or two evil Sudokus), until the radar indicated the worst was past. This morning, no damage appears to have occurred nearby, thank goodness. 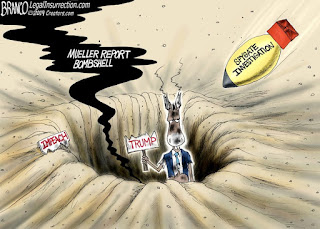 Anyway, on to Russiagate. Byron York, WaEx lists Five arguments the Mueller report won't settle. Yeah, collusion is on there because Democrats won't accept that an exhaustive investigation didn't come up with something they can use to impeach him. Behind the paywall at WSJ, Washington Waits in Suspense for Mueller Report. Politico undercuts them with Trump White House braces for full Mueller report

Several of President Donald Trump’s aides conceded that the nearly 400-page report, which Attorney General William Barr has said he’s aiming to release this coming week, will likely include new details about Trump’s behavior that are at a minimum embarrassing.

But they believe they have a powerful shield against renewed Democratic outrage and media scrutiny in the form of the principal conclusions Barr highlighted in a four-page letter three weeks ago—namely that Trump’s 2016 campaign did not collude with the Russian government, nor is there sufficient evidence to prove that Trump obstructed justice.

“This is a report where everybody already knows the outcome,” said David Bossie, Trump’s 2016 deputy campaign manager. Trump, he added, “wants it out. He just wants it out and over with.”

“In 400 pages there’s bound to be something the media will spin as embarrassing for the president and then that will be the story,” a White House official said. “But will it be collusion? Will it be obstruction? Will it be conspiracy? Will it be criminality? No, no, no and no.”

Never-Trumper Patterico is Anticipating the Mueller Report and goes well beyond the known facts.


I don’t think the report will put it quite this way, but here’s what I think some of the more salient facts are, that will likely be borne out by the report.

The Russians had a campaign to disrupt the 2016 elections and to help Donald Trump win the election. The Trump campaign was aware of parts of this campaign, for example through Roger Stone. The campaign was approached by Russian operatives and in at least one case took them up on a meeting, with relatives of the President and his Krelim-connected campaign chairman meeting with someone representing the Kremlin. Afterwards, Donald Trump helped draft a statement lying about the nature of the meeting. Kremlin officials greenlighted a possible Trump-related real estate project in Moscow. The president’s lawyer later lied about the extent of these contacts to Congress, almost certainly with Trump’s knowledge and after consulting with lawyers connected to Trump. Meanwhile, the Trump campaign did a major favor for Russia by tipping them off that Trump was willing to go softer on sanctions that are very damaging to the corrupt and kleptocratic Putin regime.

However, no prosecutable case can found of the Trump campaign conspiring with Russia on any of these fronts. There is no indication that they helped to hack any computers. The lightening up on sanctions is a policy that Trump likely favored regardless of whether he got help from the Russian government, given that Trump is a huge personal fan of the murderous autocrat Putin, as evidenced by his sycophantic statements at Helsinki and elsewhere. As repellent as those statements are, and as counterproductive to human rights as the lifting of sanctions might be, all of this is more the product of Trump’s admiration for murderers and strongmen than the product of blackmail or (as the Steele dossier alleged) a quid pro quo for the help Russia gave Trump in electing him.

As often happens, allegations that would sink another person will roll off Trump’s back because what would be inexplicable for a normal human being can be explained as the result of the President being highly erratic and morally compromised in general, as well as being a giant asshole.

I doubt Mueller has made any express “referral” of any of this to Congress, but there will likely be some subtle reference to the notion that the fact that no prosecutions were brought should not preclude Congress from evaluating the material in its oversight capacity. It’s hard for me to imagine the absence of any statement like that, given that Mueller so pointedly refused to exonerate Trump on obstruction. Why make a point of that lack of exoneration if the matter is not to be taken up by Congress in some way? 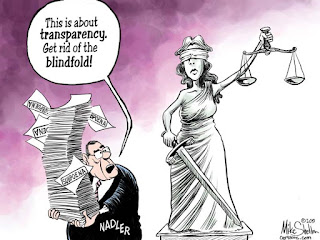 And Jerry Nadler says Congress Will Judge for Itself on Whether President Trump Obstructed Justice in their usual non-partisan way /sarc. Reuters whines about How Mueller's hunt for a Russia-Trump conspiracy came up short. He couldn't find the goods.

Andy McCarthy, always a good read at NR, Why Isn’t Assange Charged with ‘Collusion with Russia’?


To sum up: If the Justice Department had indicted Assange for collusion, Mueller’s Russian-hacking indictment would no longer stand unchallenged. Assange would deny that Russia is behind the hacking, and prosecutors would have to try to prove it, using hard, admissible courtroom proof — not top-secret sources who cannot be called as witnesses without blowing their cover, or other information that might be reliable enough to support an intelligence finding but would be inadmissible under courtroom due-process standards. If the prosecutors were unable to establish Russia’s guilt to a jury’s satisfaction, it would be a tremendous propaganda victory for the Kremlin, even if — as I believe — Russia is actually guilty.

From Da Caller, Blowback From Spying On Trump Campaign Will Eclipse Russiagate, Geraldo Rivera Says. Even blowhards are right once in a while.

Joe Di Genova at the Epoch Times, Bill Barr Just Let Us Know the Hunters Are About to Become the Hunted featuring photos of Peter Strzok, Andrew McCabe and Lisa Page. According to Don Surber, "Justice Is Coming". Clearly an optimist. I'll settle for revenge. 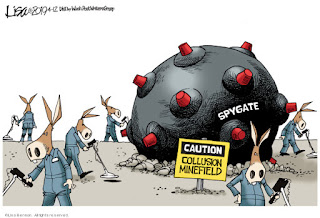 From Sundance at CTH, Jay Sekulow: “Three” FISA Applications Were Denied in 2016 and What This Means… It means even the FISA court knew something hinky was going on by the end. Read it all.


I’ll bet you a donut Presiding FISC Judge Rosemary Collyer; knowing all of the sketchy DOJ and FBI actions that had taken place in the past eighteen months; and seeing the FBI text messages about her FISA court surface; told Judge Rudy Contreras he could not participate in a legal case were he approved a dubious FISA warrant that was now being used as evidence against the accused, Flynn.   That’s why Contreras “was recused”.

If my suspicion is correct, and I’m more than 90%+ sure on this, the transcribed intercept of Michael Flynn’s communication with Ambassador Kislyak, which was leaked to media, was based on an extended FISA warrant (renewal) where General Michael Flynn was the ongoing surveillance target.

He also informs us that Mark Meadows says IG Horowitz Has Interviewed Kortan, Pientka and Three Others – Also Trump Has Never Read any Documents Related to Declassification… Let him explain to you why this matters.

Former @realDonaldTrump Campaign Aide Carter Page claims he received multiple death threats "based on the incitement of violence paid for by the DNC, and pushed by @TheDemocrats , including congressman Schiff." pic.twitter.com/O935Mlcm2n
— Washington Examiner (@dcexaminer) April 13, 2019


And for your amusement, Via Theo's Then the Tables Turned.
Posted by Fritz at 8:37 AM