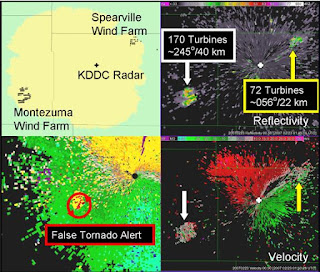 A new document from the National Weather Service expands on potential interference with the weather radar in Montague, used by personnel at Fort Drum.

In addition to the Buffalo and Burlington, Vt. weather stations which cover Jefferson, Lewis and St. Lawrence counties, the document lists impacts to the Albany and Binghamton National Weather Service stations, which also use the Montague KTYX radar.

Among the possible concerns listed in the document for the Binghamton station is that beam blockage from wind turbines could hamper tracking of thunderstorms in Oneida and Madison counties, delaying tornado warnings. It could also make it difficult to track lake effect snow and rainfall, which in turn could delay travel advice and flash flood warnings.

For the Albany station, the document said that clutter from turbines could create false storm identification and tracking over Lewis and northern Herkimer counties, as well as possibly masking lake effect snow.

Who cares about lake effect snow anyway. If you live in Buffalo, you deserve it.

The document was sent out by Jessica A. Schultz with the National Oceanic and Atmospheric Administration and lists the possible impact of wind turbines for the four NWS weather stations that use the weather radar. According to documents published online by NOAA, Ms. Schultz works at the NOAA NWS Radar Operations Center in Oklahoma. Although the document itself is unsigned, the document’s properties list the author as being a JSchultz.

Here is the document from the NWS, which according to the document properties was created by JSchultz – also reproduced below.

So in addition to killing birds and bats, and only providing power when the wind blows the right amount and requiring massive subsidies, wind power also messes with weather forecasts, and make it more difficult for weatherpeople to predict when bad weather will strike. Such a deal!

Wombat-socho has "Rule 5 Sunday: Crash Test Girl" up and running at The Other McCain.
Posted by Fritz at 5:59 PM