You Can't See the Forests For the Powerplant


Greens have discovered to their horror that producing renewable wood pellet biomass requires a large supply of dead trees.


Hardwood forests cut down to feed Drax Power plant, Channel 4 Dispatches claims
Brendan Montague | 16th April 2018
A Dispatches investigation has uncovered evidence of hardwood forests being chopped down to provide ‘green energy’ for the UK. Experts say unique habitats rich in wildlife are under threat as Britain’s power stations switch from burning coal to wood, writes BRENDAN MONTAGUE
Huge areas of hardwood forest in the state of Virginia are being chainsawed to create ‘biomass’ energy in Britain as the government attempts to reach targets to reduce greenhouse gas emissions in efforts to tackle climate change, an investigation by Channel 4 Dispatches has found.
A key part of government efforts to hit its green energy targets is to switch from generating electricity from burning coal to burning wood – or so-called biomass. It’s a policy that is costing taxpayers more than £700 million per year through a levy on their electricity bills.
The biomass industry and government argue that because wood is a renewable source of energy and trees can be replanted to reabsorb carbon dioxide this policy is good for the environment. 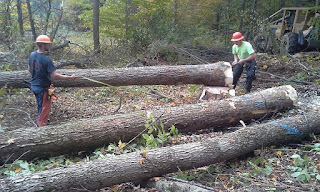 The power station giant claims that burning pellets instead of coal reduces carbon emissions by more than 80 percent.
However, Dispatches conducted a simple experiment at a laboratory at the University of Nottingham to compare the carbon dioxide emitted when burning wood pellets, similar to those used by Drax, instead of coal.
Dozens of scientists
It found that to burn an amount of wood pellets that would generate the same amount of electricity as coal it would actually produce roughly eight percent more carbon.
…
Read more: https://theecologist.org/2018/apr/16/hardwood-forests-cut-down-feed-drax-power-plant-channel-4-dispatches-claims

Lets hope the next Dispatches investigation is a wind turbine special titled “where have all our birds gone?“.

Burning wood for heat (which is all a power plant does, with either wood or coal) is slightly more efficient than coal in terms of CO2 produced, because wood is also partly hydrogen, being a long chain carbohydrate. However, most of the claims of carbon dioxide savings is due to the renewable nature of wood. In theory, you can burn the wood, producing CO2, while existing trees continue to soak up equivalent amounts of CO2 from the air to build biomass. However, to run that as a cycle with no net output of CO2 would require an enormous forest tract to tap continuously, and no losses to fossil fuel use in the growing, harvesting, and transportation of the wood for fuel. And I know for a fact that the ships carrying the wood from Virginia to England don't run on wood, electricity, wind power or nuclear. They use oil, either diesel or bunker oil.