Using Oysters to Mix Up the Dead Waters of Chesapeake Bay


Chesapeake Bay Foundation scientists put reef balls laden with oyster spat into the Severn River on Wednesday — not to grow oysters, but to see if they might break up dead zones of low oxygen.

It’s an experiment. Can man made oyster reefs create enough turbulence in the water to improve oxygen levels in the water column?

The deepest areas of a waterway lose oxygen first because the waters are heaviest due to higher salinity content and cooler temperatures. Layers of water nearer the surface tend to have higher dissolved oxygen needed for aquatic life to survive.

Marine life will not survive in low oxygen conditions. But if the water column is mixed it helps distribute what oxygen is left, improving conditions for fish and other species.

“We know historic oyster reefs grew up in to the water column. They looked more like Manhattan skylines than the flat oyster beds we think of today,” said CBF Maryland Fisheries Scientist Allison Colden. “This project will test whether man made oyster reefs with vertical structure agitate currents and break up dead zones.” 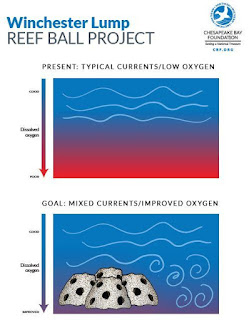 If the experiment proves successful, that the agitated water flow helps increase oxygen, it could provide even more reason to accelerate oyster restoration efforts in the bay region.

On Wednesday the researchers and crew of CBF’s oyster restoration vessel, Patricia Campbell, placed 120 of a planned 240 reef balls in an area called the Winchester Lump, a rise in the river bottom where a large oyster reef existed, about a half mile north of the Severn River Bridge. . .

Regardless of the presence of oysters, such large obstructions place in an area with good flow should make a lot of turbulence. My question is how much homework they did to find whether the spot they put them in will benefit, or is it already pretty well mixed by currents. It should become a pretty good fishing spot in time. Pete's mantra is "current plus structure equals fish."