An enormous load today, after a huge boost from the Morning Report at Aces's: Delusional, Disgraceful Comey Calls PDT "Morally Unfit to be President" in Stephanopoulos Interview,  How Obama's DoJ Tried to Shut Down FBI's Investigation into Clinton Foundation, Loretta Lynch Slams Comey in Pre-Stephanopoulos Interview Communique, Trump Court Filing in Michael Cohen Case: Objects to DoJ/FBI "Taint Team" Deciding What is Attorney-Client Privileged, Andrew McCabe and James Comey Deserve Each Other, This is War and There Will be Blood, Ex-DoJ Officials Urge Congress to "Forcefully Respond" if PDT Fires Mueller, Greenfield: After Syria, Will NeverTrumpers Apologize for Russia Smear?

Transcript: James Comey's interview with ABC News chief anchor George Stephanopoulos, James Comey Says 'Yes,' He Shifted 'to Collecting Evidence of a Crime' in His Trump Notes,  Comey: ‘My Wife and Girls’ Marched in Anti-Trump Women's March He should have, too. Lanny Davis? Admit it, James Comey: You’ve been lying all along,  Comey’s last stand for the deep state, James Comey Is Hurting The FBI, Just when you thought James Comey couldn’t get any more insufferable, HELLO HOLLYWOOD!? Too bad Andre the Giant is dead. He'd be perfect for the part.  James Comey proves he only cares about himself despite his oath to the constitution. Damning with faint praise Paul Ryan says Comey is a man of integrity ‘as far as I know’ ""Look. I'm not going to try and help sell some books here," Ryan responded, maintaining during the exchange that he did not know the former FBI director well. At WaPo" One major area where Comey has some explaining to do. Why limit yourself to one? There's plenty to share. Risks loom for Comey's book blitz Anything for a book. He's unemployed, you know. Trump Threatens Comey With Jail Time in Unhinged Tirade One man's unhinged is another man's passionate. James Comey book: President Obama and Loretta Lynch 'jeopardized' the Hillary Clinton email investigation And that was a feature, not a bug.  The FBI's revenge. I think it's past time to re-think the FBI and reconstitute it. Lordy: Comey appears on ABC News infomercial shilling new book. Billy Mays was more convincing.


Ann Althouse reading it so we don't have to: Reading the Comey interview transcript, I get a "Cat Person" vibe. and she doesn't mean it in a good way. Alhouse also brings to light Trumps 4 tweets on Comey. just to start:

I never asked Comey for Personal Loyalty. I hardly even knew this guy. Just another of his many lies. His “memos” are self serving and FAKE!
— Donald J. Trump (@realDonaldTrump) April 15, 2018


How Do You Like Them Apples? Seriously? Further examples of Comey's bloviating prose, and even some anti-Trump poetry. I thought this was parody, but apparently it's not. " Loretta Lynch drops the hammer on James Comey If things work out right, they can both lose.

McCabe, Comey, Lynch all throwing each other under the bus is interesting ...
— Mollie (@MZHemingway) April 15, 2018


Andrew McCabe and James Comey Deserve Each Other But the real question is what did we do to deserve them? Dem Rep: Those Who Besmirch The Good Names Of James Comey And Robert Mueller Will Rot In Hell A charge of blasphemy? How quaint I thought they wanted to keep religion out of government? It’s all downhill for Comey now. 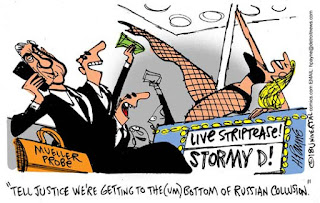 And now, on to Mueller. Of Course Trump Can Fire Mueller. He Shouldn’t. Probably true, but I can't help thinking what fun it would be to set a special counsel on a special counsel. No one should be above the law. Special Prosecutorial Abuse,  Robert Mueller’s Excellent Adventure, Paul Ryan: Not 'necessary' to bring up bill to protect Mueller and probably not constitutional either, not that that matters anymore.  Prague Summer Returns! How could Michael Cohen have been to Prague? Tom McGuire thinks he knows.

I think the problem here is that Boot insists on treating everything as a subset of the one story that he is focused on: blasting President Trump. It doesn’t seem to occur to him that two things could be independently true here. First, Trump really did go after McCabe and celebrate his firing. Second, McCabe is a self-serving liar who deserved to be fired.

After The Inspector General Report, Questions Grow Over The Lack Of A Criminal Referral For McCabe. Asking for Michael Flynn, Carter Page and George Papadopoulos. 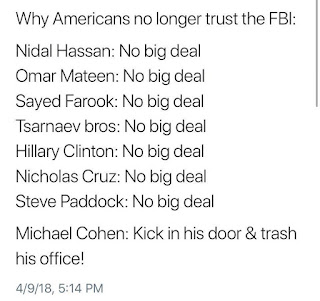 The Dersh: For ACLU, getting Trump trumps civil liberties


Imagine that the search was of your lawyer’s office, or your doctor’s office, or your spouse’s computer, or the rectory of your priest. And imagine that government agents got to read the most intimate privileged communications between you, your lawyer, your doctor, your spouse or your priest. Would it be enough that the government (and the ACLU) told you that the information wouldn’t be used in a criminal case against you? Would you believe that your civil liberties had been violated as soon as government agents read this material? Would you trust government agents not to leak embarrassing information about your conversations, especially if you were a controversial public figure?

The ACLU does not address any of these questions, because the person whose lawyer’s office was searched was Donald Trump. And virtually every contributor to the ACLU voted against Trump, as I did.

Scandal Surfing with Tom McGuire. Judith Miller, the reporter who was jailed until she "testified" against Scooter Libby: Trump was right to pardon 'Scooter' Libby


In 2007 I had testified against Libby, saying that I thought he and I had discussed Valerie Plame, a CIA agent whose identity he was said to have leaked to the media to punish her husband for challenging intelligence about weapons of mass destruction that President George W. Bush had cited to justify the 2003 war in Iraq.

Critics of the war were outraged and demanded an independent investigation of the leak by a special prosecutor. While Libby was never charged with leaking Plame's name, he was convicted of lying to the FBI and a grand jury and of obstructing justice in the leak investigation.

So why would I be pleased with Libby's pardon? Because after leaving jail and investigating the case, I unearthed information that convinced me not only that my testimony was in error, but that Libby was the victim of an overzealous prosecutor whose investigation should have ended before it began. . .

The parallels are striking.
Posted by Fritz at 9:47 AM