A couple of big items. First,  by way of Wombat-socho's "In The Mailbox: 04.19.18", Legal Insurrection gives us the good news that DOJ IG Sends Criminal Referral of McCabe to U.S. Attorney of DC

CNN has reported that the Department of Justice’s inspector general sent a criminal referral of former FBI Deputy Director Andrew McCabe to the US attorneys office in DC.

Last week, the IG office published its report on McCabe revealing that McCabe authorized a leak to The Wall Street Journal in an attempt to boost himself, but lied to investigators and former FBI Director James Comey.


McCabe has been fired, the OIG has branded him a liar, and now he appears to be headed for criminal prosecution. Meanwhile, his friend Comey is on a nationwide self-adoration tour promoting his best-selling self-aggrandizing account of how he repeatedly saved America from the forces of darkness thanks to his moral superiority. And, oh-by-the-way, Andy’s a liar.

I wouldn’t be surprised if, under these circumstances, McCabe’s head exploded. But hopefully, before that happens, McCabe and his legal team will strike back by sharing publicly the sworn testimony and documents that they claim prove Comey’s a liar.

I'd rather see Comey in jail than McCabe, but both would suit me fine.  McCabe Faces Possible Criminal Charges, But Are Hillary and Company Next? One can always hope.

The other big event of the day were reports that Deputy Dawg Rod Rosenstein has told President Trump he not a target in the investigations swirling around his attorney, Michael Cohen or in the Mueller probe: Trump allies press Rosenstein in private meeting in latest sign of tensions,  Rosenstein Tells Trump He’s Not a Target in Mueller, Cohen Probes


Deputy Attorney General Rod Rosenstein told President Donald Trump last week that he isn’t a target of any part of Special Counsel Robert Mueller’s investigation or the probe into his longtime lawyer, Michael Cohen, according to several people familiar with the matter.

Rosenstein, who brought up the investigations himself, offered the assurance during a meeting with Trump at the White House last Thursday, a development that helped tamp down the president’s desire to remove Rosenstein or Mueller, the people said.

to which the standard reply is "Watch out, it's a trap!"


Rosenstein’s message may have been based on a technicality. Trump may not officially be a target, but Mueller hasn’t ruled out making him one at some point in the future, according to a U.S. official with knowledge of the unfolding investigation.

Ace:   "I don't believe it, and prosecutors lie a lot about whether you're a target or not." This one also breaks the news that Rudy Giuliani has joined the presidents legal team: Rosenstein Claims (Like Comey Did Before Him) That Trump Is Not the "Target" of Muller's and the DOJ's Probe Into Cohen; Guiliani Joins Trump Legal Team to Try to "Negotiate" an End to the Mueller Probe


It's a bad idea. It signals vulnerability and will just encourage them. Prosecutors only negotiate plea deals to spare them the use of some resources in some cases.

When a prosecutor has unlimited resources, and when he's a partisan hunting the biggest of big game, why would he "negotiate" anything? Even if he comes up with nothing, he gains something by just keeping this shit-show going for years and years. He ties down the president, his political enemy.

Rudy Giuliani joins Trump legal team, hopes to end Russia probe in ‘a week or two’ I have my doubts. Democrats are having too much fun.  Rudy Giuliani Joining Trump’s Legal Team ‘For the Good of the Country’, BIG LEAGUE: Giuliani Looks To Swiftly End Mueller's Investigation 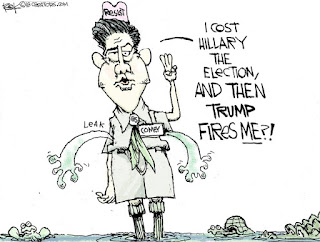 In the ongoing Comey comedy: Figures. Dirty Cop Comey Was Only Taking Pre-Screened Questions at First Book Signing Event in NYC I'd like to see him grilled honestly. Jonah Goldberg: The Comey–Trump Dance They're both attention seeking narcissists. I thought conservatives cared about character and values, Comey whined. We tried it for decades. It didn't work. Jonathon Turley: Comey 'tell-all' violates all rules of justice Rules are for the little people.


Trump may not have had the benefit of all of this information at the time he removed Comey, but in terms of whether Comey was the right person to serve as head of the FBI under the new administration, Trump’s instincts proved to be correct. 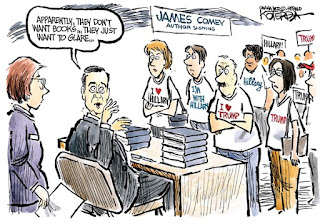 Far-right activist interrupts Comey book event I don't like it when lefties do it without consequences, but I don't believe we should unilaterally disarm either. No one likes James Comey. Well, he has a wife and kids (Hillary partisans) and maybe a dog. Trump complains that Comey is making money off his book while Flynn’s life is ‘totally destroyed’. There is that.

Justice Dept. turns over James Comey's memos on talks with Trump and immediately this leaked Comey: Trump says Putin bragged about Russia having the 'most beautiful hookers in the world'. Well, it's true. Comey memos offer new details on his interactions with Trump as the FBI’s Russia probe intensified. Sheryl Attkisson: Trump Was Right To Fire Comey; Here Are 12 Reasons Why:

Joseph E. diGenova tells it like it is: The Politicization of the FBI


Over the past year, facts have emerged that suggest there was a plot by high-ranking FBI and Department of Justice (DOJ) officials in the Obama administration, acting under color of law, to exonerate Hillary Clinton of federal crimes and then, if she lost the election, to frame Donald Trump and his campaign for colluding with Russia to steal the presidency. This conduct was not based on mere bias, as has been widely claimed, but rather on deeply felt animus toward Trump and his agenda. 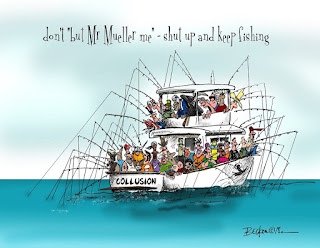 Senate panel will vote on bill to protect Mueller despite McConnell's opposition. It will never pass the house, and if it does, Trump would veto it, so what's the point again? At Manafort Hearing, Judge Weighs Scope of Mueller’s Authority


A federal judge expressed doubt Thursday over efforts by former Trump campaign manager Paul Manafort to have criminal charges against him dropped, but she appeared more receptive to his request to dismiss one of the counts.
. . .
Judge Berman appeared more receptive, however, to another argument from Mr. Manafort’s legal team, that two of the counts in the indictment against Mr. Manafort essentially charge him with the same crime.

A prosecution on both counts, Mr. Manafort’s lawyers argued, would seek to punish him twice for the same alleged offense.

Would A Prosecutor Ever Misuse His Powers To Remove A Political Opponent? Yes, let us re-count the ways. . .


Here's a summary of the above:  Seven indictments, all by Democrat prosecutors against high-ranking Republican office-holders, and all with a potential to influence political control of some important government body.  Of the seven prosecutions, one (Greitens) has not yet gone to trial (and may never), one (Perry) was dismissed on motion before ever going to trial; but the other five all resulted in convictions -- all of which were subsequently reversed.  Of the five convictions, three were then undone by the trial (Stevens) or appeal (DeLay, McDonnell) courts in ways that precluded retrial, and one (Bruno) resulted in an acquittal on retrial.  Skelos awaits retrial.  The number of convictions that have stuck: zero.  Meanwhile, the Congress flipped from Republican to Democrat control after indictment of the Republican Majority Leader, the Senate got its 60th Democrat Senator just in time for the Obamacare vote, the governorship of Virginia flipped from Republican to Democrat just prior to the indictment of the outgoing Republican governor, and the New York State Senate flipped from Republican to Democrat majority after conviction of the Majority Leader.

By the way, can you think of a single example of a Republican prosecutor prosecuting a Democrat officeholder on a dubious charge in a similar swing situation with the potential to change political control of some important body?  I cannot.


As the likelihood of the charges of Trump campaign “collusion” with Russia seems headed toward zero, the likelihood of proof of a different form of “collusion” seems headed upward toward certainty.
. . .
Meanwhile, the evidence builds of collusion by the Obama administration's law enforcement and intelligence personnel in trying to elect Hillary Clinton and defeat and delegitimize Donald Trump in and after the 2016 presidential election.

We Must Protect Attorney-Client Confidences - It’s wrong to celebrate the fact that Sean Hannity’s name was revealed in open court. Right, wrong, who cares? It's the agenda, man! Who is Kimba Wood? Judge on Cohen case officiated Soros wedding, was Clinton AG pick. Nothing to see here! Andy McCarthy: Sean Hannity’s Outing Violated Legal Standards, again, standards are for Republicans! CNN Washes Out Its Own Role in Outing Hannity's Legal Chat with Michael Cohen


According to reports from inside the courtroom, Judge Wood was ready to allow Michael Cohen to submit the name of his third client — who we now know is Sean Hannity — under seal, but an attorney for five news organizations, including CNN and the New York Times, convinced her otherwise.
. . .
CNN’s Shimon Prokupecz confirmed the 'under seal' part, but omitted that the attorney was representing his employer. Prokupecz merely tweeted: "I was in court yesterday and if it wasn’t for the attorney representing the press, Sean Hannity’s name would have been filed under seal. Judge Kimba Wood was ready to accept the name under seal, when the attorney representing the press stood up and argued successfully against it." 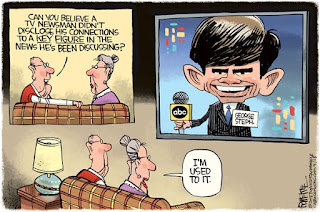 
CNN’s Jim Sciutto is the network’s chief national security correspondent who also serves as a fill-in anchor for Jake Tapper and Erin Burnett. He has quite the prominent role considering the fact that he’s a former Obama administration official. You can’t even find Obama’s name in Sciutto’s full bio on CNN’s website. Isn’t he obligated to tell his viewers that he had served in the previous presidency, which has its animus towards the current one?

Then there’s also the face of ABC News, George Stephanopoulos, who famously served as White House Communications Director for President Bill Clinton. But no one seems to think it’s a “conflict of interest” when he interviews people like Hillary Clinton or former FBI Director James Comey.

And we can’t forget all those reporters who were exposed aiding the Clinton campaign in John Podesta’s hacked emails during the 2016 election. Glenn Thrush, who at the time worked for Politico, sent Podesta drafts of Clinton puff pieces for him to approve and even referred to himself as a “hack.” And what happened to him? He got a better job at The New York Times. NYT reporter Mark Leibovich emailed Palmieri to ask permission about what portions of an interview with Hillary Clinton he could use. Was he ever suspended? No. CNBC’s John Harwood, who co-moderated a GOP primary debate, asked Podesta what sorts of questions he should ask Jeb Bush during an interview. Did anyone call for his firing? Of course not.


“They’re going to squeeze him like a grape. I think in the end he’ll pop unless Trump pardons him,” said Paul Rosenzweig, a senior fellow at the nonprofit R Street Institute and a former senior counsel during independent counsel Kenneth Starr’s investigation into President Bill Clinton.

Trump’s problem isn’t that he has bad lawyers. It’s that he’s a bad client. Both can be true, embrace the healing power of "and."


For a lawyer, this is the job. We go to war with the client we have, not the client we wish to have. That’s a good thing: We’re all flawed; we all do foolish things. It’s a privilege to fight vigorously for someone regardless of their mistakes, just as we would want to be supported when we err.