A Reasonable Amount of Russiagate 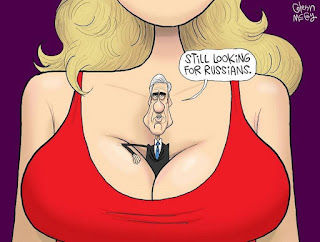 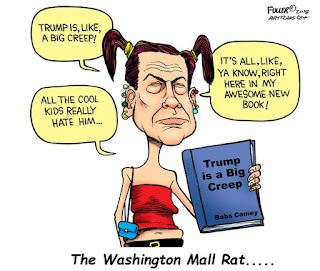 Comey's whole household supported Clinton, but he's sure the bias didn't affect him: Real Housewives of the FBI


"I didn't take a poll among all the kids, but I'm pretty sure that at least my four daughters, probably all five of my kids, wanted Hillary Clinton to be the first woman president," Comey said in an interview with ABC's George Stephanopoulos.

"There was a lot of passion in this house for Hillary Clinton. And I – I get that," he added. "But again, I hope it illustrates to people that I really wasn't making decisions based on political fortunes." 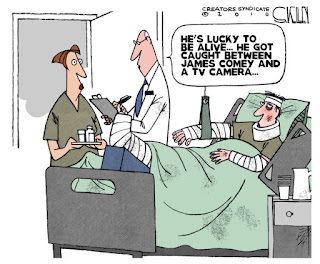 Is Comey facing criminal charges for leaking his memos? Does Rod Rosenstein’s Comey Memo Response Indicate Possible Criminal Review?… If so, they should snatch his book earnings.


Yesterday, in response to congressional committee demand by Chairman Goodlatte (Judiciary), Chairman Nunes (Intel) and Chairman Gowdy (Oversight), for the memos written by James Comey, some of which were leaked to media, Asst. Attorney General Rod Rosenstein has asked for additional time for DOJ review.

According to Gregg Re:


“Department officials are consulting with the relevant parties … one or more of the memos may relate to an ongoing investigation, may contained classified information, and may report confidential Presidential communications, so we have a legal duty to evaluate the consequences of providing access to them,” he wrote. (link)

There is some speculation Rosenstein’s notation of memos relating “to an ongoing investigation” would indicate James Comey’s legal risk might be: (1) part of the discussion; and (2) part of the criminal evidence in the larger review by John Huber.

Comey and Brennan, Leaders of the Coup. When you strike at the king . . . 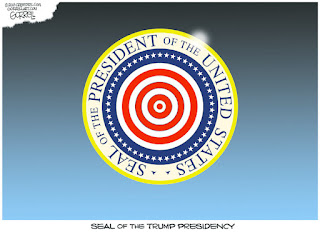 Devin Nunes: 'It's possible' the Russians have dirt on James Comey, I can almost guarantee it. It's what they are, it's what they do. Better put him in jail now,just in case.

Nunes and Hannity were reacting to Comey's ABC interview in which he said it was "possible" but "unlikely" that Trump is compromised by Russian operatives in the wake of unsubstantiated claims made in the controversial Steele dossier.

Paul Ryan and James Comey made the same silly mistake. They thought Hillary was going to win.


As Comey confessed to ABC’s George Stephanopoulos, he went public with his decision to revisit the investigation into the former secretary of state’s emails at the campaign’s end because “I was operating in a world where Hillary Clinton was going to beat Donald Trump. . . . That she’s going to be elected president, and if I hide this from the American people, she’ll be illegitimate the moment she’s elected, the moment this comes out.”

For his part, Ryan spent 2016 getting ready for a post-Trump Republican Party cleanup operation. Trump’s future chief of staff, then-Republican National Committee chairman Reince Priebus, “told Ryan on Election Day that Hillary Clinton would win the presidency,” Tim Alberta reported in Politico on April 12, “and Ryan was prepared to give a speech soon afterward divorcing himself — and the party — from Trump once and for all.” 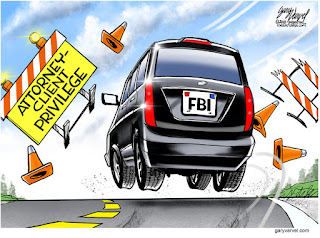 They misunderestimated him and misoverestimed her. NBC/WSJ Poll: Hillary's Extraordinary, Enduring Unpopularity She just not that likable. She could be a villain in a Shakespeare play. Clinton Campaign, DNC Laundered $84 Million to State Parties To Avoid Campaign Finance Laws – Report. I think campaign finance rules are a violation of free speech, just to name one right, but if there are going to be laws, they need to be enforced equally. Hillary Clinton’s Judges Destroy Attorney Client Privilege - What are a few civil rights violations between friends? Which is amazingly hypocritical since she's hid behind that privilege so many times herself.

FOX NEWS statement on Hannity: "While FOX News was unaware of Sean Hannity's informal relationship with Michael Cohen and was surprised by the announcement in court yesterday, we have reviewed the matter and spoken to Sean and he continues to have our full support."
— David Folkenflik (@davidfolkenflik) April 17, 2018


Good move. It's none of their business who he chooses to get legal advice from. And the people whining about it don't really care either, it's just a means to attack Hannity and Fox News both.
Posted by Fritz at 8:41 AM