A big one to end the Washington D.C. week. Jeff Greenfield: The Left’s Year of Magical Thinking, Fantasies about the Second Amendment, the Mueller investigation and Stormy Daniels threaten to sabotage the Democrats in November.

Finally, I’d add to this list what I call “magical cable news thinking.” My anecdotal sense is that countless liberals are drawn to the never-ending, numbing procession of TV panel after TV panel, all focused on the Mueller investigations and what they might yield. (Stormy Daniels has now become the second obsessive subject.) Whenever I click on CNN during prime time, it feels like Groundhog Day. Each hour seems to promise that any minute now, federal marshals will parade down Pennsylvania Avenue with warrants and cuffs. And for many Democrats, the promise of a House takeover in 2019 is that impeachment hearings will begin roughly 30 minutes after Paul Ryan hands the gavel over to Nancy Pelosi (or her successor).

Maybe one or both of these events will transpire, although it’s hard to divine much from the reported communication from Mueller to Trump’s lawyers that the president is a “subject” but not a “target” of the special counsel’s investigations. But if Democrats should have learned anything from 2016, it is that the low regard in which most Americans hold Donald Trump does not necessarily translate into votes for Democrats. 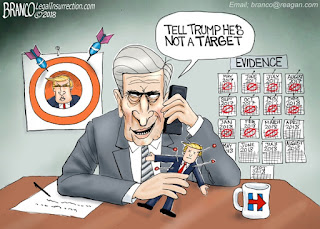 
Mueller’s conclusions about obstruction of justice, which probably will explode into public view by June or July, will rock Congress, especially Republicans running in 2018.

If Mueller does charge that the president committed obstruction of justice, the minute that report becomes public (which it certainly will one way or the other) there will be a huge public firestorm. The issue of impeachment will take center stage.

If he does not directly charge obstruction of justice, the report will almost certainly include negative facts and findings that will put Republicans on the spot while other aspects of the Mueller investigation continue, and more indictments and plea bargains are announced, from now through Election Day.

More anonymous sources say: Mueller has evidence that Trump supporter's meeting with Putin ally may not have been a chance encounter. Why is that important?


The contact between Prince and Dmitriev took place in January 2017, two months after the election. Prince has denied that he intended to meet with Dmitriev as the purpose of the trip, and denied that he was working on behalf of Trump to set up a “back channel” to Moscow. Even if he had been doing so, though, it wouldn’t have been illegal or inappropriate. Trump was already the president-elect and had been working the transition for two months at that point. There is no law preventing a president-elect from trying to set up unofficial diplomatic connections; in fact, we expect presidents-elect to be ready to govern on Day One.


The search warrants applied to properties, a storage unit, bank accounts, email addresses, and other devices, according to the court documents.

Mueller seized bank accounts in Manafort probe The trouble with prosecuting a rich man is that he can afford the best legal help money can buy. Mueller is trying to fix that. It's despicable.


Manafort is currently facing two separate indictments. One, in Washington, focuses on money laundering and foreign lobbying. Another, in Alexandria, Virginia, involves tax fraud, bank fraud and failure to report overseas bank accounts. The 69-year-old Manafort could potentially spend the rest of his life in prison if convicted in either case.

Neither case appears to directly relate to the allegations of collusion between the Trump campaign and Russia that are at the heart of Mueller's mandate, but it was revealed this week that Deputy Attorney General Rod Rosenstein specifically authorized the special counsel's team to pursue the financial and foreign lobbying allegations against Manafort.

Salarymen swamp dwellers hate rich businessmen with an unholy passion. Joe diGenova Unloads on Rosenstein: 'Incompetent,' 'Disgrace' and 'Coward' Who Should Be Fired

It would also seem to me that Rod Rosenstein is hopelessly conflicted in this matter, with all his subordinates and friends having been caught cheating. Regarding Trump being interviewed by Mueller:


"What does he want to question him about?!" he asked angrily. "He cannot question him about the firing of Comey. That is an Article II constitutional authority that the president has to fire Comey!" diGenova exclaimed.

"This is a perjury trap!" he declared. "This is nonsense. This is absolutely outrageous! It should end right now."

William Jacobsen at Legal Insurrection: “Trump would be crazy if he goes into a verbal back and forth with Mueller” “There is nothing, zero, that Donald Trump can tell Robert Mueller that Robert Mueller does not have another source for.” But CNN reports: Trump begins informal prep for potential Mueller interview


In May, June and July 2017, while FBI Deputy Director Andrew “Andy” McCabe was lying to FBI investigators and the Inspector General, Lisa Page was working for McCabe as his legal counsel.

Therein lies the heart and origin of the motive for Lisa Page to flip against the conspiracy group when she discovered Andrew McCabe lying to investigators about his instructions to her. IG Horowitz then interviews Page in July and she tells the truth, thereby contradicting McCabe.

However, Ms. Page had the evidence – The Text Messages delivered July 20th.

Thus answering the question posed yesterday "Why haven't Peter Strzok and Lisa Page been fired?" I was right, they're singing like birds. Meanwhile the rest of the swamp people at DOJ continue to resist Congress's efforts to shed light on them: DOJ misses House Judiciary subpoena deadline for documents on Clinton probe, alleged FISA abuses, because, there's only one person working there, and she's trying to impeach Trump. Why the FBI Is Dodging Nunes. Let's not make this too complicated, it's because they're used to getting away with it. Five Ways Congress Can Stop the FBI’s Trump-Russia Cover-Up

Better do it quickly, if you're afraid the Republicans might lose the house. And sauce for the goose? Lewandowski To Democrats: I’m Not Answering Your “F—Ing” Questions. Actually, the headline is not quite true:


But Lewandowski, who agreed to come back to the committee a second time in March after initially refusing to answer questions about topics occurring once he left the campaign in June 2016, was in no mood to give Democrats anything they wanted, saying he would only answer “relevant” questions.

And, according to four sources with direct knowledge of the situation, the Trump confidante repeatedly swore at Democratic lawmakers to make the point he wasn’t going to talk further.


“He is acutely aware of the value to Russia of exacerbating the political tension that grips our country. Putin’s goal is to weaken our democratic institutions, including intelligence community agencies, which are responsible for countering Russia’s espionage onslaught on our country,” he writes.

What do you expect from a guy who voted for Gus Hall. And there goes Trump, colluding again: Trump Admin Hits Russian Oligarchs With New Sanctions.

Not really Russiagate, but related: How $37 Million from the Clinton Foundation Disappeared in Baltimore


Here’s a question for which Deputy Attorney General Rod J. Rosenstein, special counsel Robert Mueller, and former FBI Director James Comey may well know the answer to — but aren’t likely to want to talk about in public, under oath:

Why did the Clinton Foundation send a $37 million grant for the Clinton-Bush Haiti Fund in 2010 to a Baltimore post office box when the CBHF told federal tax authorities that its only office that year was in Washington, D.C.?

For the rest of us, the answers to that and many other questions posed by those who wonder why investigations into obvious and rampant frauds involving Bill, Hillary and Chelsea Clinton and their purported foundation never go anywhere are complex. But they’re worth following if you care about combating charitable fraud.

Be prepared, because the answers also make clear that too many powerful people were and are covering up an odious set of scandals that implicate Establishment Republicans and Democrats alike.

Well worth the time to read it all.
Posted by Fritz at 9:53 AM