Way Too Much Russiagate

Really too much to excerpt much: A summary of yesterday's and this morning's early offerings:


American Thinker: Guess Whose House Wasn’t Raided By The FBI
Power Line: What is The FBI Hiding? (4)

The 2016 election broke some people in media, I guess there might have been some unbroken.

Byron York: Lots of Mueller action, but what about collusion? Still not seeing it.

Talk to Mueller? No, Trump Should Use His Bully Pulpit to Expose Mueller's Corruption Istill think Trump needs to make Mueller testify under oath.

Bipartisan Senate Effort: Operation Protect Mueller Begins or as Ace puts it: Senate Judiciary Committee to Consider Bill To Forbid Trump from Firing Mueller, Which Would be Both Bipartisan and Unconstitutional As someone say, if Mueller can't be fired by Trump, the office is unconstitutional. Spineless Republican Leaders Back Mueller

Quinnipiac: 55% Of Republican Voters Say “Don’t Fire Mueller” I agree it's mess you don't want, but having Mueller under oath would be an interesting twist.

Incompetent Deep Stater Robert Mueller Sinks Lower, Hooks Up with Stormy Daniels to Bring Down Trump Now there's an image that will haunt me.

The New Republic sets out Robert Mueller’s Nuclear Option. What, actually talk to the people? He's not allowed, which is why he leaks like a sieve. 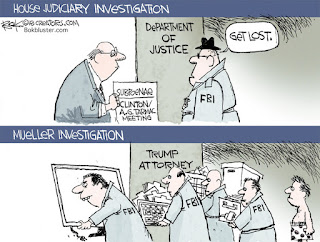 NYT Editorial: If Trump Is Innocent, Why Is He Worried About Attorney-Client Privilege? Fine, let's hack and leak all of the NYT's attorney's records.  Guess Whose House Wasn't Raided by the FBI Clinton or her lawyers. 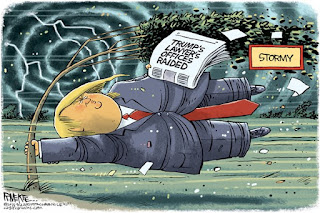 Watergate Every Week: Using the FBI to Suppress a Political Revolution

The raids of Michael Cohen’s hotel room, home and office are just this week’s Watergate.

Political operatives have now seized privileged communications between the President of the United States and his lawyer. Despite fairy tales about a clean process, these communications will be harvested by the counterparts of Peter Strzok, who unlike him are still on the case at the FBI, some of it will appear in the Washington Post and the New York Times, and some will be passed along to other political allies.

The Dersh: Rosenstein Must Be Recused Both a witness and a prosecutor in the same case.

Devin Nunes suggests he has a plan to go after Rod Rosenstein and Christopher Wray, More specifically: Nunes Threatens to Impeach FBI's Wray and DOJ's Rosenstein Over Key Document, then Rosenstein Finally Gives House Committee the Unredacted Electronic Document That Spurred the Russia Investigation -- But Only After Threats That the House Might Impeach Rosenstein and FBI Director Wray If They Continued Hiding It I guess it wasn't quite as important as their jobs. But it still had minor redactions. Name of individual and country? DOJ Caved, but Jordan Says Impeachment Threat Remains, Resignation, contempt of Congress also still 'on the table' for Rosenstein, Sessions and Wray if they don't comply fully with congressional subpoenas. You know Lisa Page and Peter Strzok still have sufficient clearances to see it unredacted? I asume that's because they're co-operating with the IG.

ABC: Comey compares Trump to mob boss, The Death of the DOJ and the FBI. Both have become hyperpoliticized at the upper levels. It's beyond draining the swamp. They need to be nuked, to remind the survivors that they don't run the country. Byron York: If Comey talks to sell books, why not to Congress?

CNN worried about the GOP plan to discredit Comey When Will The Media Finally Get Over The 2016 Election? Probably when the last reporter of this era dies or goes senile in his/her nursing home.


Someone obviously knew ahead of time that the office and home of Donald Trump’s personal lawyer, Michael Cohen, had been raided by the FBI at the behest of Special Counsel Robert Mueller.

Before the close of trading, the Dow Jones industrial average was up by as many as 440 points, but it ended Monday’s session with just a 46-point gain.

The drop in stock prices started before the news of the FBI raid was reported, so it’s clear that someone had the information ahead of time. But in this day and age of wild stock price fluctuations, insider trading on such news is small stuff.

So I’ll let it go, just as the Securities and Exchange Commission seems to have.

Senator Demands Zuckerberg Fire Staffer Who Let Obama Campaign Steal User Data But will Zuck fire himself?
Posted by Fritz at 9:43 AM