Reason 5922 That Trump Was Elected

But the leaders fell short of agreeing to specific steps toward denuclearization, setting the stage for more difficult negotiations and raising the stakes for the first-ever U.S.-North Korean summit, which is expected to be held in coming weeks.

President Donald Trump enthusiastically welcomed the results in a pair of tweets.

“Good things are happening, but only time will tell!” he said. “KOREAN WAR TO END! The United States, and all of its GREAT people, should be very proud of what is now taking place in Korea!”

Or, as Don Surber (conveyed by Wombat-socho's "In The Mailbox: 04.27.18") put it: Photo made possible by electing Donald Trump president 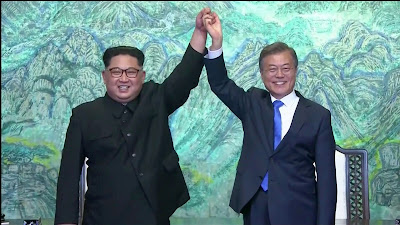 Of course, this doesn't mean it's a done deal, but it's better than waiting until Kim lobs a nuclear missile on San Francisco to pay attention.

Wait a minute, let me think about that.

Thanks to Andy for the first link. 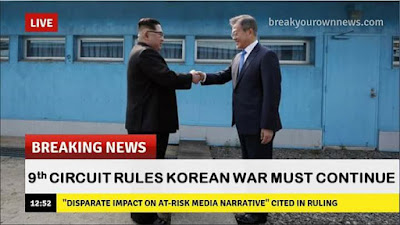 Thanks, Bill! Linked at Pirate's Cove in the weekly "Sorta Blogless Sunday Pinup" and links.
Posted by Fritz at 1:53 PM