A few days ago we heard that a fresh batch of text messages between DOJ attorney Lisa Page and superduper FBI agent Peter Strzok has been, rather unwillingly, released to Congress, heavily redacted. The Conservative Treehouse has been examining them and has come to the novel conclusion that the Page/Strzok affair story was merely a cover for their testimony against the anti-Trump conspiracy:  An Updated Review of Details Within Lisa Page and Peter Strzok Text Messaging…

There is zero evidence of a romantic relationship between Peter Strzok and Lisa Page; and no, a complete chronological review doesn’t indicate the romantic stuff was withheld.  By looking at the messaging chronologically, studying the date and times, there’s nothing to indicate segments of romantic stuff was removed.  What does appear obvious in many redactions, and likely some removals of messages, is an intentional effort to remove content that would be of an embarrassing professional nature to Ms.Lisa Page.

It is more than likely the “affair narrative” was likely created by investigators as part of an agreement on content control to explain withholding some information and message redactions.  Investigators would not want those being investigated to know the scale of the evidence trail.  Regardless, except for the useful story, the romantic angle is irrelevant.

It is clear that when Lisa Page gave FBI INSD (Inspection Division) authorization to access *all* her communication and messaging *accounts* and devices (July 15 – 20th, 2017) the FBI INSD and Office of Inspector General (OIG) agreed to redact snarky interoffice material that would be embarrassing to Ms. Page.
. . .
Page and Strzok carefully maneuvered to shape the internal activity by their immediate supervisors, Andrew McCabe and Bill Priestap respectively. There’s a particular creepiness in how much the duo guide each other to tell other people specific points and shape opinion, and ultimately action or lack thereof. They’re like two spies inside an allied organization shaping the outcome in the direction of a goal they have agreed to privately.

Their approach also means they must be involved in every important detail of the ongoing effort. And there are a few times where FBI Director of Counterintelligence Bill Priestap pokes Peter Strzok. [May 9th, 2017] Strzok “angry” because his boss “Bill” is starting to question why Strzok needs to have his fingers in everything. “implication is I’m a busy body” etc.

However, there is also a transparent aspect to McCabe and more specifically James Comey being kept away from “small group” details so they can retain plausible deniability on the overall scheme. The Sept/October ’16 Weiner email problem is one such example. Comey’s lack of knowledge, and/or inaccuracy of knowledge, is a public defense; but FBI General Counsel James Baker’s knowledge of what Comey does know is a legal risk. 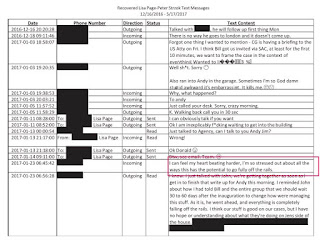 Thread by @Nick_Falco: "1) Last night, more Strzok-Page Texts were released. There are some suspicious texts sent prior to the @GenFlynn interview. Were they talkin […]" #ClearFlynnNow


January 23, 2017, the day before the Flynn interview, Lisa Page says "I can feel my heart beating harder, I'm so stressed about all the ways THIS has the potential to go fully off the rails." Weird!

Thread by @prayingmedic: "23) An anon posted an article about the latest texts which prove that agent Strzok was buddies with Rudy Contreras, the original judge in th […]" #Qanon #FakeNews


The call to Kislyak, the FBI interview, the falsified 302, the kangaroo court, the guilty plea... it was all a smokescreen.
Play acting for the cameras.
Flynn took the [rubber] bullet to appear fatally injured.
Behind the scenes, he was hunting black hats.

Clapper: A leak is an unauthorized disclosure of classified or sensitive information that is improper under ANY circumstance

Clapper: A leak is an unauthorized disclosure of classified or sensitive information that is improper under ANY circumstancepic.twitter.com/slGQPbmjfD
— Katica (@GOPPollAnalyst) April 27, 2018


Gen. Mike Flynn’s Family Aids in His Defense Against FBI and DOJ Frame Up


since Tapper contributed to Clapper’s espionage by accepting his classified information and then sharing it with the masses, he’s equally guilty, according to Barnes.

“[J]ournalists are not exempt from criminal prosecution under the Espionage Act,” Barnes tweeted Friday. “Indeed, it appears what @jaketapper did is worse than what his CIA allies said Assange should go to prison for.”

But it's different when it hurts Democrats.

A database of James Comey: The Biggest Scandals and Controversies in His Career Andrew McCarthy: Comey Confirms: In Clinton Emails Caper, the Fix Was In. FBI Never Investigated Abedin/Clinton Laptop Emails In October 2016…

In DC the FBI (Comey and McCabe) created the appearance of a re-opening of the Clinton investigation to keep control and ensure the investigative outcomes remained out of the hands of the Eastern District (EDNY) and New York FBI field office. They had no choice.

However, once the FBI opened the investigation October 28th, they did exactly the same thing they had done from September 28th to October 28th… they did nothing.

A few days later they declared the second investigation closed, and that was that.

They never expected her to lose.

Levin: The Trump-Russia conspiracy is a ‘coup attempt,’ ‘goes all the way to the top!’ Yep. Obama. Judicial Watch: Deep State Update: An Unparalleled Scandal


The biggest story that Stelter hid from readers was the revelation that Obama's Director of National Intelligence (DNI), James Clapper, leaked information about the infamous anti-Trump dossier to CNN's Jake Tapper and then was rewarded with a contract at CNN.

The development was significant as it further backed up The Federalist's Mollie Hemingway's assertion that CNN helped orchestrate a setup of Donald Trump that was the catalyst that eventually led to the appointment of Special Counsel Robert Mueller.
Once again, Stelter was called out, and he refused to answer . . .

It's all about what stories to hide to protect the Democrats. Facebook Blocks Daily Caller Story On FBI Texts — Blames ‘Spam’ Algorithm.

“Our security systems have detected that a lot of people are posting the same content, which could mean that it’s spam,” Facebook told users who tried to share the story. “Please try a different post.”

Uh huh. They only have 20,000 liberals deciding what stories are suitable for Facebook.

Lawyer suspected of extortion in Hulk Hogan case is same lawyer who demanded hush money for Stormy Daniels. He used nearly the same, word-for-word contract to do it. So why isn't the word 'extortion' used more often in Stormy Daniels coverage? From @CNN: https://t.co/AsEOjvkilj pic.twitter.com/HcaXsinpgy
— Byron York (@ByronYork) April 28, 2018


It's all about what stories to hide to protect the Democrats.
Posted by Fritz at 8:10 AM