Greg Still Looking for His Crabs with Mittens 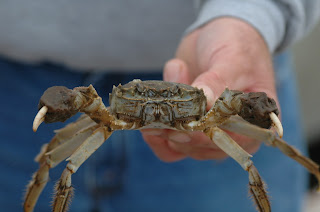 
An army of invading crabs has disappeared. But scientists are skeptical about whether they’re gone for good or simply hiding. Now the search is back on: As warmer temperatures lure people onto the water, Smithsonian scientists are asking watermen and other boaters to report any sightings of the elusive Chinese mitten crab.

Mitten crabs first created a stir in the Chesapeake in 2006. That summer, while working aboard his crab boat Bodacious, a waterman named John Delp caught a Chinese mitten crab near the mouth of the Patapsco River. Shortly after scientists confirmed its identity, an earlier sighting from 2005 also came to light, from waterman Jim Foltz. Farther north, reports began streaming in from the Hudson River and Raritan Bay, where boaters eventually spotted more than 100 crabs, some of them breeding. Scientists began bracing for an invasion. 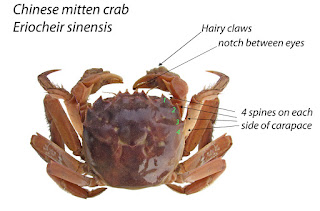 At the Smithsonian Environmental Research Center in Edgewater, biologists set up a mitten crab hotline and website to collect reports of the hairy-clawed crustaceans. They compiled dozens of sightings from 2005 through 2009. But then reports began to slow. Eventually they stopped altogether. The last confirmed sighting in Maryland was in 2009 and in the Hudson in 2014.

“Are they still there? This is the question,” said biologist Greg Ruiz, who leads the center’s Marine Invasions Lab. “I don’t know the answer.”

“You’d think with all of that water, someone should be seeing something,” said Darrick Sparks, a biological technician who helps run the Mitten Crab Watch website with Ruiz.

At first glance, this could be a victory for the home team. Known by their brown shells and signature furry claws, Chinese mitten crabs rank among the world’s worst invasive species. In San Francisco Bay and Europe, they’ve clogged water systems, disrupted fishing and threatened to collapse river banks with their burrows. If they’re truly gone, Chesapeake Bay could have dodged a very expensive bullet.

But there’s another more troubling possibility: The mitten crabs could be slipping under the radar. According to Sparks, there haven’t been many focused searches for mitten crabs anywhere in the U.S. Most reports have come from boaters or anglers who caught the crabs accidentally.

This year, Smithsonian biologists are looking to double their efforts. In a last-ditch attempt to root out any hidden crabs, they’re reaching out to boaters, anglers, scientists and government agencies throughout the country, asking them to report sightings of Chinese mitten crabs. In addition to Chesapeake Bay and the Hudson, they’re also targeting citizens of San Francisco Bay. And they’ve resurrected the Mitten Crab Watch site.

It's hard to believe that a crab as tough as this one got started and died out, but maybe it was founded by too few individuals, and just failed to adapt to a new environment because of a genetic bottleneck. Or maybe something predatory developed a taste for Mitten Crabs.