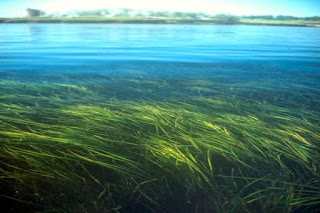 The Chesapeake’s underwater grasses — critical havens for everything from blue crabs to waterfowl — surged to a new record high last year, surpassing 100,000 acres for the first time in recent history.

Scientists credit a reduction of nutrients in Bay waters for the long-term increase in underwater grasses, which support fish, crabs and waterfowl.

“I never thought we would ever see that,” said Bob Orth, a researcher with the Virginia Institute of Marine Science who has overseen the annual Baywide underwater grass survey since it began in 1984. “But things are changing.”

It was the third straight year that acreage of these underwater meadows has set a new Baywide record.

The 2017 survey results, released in late April, came on the heels of a scientific study published in March that credited nutrient reductions in the Bay for a sustained long-term comeback of the grasses over the last three decades — even as those habitats are in decline globally.

Yes, it looks good, but don't get cocky. All it will take to break the streak is some bad spring weather. I don't see it on the horizon yet, though.
Posted by Fritz at 4:08 PM