Comey's Memos Reveal How He Repeatedly Lied To Trump. And remember, lying to Trump is lying to the highest official of the Justice Department. It's lying to the FBI and DOJ, and against the law. Book him, Dano! 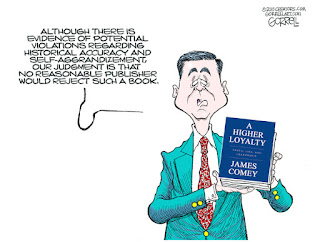 Collins To Comey: Was This Really The Best Time To Put Out A Book? Well, the best time to sell the book is while the subject still commands attention, which it won't after the narrative collapses.

McCabe got the order to shut down Hillary investigation from...Obama?. I doubt it's on tape.


McCabe told the OIG that on August 12, 2016, he received a telephone call from PADAG regarding the FBI's handling of the CF Investigation about FBI agents taking overt steps in the CF Investigation during the presidential campaign (the "PADAG call").  McCabe said that PADAG expressed concerns.  According to McCabe, he pushed back, asking "are you telling me that I need to shut down a validly predicated investigation?"  McCabe told us that the conversation was "very dramatic" and he never had a similar confrontation like the PADAG call with a high level Department official in his entire FBI career.

Russian lawyer questions why Mueller hasn’t contacted her. This seems like a curious omission, since she was at the heart of the closest approach to Russians by the Trump team.


A Russian lawyer who discussed sanctions with Donald Trump Jr. in New York during his father’s 2016 campaign for the U.S. presidency said Sunday that special counsel Robert Mueller has not contacted her yet.

In an interview with The Associated Press, Natalia Veselnitskaya also detailed her recent meeting in Berlin with investigators from the U.S. Senate Intelligence Committee. Like Mueller, the committee is investigating allegations of Russian interference in the U.S. presidential election.

There's no "there" there: ‘No Official Intelligence’ Spurred Russian Collusion Probe, Nunes Says

“It took us a long time to actually get this, what’s called the electronic communication. As we know it now, for your viewers … it’s the original intelligence, the original reasons, that the counterintelligence investigation was started,” Nunes said.

It's all Sid (the Shiv) Blumenthal dirt, gilded by passing it through the intelligence agencies hands. 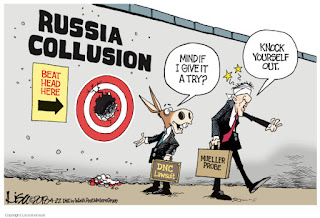 Michael Goodwin: Democrats are getting desperate as Mueller stalls


In a more reasonable era, Rosenstein would blow the whistle and declare, “Time’s up.” As I wrote two weeks ago, he or Mueller should at least end the guessing game and tell the public where the probe stands, where it is going and when it’s going to get there.

To keep it going endlessly suggests Mueller and Rosenstein have their jobs backwards. Instead of trying to find who committed a known crime, they put a target on Trump’s back and are going through his entire life with a fine-tooth comb, determined to find him guilty of something. 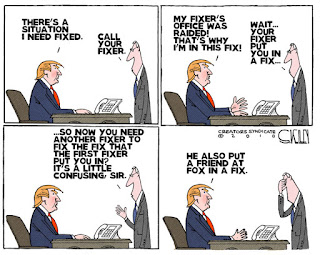 
Manipulating the political process and media on Russia was Act I, playing out in the Mueller investigation.

Act II, as I’ve previously written, is the SDNY investigation of Michael Cohen on a referral from Mueller. That Act II, even more so than Act I, is a more direct attack on Trump’s business dealings and history than Mueller could justify keeping under his jurisdiction.

That Act II starring Michael Cohen is an attack on Trump is suggested by none other than the co-founders of Fusion GPS, Peter Fritsch and Glenn R. Simpson, in an Op-Ed in the house organ of the Resistance, the NY Times, The Business Deals That Could Imperil Trump


Put aside Russian collusion for a moment. Press pause on possible presidential obstruction of justice. Forget Stormy Daniels. The most significant recent development involving the president may be that the special counsel, Robert Mueller, has subpoenaed Trump Organization business records as part of his inquiry into Russian interference in the presidential election.
Those documents — and records recently seized by the F.B.I. from the president’s personal lawyer Michael Cohen — might answer a question raised by the president’s critics: Have certain real estate investors used Trump-branded properties to launder the proceeds of criminal activity around the world?

Right up front they posit an ulterior motive for the prosecution, and a willingness to circulate rumors of criminality much like they circulated rumors of Russian collusion.
They continue to put forth their suspicions, while admitting they have no hard evidence (emphasis added):

Show me the man and I'll find you the crime.  Deep staters and newsfolk in general hate business men. They think it's unfair for them to make as much money as they can, while they're stuck with salaries. Ann Althouse has Great dialogue on ABC's "This Week" this morning on the subject, "Will Michael Cohen flip?"

Dersh, being the last honest liberal. If the video doesn't play, read the transcript.

The 'deep state' is real. But are its leaks against Trump justified? Yes, and no.


But while Hoover did many awful things in quiet, neither during his reign nor at any other time in American history have we seen such a profusion of sensitive leaks from the deep state with such an overtly political aim to bring down senior leadership.
. . .
The Flynn and related leaks didn’t just violate the law – they violated a core commitment the intelligence community made in after the era of Hoover not to politicize, or appear to politicize, the use of surveillance tools or the fruits of their use.

Conspiracy or No Conspiracy, That is the Question Debated by diGenova and Dershowitz….

…in 2016, were all just accidentally working in exactly the same direction; on exactly the same processes and political approaches with intelligence use by government institutions; in accidental alignment,… or, perhaps, it was all coordinated.
diGenova says ‘coordinated’. Dershowitz says ‘accidental’.


NO, NO YOU’RE NOT. A reader emails: “Am I the only person who would like to know if any secret FISA warrants were issued in order to surveil any members of the Romney campaign?”


What’s actually been “normalized” since November 2016:

— Political denial of the legitimacy of elections

Curious to see how all this works after the next change of party control.
— Adrian Vermeule (@avermeule) April 21, 2018


Obviously there was a counterintelligence operation against the Trump campaign, and by extension presidential candidate Donald Trump. However, as noted in the Susan Rice email describing the content of the January 5th, 2017, White House meeting – the intent of the outgoing administration was to keep president-elect Trump under investigation, yet not allow him to know he was under investigation.  Hence the briefing on only the most “salacious and unverified content of the dossier”.