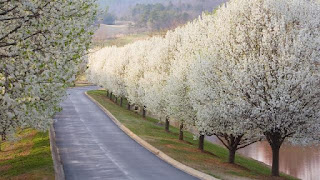 The Curse of the Bradford Pear

If it’s blooming white right now, it’s a curse. This dictum especially applies to that “charming” Bradford pear your dimwitted landscaper planted in the middle of your front yard. Indeed, lack of smarts is what has led to this disaster. Bradford pear is worse than kudzu, and the ill-conceived progeny of Bradford pear will be cursing our environment for decades or possibly centuries yet to come.

When Bradford pear was introduced as an ornamental in 1964 by the US Department of Agriculture, it was known then that this tree possessed the weakest branch structure in nature. Also, the tree was assumed to be sterile. Bradford pears will seldom last more than 20 years before they bust themselves apart at the seams. That’s actually the good news. 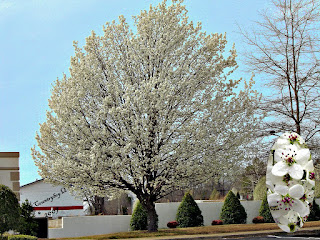 In an attempt to extend the lifespan of this despicable tree, other varieties such as Cleveland Select, etc. were introduced. These trees will live for about 25 years. That’s little consolation for the resulting disasters that happened when these other pear varieties were introduced.

After 25 years the ill effects of the steep v crotch branch structure – which all pears possess - take their inevitable course of action and cause pear limb structures to crack, split and bust. You can’t fool Mother Nature, and people who plant pears will sooner or later regret that choice. Planting pears borders on - if not crosses the line – of negligence.

However, the fact that Bradford pear trees are short lived and dangerous is not the real reason that these trees are such a disaster. The problem is that these trees are in fact not sterile. No two Bradford pears will ever reproduce among themselves, but they do cross pollinate with every other pear tree out there, including the Cleveland Select pear trees that were meant to be the salvation of flowering pears everywhere. The introduction of other pear varieties has compounded the problem to the point where it is almost too late to rectify. 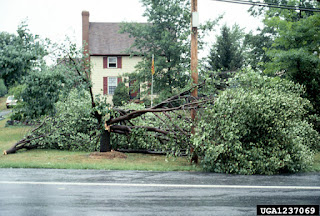 Because of the cross pollination problem, pear trees have now proliferated exponentially across our environment. And, to make matters worse, the evil offspring has reverted to the ancient Chinese Callery pears which form impenetrable thorny thickets that choke out the life out of pines, dogwoods, maples, redbuds, oaks, hickories, etc.
. . .
If you want to save the world, cut down your Bradford pear trees. I could not be more serious about this.

The wilds of Maryland are currently full of white flowering pear trees. We don't have any ourselves, fortunately, but our Tulip Poplars and oak self destruct at a decent clip.
Posted by Fritz at 6:59 PM