Plastic straws: Fighting pollution one sip at a time, Campaigns target the commonplace use of plastic straws

Plastic straws came to the public’s attention in 2015 when a video of sea turtle with a straw stuck in its nose went viral. The video provided a clear sense of the impacts that discarded straws can have on wildlife. But how do straws compare with other types of plastic pollution?

The impact may be bigger than you think. The Ocean Conservancy’s 2017 report ranks plastic straws in the top ten most common items found at beach cleanups. In the United States, we use 500 million straws each day—that’s 1.6 straws per person. Since straws aren’t recyclable, they end up in landfills, but many find their way into our waters.

Someone else is using my share, since I rarely use a straw. Plastic tampon covers are pretty high on the list too, why aren't you going after them?


Straws are also targeted because in most cases, they simply aren’t necessary. Many people are just as happy to drink from a glass, but straws are given out automatically in many restaurants. Across the country, local campaigns are telling people “Don’t suck, sip responsibly,” in an effort to get people to order their drink without a straw. They are also asking restaurants to provide straws only when asked.

While many people can simply avoid using straws, they can be a necessity in hospitals, for young children or for people with disabilities or injuries. Companies are addressing this need by creating straws out of a variety of different materials.

One popular alternative is the compostable straw. Made from corn starch or cellulose, they closely resemble the classic plastic version. However, they still aren’t recyclable and are not designed to decompose in water. If they aren’t properly disposed of at an industrial compost facility, and get into our waterways, they’ll stay there for a long time. 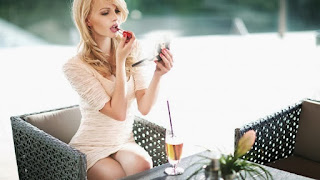 
Paper straws are another disposable alternative. Those who don’t enjoy paper disintegrating in their drinks will be happy to hear that newer versions hold up much longer, and they’ll still be able to decompose on land or dissolve in water within a month or two.

Those who don’t want a disposable straw can look into reusable ones made from materials like metal, bamboo, glass and silicone. There are even rubber molds to make straws out of ice—a cool idea for a summer day.

And what, last about one sip? Someone at EPA still has too much money.

Wombat-socho has "Rule 5 Sunday: Bikini Barrel Racing?" up and running at The Other McCain.
Posted by Fritz at 2:45 PM