Is There Any Justice in "Social Justice"? 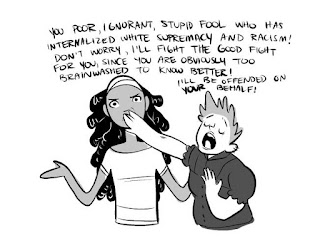 During the past five years — since President Obama was re-elected in 2012, basically — the rhetoric of progressive “social justice” ideology has made its way from elite universities into the cultural mainstream:


The term “social justice warrior” (SJW) was coined nearly 10 years ago by Will Shetterly. The son of civil-rights activists who were threatened by the Klan during his childhood, Shetterly became an award-winning science-fiction writer. It was in the context of his writing career that he encountered the indignant Internet mobs of virtue-signallers and identity-politics activists who inspired the epithet. By the time the #GamerGate controversy arose in August 2014, “SJW” was a popular label for this increasingly familiar type, and Shetterly’s coinage was made famous by Vox Day in the title of a 2015 book, SJWs Always Lie. 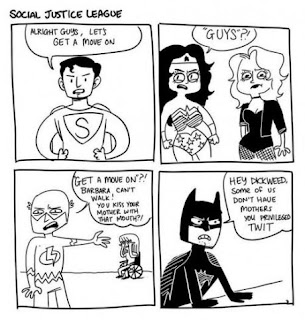 That the SJW mentality — a fixated obsession with victimhood — emerged from academia can be demonstrated by examining, e.g., Gender Studies curricula and the identity-politics rhetoric of student activism. “Intersectionality” (a jargon term coined by a law professor and proponent of “critical race theory”) became a mantra among campus feminists at elite universities who were taught that their “oppression” was part of an interlocking system of social injustice. No matter how rich her parents may be, or whatever social and economic advantages she may obtain, “intersectionality” means that the feminist student always considers herself as a victim of an unjust society, and thus obligated to destroy the system that oppresses her. . . .

Social justice: justice in terms of the distribution of wealth, opportunities, and privileges within a society. "individuality gives way to the struggle for social justice"
Pretty much any time "social" is used to modify a subject it debases it, either weakening or even contradicting it. Try it. Justice or "social justice", studies or "social studies", security or "social security", responsibility or "social responsibility", media or "social media". OK, the last one doesn't hurt it too bad. There wasn't very far to fall with media.
Posted by Fritz at 2:55 PM