Have some Refreshing Russiagate?

Well, the results of the House investigation into Russiagate is official, and it's pretty much what we expected. The AP reports GOP-led House panel clears Trump campaign in Russia probe, and points out that the Democratic side is not happy, and wanted to call scads more witness, and drag out the whole affair through the midterms, if not Trump's whole term in office.

“While the committee found no evidence that the Trump campaign colluded, coordinated, or conspired with the Russian government, the investigation did find poor judgment and ill-considered actions by the Trump and Clinton campaigns,” the House intelligence committee wrote.
. . .
“Committee Republicans chose not to seriously investigate — or even see, when in plain sight — evidence of collusion between the Trump campaign and Russia,” Rep. Adam Schiff of California, the top Democrat on the committee, said in a statement. Schiff cited several “secret meetings and communication” between people linked to Russia and Trump campaign officials, including Trump Jr. and former National Security Adviser Michael Flynn.

Althouse:  "Republicans on the House Intelligence Committee found no evidence during a monthslong investigation that the Trump campaign aided Russia’s election meddling..."


Whoa! That's not "strikingly divergent"! That's strikingly on the same page: No evidence of collusion. Yes, there is a difference of attitude, but it's so predictable, and so solidly based on our deeply rooted 2-party system that it sings a song of eternal American harmony.

About the only thing interesting to fall out of the report was this nugget: James Clapper Discussed Dossier With CNN, According To House Intel Report


The report, published by the GOP side of the House Permanent Select Committee on Intelligence, shows that Clapper acknowledged speaking with Tapper about the dossier while he was still serving as director of national intelligence.

That is in direct conflict with Clapper’s claim to CNN’s Don Lemon in March that he did not interact with the media prior to leaving the Obama administration on Jan. 20, 2017.

“I didn’t have any contact with media until after I left the government on the 20th of January, so I don’t quite understand, at least what I’ve read, that somehow I leaked about the dossier,” Clapper told Lemon in the interview.

“So you didn’t leak anything about the dossier to any media?” Lemon asked.

“No, not — I mean, I talked about it after I left the government, but not during that period, and certainly not between the 6th of January and the 10th when the president-elect himself talked about it.”


Buried within a newly declassified congressional report on Russian meddling in the 2016 U.S. elections is a shocking revelation: former Director of National Intelligence (DNI) James Clapper not only leaked information about the infamous Steele dossier and high-level government briefings about it to CNN, he also may have lied to Congress about the matter.

How soon does the clock tick down on the statute of limitations for lying to Congress this time?

He was then rewarded with a job from CNN. Hot Air: Clapper Leaked The Dossier To CNN After Ordering Comey To Brief Trump (Update: Clapper Hired By CNN)


So to put this back in chronological order:
It’s hard to look at that sequence of events and not conclude the briefing itself was a setup. If Clapper had ordered the briefing, knowing CNN was hot to publish a story, and then never leaked anything about it, that would be one thing. But the record shows he leaked the information to Jake Tapper (whose name is on the CNN story) within days after the briefing he had ordered supposedly to protect the president from CNN (and others).

Ace: So, Will Jake Tapper's Top Stories Be About Veterans Today?


I think he'll have all kinds of topics to cover besides the revelation that CNN employee James Clapper leaked a highly classified briefing to CNN, and then CNN published a #FakeNews story dutifully relaying Clapper's dishonest denial of having done so
...
I've noted that before, too: CNN knew damn well that Clapper was leaking to them, yet CNN ran Clapper's false claim he wasn't leaking to anyone and ran it as if the fact were true -- or, at least, they did not contradict it. 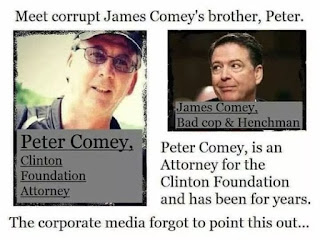 
Comey is acting as if something everyone has known about for the last six months is still confusing to him, possibly, so he can say it didn’t matter. His ignorance on this point seems a bit too studied given that everyone else has known who funded the dossier for six months. Is it a coincidence that this gets to the core of the complaints many Republicans have about the FISA memo, i.e. that it failed to clearly identify Trump’s opponent as the funder but merely indicated in a footnote that it might be oppo-research? It seems to me Comey is trying a bit too hard to say this didn’t matter.

Comey Double Down: I Didn’t Leak — I Just Instructed My Friend To Talk To The NYT A sort of Clintonesque interpretation of what a leak is.


Let’s just ask this question. If it was okay for Comey to have that material released to the media, why didn’t he do it himself? Comey likes to opine on ethics and integrity, but that cuts to the heart of the conceit. Having someone else give information to the media that you acquired through your position as a government official is a leak, and that makes Comey a leaker even if he doesn’t get prosecuted or sanctioned for it. It’s such a basic point that it beggars belief that Comey thinks it can be rationalized at all. 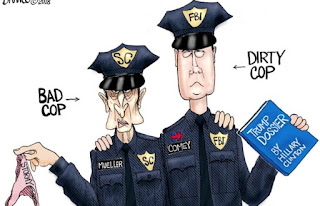 
The more we learn about how these massive investigations were started, the more they look so corrupted that this entire investigation now could now qualify as the fruits of a poisonous tree, a doctrine first adopted by Supreme Court Justice Felix Frankfurter as the only way to prevent government agents from abusing the rights of citizens and benefitting from those actions. The government can’t violate people’s rights with impunity and then just say “oops.”


Pardon Martha Stewart to troll Comey -- and also, because it's the right thing to do.

But mostly for the trolling.

Here's MKH's top two reasons for a pardon (though she lists more):

Via Wombat-socho's "In The Mailbox: 04.26.18" American Thinker: Sean Hannity Owns $90 Million In Real Estate. So What?. Yep. Rich people own thing, and it's not a federal crime. Also: Trump lawyer loaned to taxi mogul in weed biz. Rich people also invest in other things, and it may not be a federal crime either. Funny leak though, right? Federal Judge Issues 90-Day Stay In Stormy Daniels Suit Against Michael Cohen. I don't think 90 days is enough to clean up her image. Judge Tosses Manafort Civil Suit Challenging Special Counsel. Well, it was worth a try.

Regarding that last one: Jeffrey Toobin thinks The D.N.C.’s Lawsuit Against Russia and the Trump Campaign Isn’t a Bad Idea "This is a season for total partisan warfare, and the courts are a battlefield, too, and that’s where the Democrats are now taking their place."

Natalia Veselnitskaya admits the obvious: Russian from Trump Tower meeting: 'I am a lawyer, and I am an informant', so just why did the Obama administration go to such lengths to get her admitted to the US?
Posted by Fritz at 10:05 AM