Russiagate: So, Did You Hear James Comey Has a Book to Sell?

I'll bet you did. Anyway, it's in the news. Being unkind to female dogs everywhere, Chris Wallace is Surprised At ‘How B****y’ Comey’s Book Is (Video at link)

Wallace opened by stating he “may be the only person in America who hasn’t” received a copy of the book — set to be released next week — before saying he is surprised at “how little new there is in the book.”

“We get a lot of opinions, very unpleasant opinions of the president by James Comey, but in terms of hard facts — you know people are talking about bombshells — there are none,” he continued. “Basically everything that he said, in terms of the facts of what the president did, he already has testified before a congressional committee.”

STEPHANOPOULOS: But did he have a right to know that?

COMEY: That it had been financed by his political opponents? I don't know the answer to that.

So, Comey took it on himself to hide that little fact from the sitting President, head of the executive branch. Seems like grounds for firing. James Comey Refused to Answer Most of Congress' Questions, But Answered All of ABCNews' Question to Promote His Quickie Cash-In Book Yep. A Higher Loyalty to His Own Bottom Line. Comey: The Pee Tape Could Be Real, You Know. James Comey’s Memoir: Trump Fixates On Proving Lewd Dossier Allegations False Yes, well, that's entirely understandable, especially if they were lies. Honestly, I don't care any more.    Comey “Often Wondered” Why Trump Refused To Issue Strong Criticism Of Russia, Comey: Unverified Classified Information Cast Doubt On AG Lynch’s Independence In Clinton Probe How perceptive. James Comey: John Kelly Called Trump ‘Dishonorable’ for Firing Me, so John Kelly called Comey a liar.


“It is entirely possible that, because I was making decisions in an environment where Hillary Clinton was sure to be the next president, my concern about making her an illegitimate president by concealing the restarted investigation bore greater weight than it would have if the election appeared closer or if Donald Trump were ahead in all polls.”

Like everyone else, he thought Hillary was going to win, and he was afraid not saying anything about her scandal would be a scandal. Everything about Hillary is a scandal.


Comey's decision to deviate from standard procedures is central to the Justice Department inspector general's investigation into the FBI's and DOJ's handling of the Clinton email case.

Comey said he thought the FBI should have taken the lead because following standard procedures was not an option. "...what will happen to us is the Department of Justice will screw around it for Lord knows how long, issue probably a one sentence declination, and then the world will catch on fire, and then the cry in the public will be where on the earth is the FBI, how could the FBI be part of some corrupt political bargain like this, there's no transparency whatsoever..."

He continued, "We knew it was going to suck in a huge way. I knew. Nothing's (sic) that's happened, by the way, the storm has been outside my expectations. I knew what was going to happen, but I also knew after a lot of reflection that we would do far more damage to our beloved institution if we did the normal thing."


No, the reason is there's absolutely nothing to learn from this book. The five so-called takeaways listed by The Hill are so much pointless bilge. That Comey doesn't like Trump -- in the book comparing him to a Mafia chieftain -- is about as revelatory as "the sky is blue." That Comey regrets his explanation of the Clinton email investigation is, as noted above, self-serving. That John Kelly threatened to quit over Comey's firing is meaningless gossip. (He didn't.) And that Obama "comforted" Comey after the election, saying he did a good job, is touching -- unless you're a Hillary supporter.

You know who this is: "James Comey is a proven LEAKER & LIAR. Virtually everyone in Washington thought he should be fired for the terrible job he did-until he was, in fact, fired." "Lyin' Comey" Website Debuts, Paid for by GOP; NeverTrump Spastics Freak Out,  Emo Comey Graphic T-Shirt

The other "new" news is that the IG report on Andy McCabe has been released: DOJ IG releases explosive report that led to firing of ex-FBI Deputy Director Andrew McCabe


Andrew McCabe, onetime acting FBI director, leaked a self-serving story to the press and later lied about it to his boss and federal investigators, prompting a stunning fall from grace that ended in his firing last month, says a bombshell report released Friday by the Justice Department's internal watchdog.

Inspector General Michael Horowitz, appointed by President Barack Obama, had been reviewing FBI and DOJ actions leading up to the 2016 presidential election.

The report, handed over to Congress on Friday and obtained by Fox News, looked at a leak to The Wall Street Journal about an FBI probe of the Clinton Foundation.

The report says that McCabe authorized the leak and then misled investigators about it, leaking in a way that did not fall under a "public interest" exception. 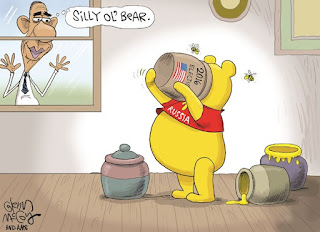 Ace: The OIG Report is About McCabe's Leaks Against Obama Officials and Hillary Clinton, Not About Trump.


An investigation was not opened into McCabe's leaks of damaging stuff about Trump.

No -- why would they do that? The Deep State doesn't like Trump. They approve of leaks against Trump.

This report is about McCabe's leaks against Obama officials.

The Clinton Foundation Borrowed $28.5 Million. Who Made It Disappear? Let me guess.


What is particularly surprising is that the FBI and Department of Justice (DOJ) were actively investigating the Clinton Foundation before, during and after Feb. 20, 2004. So how did investigators and prosecutors avoid finding obvious bank and wire frauds?

Mueller, Mueller, Mueller: Endgame: Mueller May Wrap Up Obstruction Probe Early As Chances Of Interview With Trump Fade,  Trump, Mueller teams prepare to move forward without presidential interview. No perjury trap. Talk to Mueller? No, Trump Should Use His Bully Pulpit to Expose Mueller's Corruption I like the way he thinks. In the NYT "Daily" podcast recently, the host Michael Barbaro said flatly that Trump does not have the power to fire Mueller...


... so it's interesting to see an op-ed in the Times today, "Of Course Trump Can Fire Mueller. He Shouldn’t." It's by lawprofs John Yoo and Saikrishna Prakash (and I'm not going to look at the comments to see what I assume is a lot of negativity toward Yoo).

Everyone benefits by protecting Mueller — even Trump. Color me unconvinced. Pompeo: No, I Won’t Resign As Secretary Of State If Trump Fires Mueller Whoopi Goldberg: Riots Over Mueller Firing ‘Would Be Fun to Watch’, Well it would be amusing to watch police tear gas the liberal horde.

Not surprisingly, therefore, firewalls and taint teams were developed in the context of the Fifth Amendment, not the Fourth or Sixth Amendments. Remember who comprises the firewall and taint teams: other FBI agents, prosecutors and government officials, who have no right under the Fourth and Sixth Amendments even to see private or confidential materials, regardless of whether it is ever used against a defendant.

The very fact that this material is seen or read by a government official constitutes a core violation. It would be the same if the government surreptitiously recorded a confession of a penitent to a priest, or a description of symptoms by a patient to a doctor, or a discussion between a husband and wife of their sex life.

The government simply has no right to this material, whether it ever uses it against the penitent, the patient, or the spouse in a criminal case.

Bannon pitches White House on plan to cripple Mueller probe and protect Trump, fire Rosie. Why Is Steve Bannon Suddenly Calling For Trump To Fire Rod Rosenstein? More Dersh: Trump Shouldn't Fire Rosenstein. Instead, He Should File a Motion to the DoJ Requiring Rosenstein to Recuse Himself I'm no constitutional scholar, but I think Rosie is too deep in this to be objective. Watergate Lawyer: Trump Is Going Full Nixon on Mueller 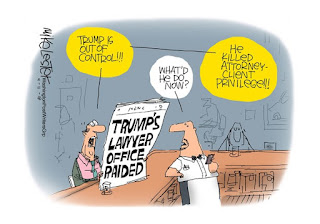 Trump’s allies worry that federal investigators may have seized recordings made by his attorney Okay, this could be amusing. Uh Oh: Daniels Lawyer Claims Michael Cohen Intends To Plead The Fifth In Defamation Suit


Think about this strategically. Right now Cohen is facing a criminal probe by the Manhattan U.S. Attorney *and* a civil suit filed by Daniels herself alleging that the hush-money contract is unenforceable and that Cohen defamed her by calling her a liar in her allegations of an affair with Trump. Michael Avenatti, Daniels’s lawyer, has naturally sought to compel discovery as part of that suit. He wants to know what Trump said to Cohen about Daniels, whether Cohen possesses evidence of their relationship, whether the president knew of the deal Cohen agreed to with Daniels in 2016, etc etc. If Cohen coughs that up, though, the material he produces could be used by the feds for their criminal campaign-finance case against him. So what he’s going to do, according to what his lawyer allegedly told Avenatti, is seek an emergency stay of the defamation suit until the criminal matter is resolved. And if that stay isn’t granted, then he’s going to “take Five” to prevent him from being compelled to turn over evidence.

Cohen To Judge: Give Us First Crack At All Materials From DoJ Raid Remember, Hillary got to decide what to turn over. Donald Trump Relied on Michael Cohen to Weather the Storm. Now The President Is On His Own. Part of the Mueller strategy, attack the enemies lawyer? Obama Holdover Accused of Corruption Approved Trump Lawyer Raid

More on the DoJ Coughs Up FBI Memo To House Intel Chair After Impeachment Threat front.


What did they find? Enough to get a thank you from Nunes at the end of the meeting. The DoJ provided access to 1,000 more pages of classified material that had been withheld until now, which may leave more questions than answers.

CNN: White House is prepping an effort to undermine Rosenstein It could be true, but then again, it is CNN. Dems Prep a Plan if Rosenstein Is Fired "Step one: Don’t call for impeachment." Deputy AG Rod Rosenstein tells confidants he is prepared to be fired, 'Here I Stand' — Or There He Goes? Let's be honest, the DOJ and the FBI got pretty fucked up on his watch.

Trump Pardons Former Cheney Aide Scooter Libby, 'Treated Unfairly' by Special Counsel Good. Scooter was made the scapegoat in a Special Counsel investigation aimed at Dick Cheney, accused of leaking the identity of CIA desk jockey Valerie Plame, when in fact the guilty party was known to be Richard Armistead, on Colon Powell's staff. Libby was convicted of lying to the FBI over disagreements in testimony with the media. Trump just sent a warning shot over Mueller's bow over Flynn, Carter Page, and Cohen.

No link at link. A Russian troll factory pushed a fake Hillary Clinton sex tape on Reddit, Now where did I put that brain bleach?

Kakistocrat: Ex-CIA director tears into Trump: 'Your kakistocracy is collapsing'
Posted by Fritz at 7:19 PM