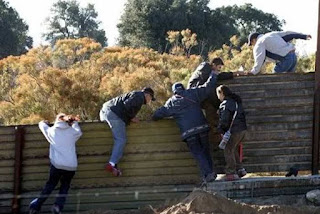 The Cost of Illegal Immigration

"At the federal, state, and local levels, taxpayers shell out approximately $134.9 billion to cover the costs incurred by the presence of more than 12.5 million illegal aliens, and about 4.2 million citizen children of illegal aliens." — Matt O'Brien and Spencer Raley.

It is also rather more than the single payment of $25 billion that it will cost to build a wall -- five and a half times more, and every year.

"Undocumented immigrants are at least 142% more likely to be convicted of a crime than other Arizonans. They also tend to commit more serious crimes..." — John R. Lott.

In 2015, included in the DEA's drug-threat assessment was the fact that drug overdoses killed more people in the United States than car accidents or guns. Many of these drugs [were] smuggled in large volumes by drug cartels." . . .


During a Customs and Border Protection roundtable in Sterling, Va., Department of Homeland Security Secretary Kirstjen Nielsen said Friday that about 70 terrorists try to get into the United States each day through some mode of transportation.

“As you heard on the watch floor, we have about 70 terrorists a day that we see trying to get here through some method of transportation. That's 500 a week, 2,000 a year. So needless to say, these men and women are very busy every day watching, not just cargo, but passengers and other sorts of traffic,” Nielsen said.

I do wonder how they count them; people on the terrorist watch list?


He is the world’s most persistent illegal immigrant: One Mexican managed to get deported 44 times in 15 years — which means he also managed to sneak back across the border at least that many times.

He may be the most persistent, but he is obviously not one of Mexico's brightest citizens.

“The defendant in this case allegedly re-entered the country illegally for the second time before he put the public safety of Indianapolis at risk and took the lives of two innocent men early Sunday morning,” Minkler said in a news release. “In April, Attorney General Sessions directed all federal prosecutor to prioritize charging aliens that illegally re-enter the country, especially if they are a risk to public safety or there is a criminal history present. Following the rule of law is the foundation of our American democracy, and my office is committed to fulfilling the Attorney General’s directive.”

Linked at Pirate's Cove in the weekly "Sorta Blogless Sunday Pinup" and links.
Posted by Fritz at 12:56 PM