Memo's, we got memos! Adam Schiff's memo, Jim Comey's memos, Susan Rice's memo. Seems like all these government types do is write memos. Adam Schiff isn't even interested in getting his memo out, he's interested in trying to embarrass Donald Trump and Devin Nunes: Adam Schiff: No revisions will be made to Democratic memo

Rep. Adam Schiff, D-Calif., said Tuesday no revisions would be made to the Democratic rebuttal to the memo drafted by House Intelligence Committee Chairman Devin Nunes, R-Calif., and his Republican colleagues and staffers alleging surveillance abuses committed against the Trump campaign.

“We’re not going to make any revisions to it. The only question is what redactions will be made. And obviously we’d like to keep those to a minimum,” Schiff told reporters on Capitol Hill Tuesday.

“The White House has a different interest. I think their interest is in redacting anything that doesn’t reflect well on the White House,” the top Democrat on the House intel panel added.

Release the whole memo. If it reveals sources and methods, that's on Schiff and the democrats.

As opposed to Adam Schiff, who is merely a useless idiot, Carter Page, Useful Idiot


Reading some of the recent hyperventilating headlines (“Carter Page admits to advising the Kremlin”), one could be forgiven for wondering whether Page’s years in Moscow were spent working from an office adjoining Putin’s. The reality is disappointingly pedestrian. What Page actually wrote in a 2013 letter is that, “over the past half year, I have had the privilege to serve as an informal advisor to the staff of the Kremlin in preparation for their Presidency of the G-20 Summit next month, where energy issues will be a prominent point on the agenda.”

Color me underwhelmed. So, it evidently was not Page, after all, who first suggested that Putin use the Ukrainian domestic crisis as a pretext for seizing the Crimea, or who counseled the Russian government to expel USAID, declare NGOs to be foreign agents, or murder Nemtsov and Magnitsky. Rather, he offered his thoughts (quite possibly unsolicited) on energy matters to working-level Kremlin staffers preparing to host a routine G-20 summit in St. Petersburg. Did any of his ideas have any impact on the summit deliberations? Did the summit lead to any noteworthy energy-related developments? For that matter, can anyone recall anyresults of any consequence whatsoever from the 2013 St. Petersburg G-20 summit? No, no, and no. Nevertheless, Page’s banal indulgence in a little résumé-padding is being magnified into sedition and used to justify the FBI’s interest in Page. Quite apart from the inherent flimsiness of the pretext, it’s not clear from the accounts I’ve seen whether this letter, which has only recently been publicized, was even known to the FBI when it sought the FISA warrant.

Equally disturbing is Stephanopoulos’ mendacious assertion that Page was “recruited by a Russian agent.” Of course Page was not “recruited.” He was only vetted for a possible recruitment attempt—and found to be not worth the effort. But such vetting is standard operating procedure for the Russian intelligence services, who have doubtless conducted a similar vetting of virtually every American diplomat, journalist, and businessman who has spent any time in Russia, or dealing with Russia.

Ace ruminates on the Rice memo: Why Did Susan Rice Write Her Transparently Self-Serving Secret Memo to Self?


I assumed she wrote it to cover Barack Obama's ass -- but John Hindraker of Power Line says no, she wrote it to protect herself, and throw Obama under the bus, if the need arose.
And maybe that need is a-risin'.
. . .
In other words, should it come out that this meeting was a conspiracy to subvert the duly-elected constitutionally-invested president, Susan Rice could break out her memo and say "Obama ordered it."

This makes sense -- Hindraker notes that if all this was was the "company-line" "boilerplate," she wouldn't have had to have made this a secret memo to self -- she could have just made it a routine memo and added it to the file for all to see.

No, she put this memo in a glass box with stenciled writing: IN CASE OF CONGRESSIONAL INVESTIGATION, OPEN BOX AND TAKE SECRET EMAIL MEMO TO SELF AND SAY YOU VERE JUST ACTUNG UNDER ZE ORDERS.

And a reminder: Susan Rice Email Suggests Comey 'Seriously Misled' Senate Regarding Meeting With Obama. Trump would have been derelict in his duty had he not fired Comey.

If Comey, FBI Didn’t Think Flynn Lied, Then Why Did He Plead Guilty? My guess is that Flynn didn't have enough money to fight, and Mueller was threatening to indict his son.


So why on earth did Flynn plead guilty!? I pitched this to Professor Jacobson, who brought up Flynn’s son, and it looks like he’s not the only one. Andrew McCarthy at National Review also noticed the oddities in this case as well.

Last September, the media reported that Special Counsel Robert Mueller turned his eyes to Michael Flynn, Jr., due to “his role as chief of staff to his father at the Flynn Intel Group, a lobbying and consulting firm that worked for international and domestic clients.” From NBC News:


Several legal experts with knowledge of the investigation have told NBC News they believe Mueller, following a classic prosecutorial playbook, is seeking to compel key players, including Flynn and Manafort, to tell what they know about any possible Trump campaign collusion with Russia. Mueller has brought onto his team a federal prosecutor known for convincing subjects to turn on associates. Any potential criminal liability for Michael G. Flynn could put added pressure on his father, these legal experts said.
“Any time a family member is identified as a subject that does increase pressure,” said Peter White, a former federal prosecutor. “In the typical parent-child relationship the last thing any parent would want is for their child to get in trouble for something they initiated.”

Byron York: Why are the Comey memos secret? The question is rhetorical, of course. They're secret to protect Comey's and the FBI's reputation.


The memos are critically important. Portions of them have been leaked to the press, given to a Comey friend, discussed in congressional testimony, and read by a few Capitol Hill lawmakers and staff. Sometimes it seems the only people who have never had a chance to see the Comey memos are the millions of Americans who are trying to make sense of the daily firehose of Trump-Russia news.

They're not likely to see the memos anytime soon. The FBI and the office of Trump-Russia special counsel Robert Mueller have imposed tight restrictions on access to the memos, holding them even more closely than some documents that are classified at a far higher level. Now, with speculation about obstruction ever present in the media, some lawmakers are calling for the memos to be released. It's time for Americans to know what's going on, they say.


Yesterday, all the head spooks appeared before the Senate Intelligence Committee. It was a real alphabet soup -- participants included the CIA (Pompeo), FBI (Wray), NSA (Rogers), DNI (Coats), and others. As expected, one of the main themes of the spook testimony was RUSSIAN interference in our electoral process. Another theme of the testimony (from the Democrats) was that President Trump does not take RUSSIAN election interference seriously. The WaPo tells us, "Their [spooks] assessment stands in contrast to President Trump, who has repeatedly voiced skepticism of Russian meddling in the 2016 election." That's not from any witnesses, that's just the WaPo editorializing.

In order to talk about the 2016 election, it's important to remember two things: First, that no one thought President Trump would win the 2016 election, even the RUSSIANS. Second, RUSSIA'S purpose with the 2016 election was to cause chaos and undermine the presumed victrix, Hillary. Now it turns out that Hillary lost and Trump won, but they still want to destabilize the U.S. Who are the people furthering the RUSSIAN goals of chaos, division and undermining the president? The media, the left, and the crazy never-Trump people.

I watched most of this hearing and I did not see any of these agency heads testify that President Trump is not taking the RUSSIAN threat seriously or ordering them to ignore threats to our election processes. In fact, the WaPo reports, "Pompeo added that Trump 'has made very clear we have an obligation' to make sure policymakers have a deep understanding of the Russia threat." So all the claptrap about President Trump trying to stop the intel agencies from doing their job regarding the RUSSIA threat is just the left's propaganda to undermine the president.

Said DNI Coats:
“There should be no doubt that Russia perceives its past efforts” to disrupt the 2016 presidential campaign “as successful and views the 2018 midterm elections as a potential target for Russian influence operations,” said Coats, the leader of the U.S. government’s 17 intelligence agencies.
...
Coats said that Russia will continue using propaganda, false personas and social media to undermine the upcoming election.

Just who, again, was colluding with the Russians? Buzzfeed sues DNC for Russian files:


Now, trying to prove the truth of what they published after the fact, BuzzFeed asked the DNC for records that would help them in their defense. “No dice” said the DNC:


Now, BuzzFeed is taking the Democratic National Committee to court in an attempt to compel it to turn over information it believes will bolster its defense against Aleksej Gubarev, a Russian business magnate who says he was libeled in the dossier when it tied him to the Russians’ alleged hacking of the D.N.C.’s e-mail servers. In a nutshell: BuzzFeed believes the D.N.C. has information that could show a link between Gubarev and the e-mail hacking, which would undercut his libel claim.

The DNC says that “In legal papers, the D.N.C. has argued that disclosing the digital signatures, supposedly left by the Russia-directed hacking organizations known as Cozy Bear and Fancy Bear, would inevitably expose details of the D.N.C.’s information systems, possibly making them more vulnerable to another hack” according to Vanity Fair.

If the DNC hasn’t secured their IT systems at this point, I suppose they could use a server located in a bathroom closet in Chappaqua, NY that isn’t being used at the moment. What a clown show.

FBI Chief Schools Kamala Harris on Presidential Privileges - Wray affirmed Trump's constitutional authority to declassify info when radical California Dem asked if president should 'recuse himself' I expect her view of executive priveleges will change dramatically when, as she expects, she becomes president. 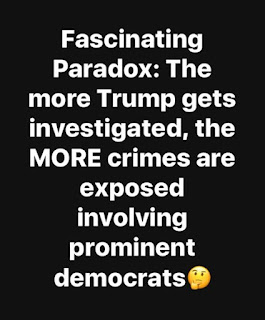 The Trump, Clinton Scandals Are Claiming A Lot Of Bodies — At FBI And Justice


Whenever anyone suggested that officials at the FBI and Justice Department might have had a political bias that severely tainted both the investigation into the Trump-Russia and Hillary Clinton email scandals, they were called conspiracy-mongers or worse.
But if the FBI and Justice are so squeaky clean of political bias, what accounts for the growing pile of top officials deeply involved in those supposedly aboveboard investigations who've been reassigned, demoted or have suddenly quit their jobs? There have been nearly half a dozen in just the past few weeks. Thankfully, reporter Sharyl Attkisson has been keeping a running tally.