Olympic Sore Loser of the Week

At medal ceremony after loss to USA, Canadian player immediately yanks silver off her neck

The disappointment showed on their faces and for Canadian defenseman Jocelyne Larocque there was no celebration in winning the silver medal.

After the United States won a thrilling shootout for its first Olympic gold in two decades, the medal ceremony took place. Larocque had the reaction that was most noteworthy — yanking off the silver immediately after it was placed around her neck.


It may not be that she hates the US. She may just hate losing. 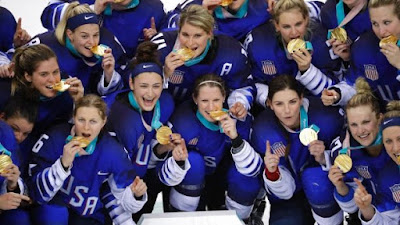 Linked at Pirate's Cove in "If All You See…" Wombat-socho has "Late Night With Rule 5 SundaySailor Moon Goes To The Olympics" open for business at The Other McCain.