When last seen, our loving couple was hating on Trump, and looking for ways to communicate without leaving a digital trail. Well, other than talking in bed, which is way too old fashioned, not mention limiting, considering their over 50,000 text messages. Today's peek into their love life shows that Obama probably knew what was happening: FBI lovers' latest text messages: Obama 'wants to know everything' 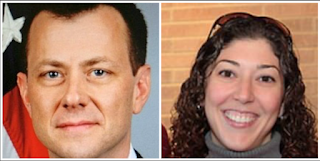 Newly revealed text messages between FBI paramours Peter Strzok and Lisa Page include an exchange about preparing talking points for then-FBI Director James Comey to give to President Obama, who wanted “to know everything we’re doing."

The message, from Page to Strzok, was among thousands of texts between the lovers reviewed by Fox News. The pair both worked at one point for Special Counsel Robert Mueller's probe of alleged collusion between the Trump campaign and Russia.

Page wrote to Strzok on Sept. 2, 2016, about prepping Comey because "potus wants to know everything we're doing." According to a newly released Senate report, this text raises questions about Obama's personal involvement in the Clinton email investigation.

And another glimpse into their hatred of the "deplorables":

That text came from Strzok to Page on Nov. 4, 2015, the day after Jill McCabe lost a hotly contested Virginia state Senate election. Strzok said of the result, "Disappointing, but look at the district map. Loudon is being gentrified, but it's still largely ignorant hillbillys. Good for her for running, but curious if she's energized or never again."

If you can't spell it, you may be one. And speaking of McCabe, Weiner's filthy laptop get aired as well:


On Sept. 28, 2016, Strzok wrote to Page, "Got called up to Andy's [McCabe] earlier.. hundreds of thousands of emails turned over by Weiner's atty to sdny [Southern District of New York], includes a ton of material from spouse [Huma Abedin]. Sending team up tomorrow to review... this will never end." According to the Senate report, this text message raises questions about when FBI officials learned of emails relevant to the Hillary Clinton email investigation on the laptop belonging to Weiner, the husband to Clinton aide Huma Abedin.

It was a full month later, on Oct. 28, 2016, when Comey informed Congress that, "Due to recent developments," the FBI was re-opening its Clinton email investigation.

And alas, we may get a hint at the end of their partnership:

It's unclear whether she was mad at her friend, or if she suddenly became aware that they, and their thousands of texts, had been discovered.

I suspect someone tipped her off to the fact that Inspector General Horowitz was looking at their messages. According to CBS, she left the Meuller investigation before the texts were "discovered," but I have my doubts. She probably figured her career was over. It should be.
Posted by Fritz at 11:28 AM