Too much to deal with properly and too much to ignore: 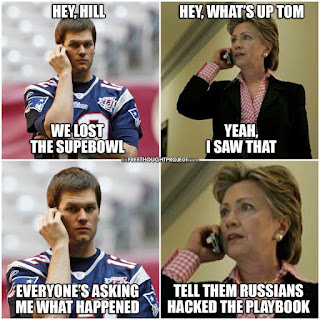 The top Democrat on the Senate Intelligence Committee communicated through phone calls and text messages last spring with a lobbyist for a Russian oligarch in order to gain access to Christopher Steele, the former British spy who wrote the salacious and unverified anti-Trump dossier.

Senator Mark Warner (D-Va.) texted back and forth with lobbyist Adam Waldman, who runs the Endeavor Group -- which has ties to (surprise!) Hillary Clinton -- while leading the Senate Intelligence Committee's investigation into President Trump's alleged ties to Russia with his Republican colleague North Carolina Sen. Richard Burr.

In one text to the lobbyist, the senator expressed a desire to "not have a paper trail" of his messages. He suggested in another text that he did not want Burr or any other senator included in the discussions.

“In addition to working on the investigation into Clinton’s handling of classified information, Laufman has also worked on the investigation into Russian meddling in the 2016 presidential election. On the Clinton investigation, he sat in on interviews with the former secretary of state and several of her aides, including Cheryl Mills, Huma Abedin and Jake Sullivan. He was joined in those interviews by Peter Strzok, the FBI agent who is currently embroiled in a scandal over politically charged text messages.”

Amended/Supplemental/Revised list of DOJ/FBI Weasel Brigade aka "Get Trump" Squad:

Did The FBI Use National Security As An Excuse To Redact Embarrassing Info? - Yes, Next Question.

Ohhh: "Intelligence" That Trump Cavorted With Prostitutes In Russia, and That the FSB Had Kompromat on Him, Was First Claimed in Cody Shearer's Memo, Before Migrating to the "Steele Dossier" Golden Showers story tracked to Hillary's Hit Men?


I've earlier speculated that, given that Hillary's disreputable-to-the-point-of-absurdity "researchers" Sidney Blumethal and Cody Shearer were actually the major ghostwriters of what we call the "Steele Dossier," and that Christopher Steele was brought on mainly as a Front Man, a "cleanskin," whose name slapped upon the Blumenthal/Shearer joint production would lend it a veneer of credibility that the names Blumenthal and Shearer would not.

This is just a speculation. I don't have any facts that establish it, only that suggest it as a possibility. Such as the now-admitted fact that Shearer and Blumenthal continued feeding Steele their own "intelligence" (I can't put enough sneer-quotes around that word in this context) and that Sidney Blumenthal was, for reasons not yet explained, interviewed in connection with the "Steele" Dossier.

Almost as if he knew something about it.

Well, now there's a new bit of data: Cody Shearer is the guy who obtained, supposedly, "intelligence" from an unknown foreign (RUSSIAN) source about Trump supposedly staging a Urinary Olympics with prostitutes,kompromat material claimed to be in the hands of the KGB successor organization the FSB, and then passed this splashy, stinky tip to Christopher Steele.

Oh, by the way: Christopher Steele only began work on "his" dossier in June 2016. But in August 2016, Shearer was already peddling this outlandish bit of dezinformazioniya to the press.

Which suggests that maybe Shearer was already working on this smear campaign before Steele was hired. . .


The FBI didn’t notice that some emails from Hillary Clinton’s private email server were marked classified with a “(C)” when they were sent — something that seemingly would have been one of the first and most obvious checks in an investigation, and one that FBI agents instantly recognized put the facts at odds with Clinton’s public statements.

The Intelligence Community Inspector General spotted it after the FBI missed it, texts between FBI agent Peter Strzok and his mistress, FBI lawyer Lisa Page, reveal. “Holy cow,” Strzok wrote, “if the FBI missed this, what else was missed?”

“Remind me to tell you to flag for Andy [redacted] emails we (actually ICIG) found that have portion marks (C) on a couple of paras. DoJ was Very Concerned about this,” he wrote.

“Found on the 30k [emails] provided to State originally. No one noticed. It cuts against ‘I never sent or received anything marked classified,'” he wrote, referring to statements by Clinton downplaying the danger of her email practices.

And how did that happen?


Clinton decided to print out 55,000 pages instead of providing the State Department with her emails in their digital format, a technique sometimes used by lawyers to make searches harder for their opponents. A CTRL-F search for “(C)” could have missed the markings because State had to re-digitize the forms with Optical Character Recognition, which can get tripped up on symbols, perhaps interpreting it as something like “[C]” or a copyright symbol. Nonetheless, the classified marker always appears at the beginning of a paragraph and is visually distinct.

A step Hillary took to actively obstruct the ability of the DOJ to search her emails.


When asked at the March 2017 briefing why the FBI relied on the dossier in the FISA applications absent meaningful corroboration–and in light of the highly political motives surrounding its creation–then-Director Comey stated that the FBI included the dossier allegations about Carter Page in the FISA applications because Mr. Steele himself was considered reliable due to his past work with the Bureau.


Indeed, the documents we have reviewed show that the FBI took important investigative steps largely based on Mr. Steele’s information–and relying heavily on his credibility. Specifically, on October 21, 2016, the FBI filed its first warrant application under FISA for Carter Page. [REDACTED] The bulk of the application consists of allegations against Page that were disclosed to the FBI by Mr. Steele and are also outlined in the Steele dossier.


The application appears to contain no additional information corroborating the dossier allegations against Mr. Page, although it does cite to a news article that appears to be sourced to Mr. Steele’s dossier as well.

Political Basis Mentioned Only ‘To A Vaguely Limited Extent’


[T]he FBI noted to a vaguely limited extent the political origins of the dossier. In footnote 8 the FBI stated that the dossier information was compiled pursuant to the direction of a law firm who had hired an “identified U.S. person”–now known as Glenn Simpson of Fusion GPS–[REDACTED] The application failed to disclose that the identities of Mr. Simpson’s ultimate clients were the Clinton campaign and the DNC.

And much much more. And another: How The Media Buried Two Huge FBI Stories Yesterday


Grassley and Graham had to fight the FBI tooth and nail to get this memo released with few-enough redactions to serve the public. Grassley accused the bureau of playing a “bureaucratic game of hide the ball.” In short, there were multiple interesting angles worthy of serious — perhaps even breathless — coverage.

Yet Major Outlets Don’t Want to Talk About This

Instead, The New York Times ran a story on page 19 of the newspaper. Its portions about the criminal referral — as opposed to its portions repeating Democratic talking points — could not have been more dryly written or uninteresting. Reporters Maggie Haberman, Sharon LaFraniere, and Michael Shear devoted a total of five sentences in a 22-paragraph story to the Grassley and Graham expose. It ran under the false headline “2 Senators Issue Letter To Support House Memo,” even though the letter was issued in early January, weeks before the House memo was made public. The criminal referral was only this week published with few-enough redactions to make sense of it.

What about at the Washington Post? Their reporters did not write a story about the significantly less redacted letter released Tuesday. A blog post mischaracterized the more redacted version of the letter Monday as a letter written “in an effort to breathe life into the deflating Nunes effort. Unsurprisingly, it’s another big nothing.” It’s not nothing, as coverage of the less redacted letter shows. It confirms the dramatic claims in the House memo, which are anything but deflated. And it was written weeks prior to the House Intel memo. But other than that, great job downplaying.

Certainly Politico covered the dramatically more transparent letter released Tuesday, right? Wrong. I mean, it’s not a scandal if you don’t look at it! . . .

Nothing to see here, folks.
Posted by Fritz at 8:49 AM