So Much for Sea Level Rise

Venice without water: Gondolas helplessly abandoned on dried-up canals after water levels are the lowest since records began – and it has not stopped sinking


Look at that… It’s eerie! Exceptionally low tides have drained the lagoon of Venice, leaving Venetian gondolas stranded on dried-up canal banks. Yes, look at these famed Venetian gondolas helplessly abandoned on the docks, as the low tides caused by Wednesday’s ‘super blue blood moon’ dried up the canals, robbing gondoliers of their money and residents of their transportation. 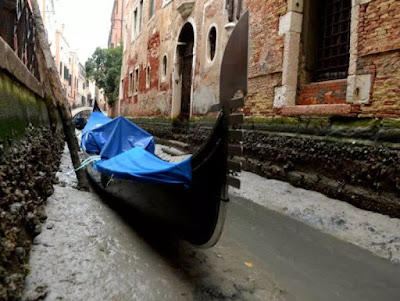 This is the third year that Venice has experienced record low water levels, with data showing a decrease of up to 60 cm lower than average. Two years ago, the city reported water levels up to 70 cm below normal levels, the lowest ever recorded in city data.

We've seen quite a bit of crying about how the treasures of Venice are being doomed by sea level rise, and terrible high tides which threaten St. Marks Cathedral. Any system subject to storm tides is likely vulnerable to what I like to call "blow out" low tides, caused when winds move water away from the site. We see a lot of wind driven tides here, both high and low.

Wow, about 15 cm in 94 years! Call it 1.5 mm per year, roughly the rate of global sea level rise, and no hint of recent acceleration.

If you can't figure out how to stay ahead of 1.5 mm/year of sea level you have serious deficiencies in your imagination.