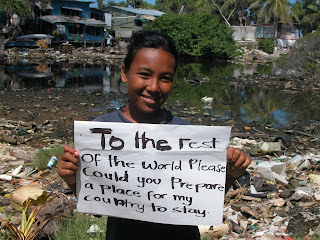 Remember when the islands of Tuvalu were going to be inundated by sea level rise? Never mind…

From the “we told you so, again, and again” department. We’ve had several articles about the island of Tuvalu and the ridiculous claims of sea level rise causing it to disappear, while at the same time they are building new hotels and airports to attract tourists. Willis has also had several articles on how Pacific atolls grow, and float, rather than sink as sea level advances. 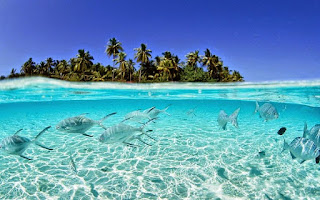 Now, a study confirms what we’ve already known – atolls, and in particular Tuvalu is growing, and increasing land area. So much for climate alarmism. From Nature communications:Patterns of island change and persistence offer alternate adaptation pathways for atoll nations . . .


Sea-level rise and climatic change threaten the existence of atoll nations. Inundation and erosion are expected to render islands uninhabitable over the next century, forcing human migration. Here we present analysis of shoreline change in all 101 islands in the Pacific atoll nation of Tuvalu. Using remotely sensed data, change is analysed over the past four decades, a period when local sea level has risen at twice the global average (~3.90 ± 0.4 mm.yr−1). Results highlight a net increase in land area in Tuvalu of 73.5 ha (2.9%), despite sea-level rise, and land area increase in eight of nine atolls.Island change has lacked uniformity with 74% increasing and 27% decreasing in size. Results challenge perceptions of island loss, showing islands are dynamic features that will persist as sites for habitation over the next century, presenting alternate opportunities for adaptation that embrace the heterogeneity of island types and their dynamics.


From the discussion section:


Here we present the first comprehensive national-scale analysis of the transformation in physical land resources of the Pacific atoll nation Tuvalu, situated in the central western Pacific . Comprising 9 atolls and 101 individual reef islands, the nation is home to 10,600 people, 50% of whom are located on the urban island of Fogafale, in Funafuti atoll. We specifically examine spatial differences in island behaviour, of all 101 islands in Tuvalu, over the past four decades (1971–2014), a period in which local sea level has risen at twice the global average . . .  Surprisingly, we show that all islands have changed and that the dominant mode of change has been island expansion, which has increased the land area of the nation.Results are used to project future landform availability and consider opportunities for a vastly more nuanced and creative set of adaptation pathways for atoll nations. 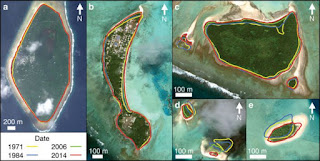 We generally agree that sea level is rising world wide at a pace of 1-3 mm a year, about the thickness of a nickel. How do low lying coral islands escape the fate of being drowned?  Well, the "mountain" that formed the base of the atoll could be rising tectonically, but this is unlikely as most of them are dead or long dormant volcanoes. But the coral that surrounds them grows upwards toward the light at a rate that easily matches the rate of sea level rise. That doesn't do people a whole lot of good since they won't grow out of the water. However, the coral is chewed on by various animals for food (mostly parrot fish), creating sand, which can be washed up on the beach, which is then blown by wind up into sand dunes where vegetation can grown on it. On a coral atoll, that's about all the elevation you get. It was Charles Darwin who understood all this first, back in 1842.
Posted by Fritz at 7:11 PM