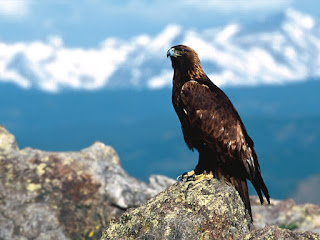 Eagle provides a ‘golden’ moment to crown a day of birding

We had just finished a wonderful three hours enjoying the avian bounty of the Blackwater National Wildlife Refuge, just south of Cambridge, MD. Our animated discussion about winter waterfowl was slammed to a halt as a huge raptor flew right in front of us and disappeared into the trees bordering Key Wallace Drive.

The bird was only in view for a few seconds, but the identification was unmistakable. Huge, powerful, dark brown and wearing an elegant golden scarf — it was a golden eagle (Aquila chrysaetos), and we were momentarily speechless.

Worldwide, there are only about 300,000 golden eagles. About 35 percent of them spend some portion of their lives in the United States. Seeing golden eagles outside their breeding range is a rare sight. The big bird’s bulk and beauty made the sighting as exceptional as it was uncommon.

Roughly the same size as the familiar bald eagle, goldens are impressively large with wing spans of 7 feet. As is common with raptors, females are bigger than males. A female golden eagle can weigh more than 11 pounds, while males average a bit less than eight. The golden eagle is almost completely covered in dark brown feathers, all the way down to its toes. Golden feathers cover the nape and crown. The late afternoon sunlight was perfect for viewing those eponymous feathers.
. . .
Golden eagles feed primarily on small mammals. On the breeding grounds, this means hares, rabbits and prairie dogs. Occasionally, these massive birds attack and kill much larger game such as deer and bighorn sheep. They also eat carrion and will steal food from other birds, such as fish from osprey.

In the Chesapeake region, golden eagles rely on waterfowl as their main dietary source, taking geese, swans and great blue herons, along with rabbits, squirrels and the like.

To the best of my knowledge I've never seen a Golden Eagle. I'd sure like to.
Posted by Fritz at 7:18 PM