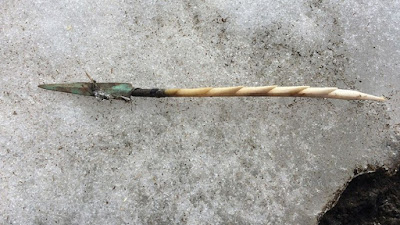 The arrowhead, which is at the tip of a perfectly preserved antler arrow, was found sticking out of an ice patch in Canada’s Yukon Territory. The find, which was made in 2016 on an unnamed mountain, surprised experts.

“It was found near the top of a snow-capped mountain in South West Yukon,” Yukon Archaeologist Greg Hare told Fox News. “It was an incredible discovery, we really didn’t intend to be on that [ice] patch on that day."

Native Americans have long been known to have used native copper metal deposits, including in the Alaska and Yukon region, so that's really not the surprise.  But an artifact melting out of a 900 year old ice patch implies that, at least in that spot, the world was warmer than in has been recently in the distant past.
Posted by Fritz at 6:43 PM