Free the Nipple: The PyeongChang Demonstration 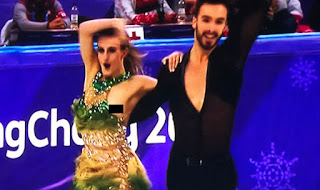 
French ice dancer Gabriella Papadakis was left devastated after an untimely wardrobe malfunction took the shine off her short program performance at the Winter Olympics.

Papadakis, who was in second place with 81.93 alongside Guillaume Cizeron at the halfway point, battled on after an embarrassing mishap that left her dress, which came with a haltertop, unfastened at the beginning of the routine and later appeared to reveal the lower part of her breast. 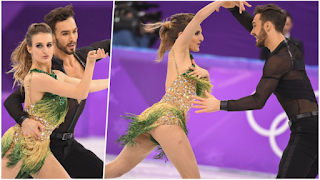 Next time, reinforce the costume with a safety pin.

The accident took place when Papadakis threw herself backward on the final element of the performance and her costume rode upwards in a revealing manner. The incident was shown live on international television and was later replayed on slow motion screens in the arena.

I saw the performance on "live" TV, and while I didn't see much, even with my freshly improved (but not yet corrected eyes, it was obvious her discomfort, and attempts to keep things together affected their performance, even though they still got pretty good scores. They had been pre-billed as co-contenders for the Gold medal, with Virtue/Moir. 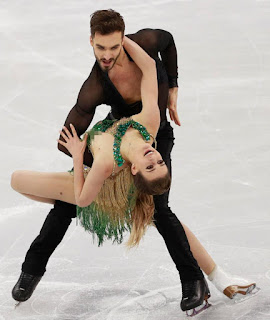 Papadakis had tears streaming down her face as she moved through the media interview zone, leaving her partner Cizeron to take most of the questions for her.

“It is just frustrating to miss a few points because of a costume issue,” Cizeron said. “It is not what we get ready for when we train. I am still proud that we managed to pull out a program like that even with a difficulty like this.

It wasn't that obvious, and it all happened at high speed, so it didn't seem too bad to me. In fact, I think it should be one of the required elements. Some uncensored photos (NSFW).

Last night, in the free skate competetion, they lost the gold to Virtue and Moir by less than 2 points, so it seems likely to me that the "wardrobe malfunction" cost them the medal.