The FBI and the Justice Department heavily relied on the Steele dossier’s uncorroborated allegations. You know this is true because, notwithstanding the claim that “only narrow use” was made “of information from Steele’s sources,” the Democrats end up acknowledging that “only narrow use” actually means significant use — as in, the dossier was the sine qua non of the warrant application. The memo concedes that the FISA-warrant application relied on allegations by Steele’s anonymous Russian hearsay sources . . .
[B]ecause Page was an American citizen, FISA law required that the FBI and the DOJ show not only that he was acting as an agent of a foreign power (Russia), but also that his “clandestine” activities on behalf of Russia were a likely violation of federal criminal law. (See FISA, Section 1801(b)(2)(A) through (E), Title 50, U.S. Code.) It is the Steele dossier that alleges Page was engaged in arguably criminal activity. The Democrats point to nothing else that does.


The Democrats’ mainstream media adjunct has of course seized on the release of the memo to regurgitate the obligatory talking points. Read properly, however, the Schiff memo undermines the Democrats’ case.

Also at Powerline, The Silence of Susan Rice:


By letter to Susan Rice dated February 8, 2018, Senators Grassley and Graham posed 12 numbered questions. I posted the Graham/Grassley letter in “Rice papers the file.” By letter dated February 23, 2018, white collar criminal defense lawyer Kathryn Ruemmler has now responded to the Grassley/Graham letter on Rice’s behalf. I posted Ruemmler’s letter nearby this morning in “Susan Rice responds, sort of,” and am embedding it again at the bottom.

Let’s take an inventory of Rice’s response to the questions: answered, partially answered, answered narrowly, or not answered. I have italicized my accounting below, subject to further thought and analysis:

Question 1. Did you send the email attached to this letter to yourself? Do you have any reason to dispute the timestamp of the email?
. . .
Susan Rice has lawyered up. For some reason or other, with respect to several pointed and important questions, she is resting on her right to remain silent.


It is interesting to compare the two memos, both as rhetorical artifacts and as substantive contributions to the debate over possible “Russian collusion” in the 2016 presidential election. Even a comparison of their physical appearance is revealing. Let’s start there.

The Republicans’ memo, overseen by Devin Nunes, chairman of the House Intelligence Committee, is a four-and-a-half-page précis of findings from an ongoing oversight investigation into the behavior of the FBI and Department of Justice during the 2016 election cycle. It is prefaced by a brief letter from presidential counsel Donald McGahn to Congressman Nunes laying out the rationale for declassifying the memo and releasing it to the public. Each page of the memo is marked “UNCLASSIFIED” and the legend “TOP SECRET NOFORN” (for “no foreign nationals”) on each page is struck through with a heavy black stroke. Otherwise it is clean.

The Democrats’ memo, overseen by ranking minority member Adam Schiff, spills on to a tenth page. It is probably only about a half again as long as the Republicans’ memo, however, because—in addition to bearing the “Unclassified” stamps and strike-throughs of the “top secret” advisories—its text is littered with redactions: many passages of the text are blotted out. Were those redactions required by the FBI? By the executive branch? It was not said. Nor was it said why the Democrats did not take the redactions on board and present a clean text. I do not know the answer. My suspicion is that they wanted the blocks of black to stand as mute, non-specific but nonetheless graphically incriminating witnesses to their allegations. . .

The battle of the Congressmen continues: Nunes: No, Schiff’s Memo Doesn’t Change Anything in My Memo. A point by point rebuttal. Nunes also goes on to warn the State Dept. that their turn is coming: ‘Slew of Subpoenas’ Coming for State Department Officials, Nunes Warns


High-ranking State Department executives — those both current and former — will be “hauled into Congress” next week to “answer publicly” questions about the “salacious and unverified” anti-Trump Steele dossier, according to Rep. Devin Nunes (R-Calif.) in an appearance on “The Laura Ingraham Show.”

Mighty white of him to warn them so they can start destroying hard drives ahead of time. 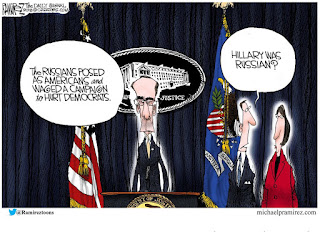 
The chairman of the Senate Judiciary Committee is requesting an interview with a Washington-based lobbyist who served as an intermediary between a Democratic senator and two key figures in the Russia investigation, dossier author Christopher Steele and Russian oligarch Oleg Deripaska.

“The nature and extent of the relationship between Mr. Steele, Mr. Deripaska, and you are of potential relevance to the Committee’s work,” Iowa Sen. Chuck Grassley, a Republican, wrote Monday to the lobbyist, Adam Waldman. Waldman emerged earlier this month as a figure in the Russia investigation after it was revealed that he exchanged text messages last year with Virginia Sen. Mark Warner regarding Steele and Deripaska.


First, while the Democrats justify omitting information federal intelligence agencies presented to the FISA court to obtain surveillance powers on a U.S. citizen, it is an abuse of this secret-court system to withhold details that could bear on the court’s decision. That is true regardless of whether the information withheld reaches the legal threshold of materiality, a question that concerns the admissibility of evidence in a subsequent trial, not the propriety of prosecutorial conduct.

I remain convinced that the information withheld was material. But even if the omissions were immaterial, Americans of all stripes should be concerned that prosecutors hold the power to unilaterally decide whether to share potentially exculpatory or impeachment evidence with a secret court when that evidence, under normal circumstances, will never come to light should the target later be charged criminally.

Second, the Democrat response counters claims of misconduct by stressing that the FISA application “made only narrow use of information from [Christopher] Steele’s sources about [Carter] Page’s specific activities in 2016, chiefly his suspected July 2016 meetings in Moscow with Russian officials.” But that information provided the lynchpin for claims that Page engaged in criminal conduct—something necessary under FISA to obtain a warrant against a U.S. citizen. Significantly, that information also came from unnamed Russian sources and was not corroborated. As I explained at length before, a court cannot find probable cause based on such uncorroborated hearsay.

Third, Schiff’s rebuttal highlights investigators’ interest in Page prior to receiving the Steele dossier funded by Hillary Clinton’s campaign and the Democratic National Committee, as well as evidence indicating Page served as a foreign agent. But none of that evidence indicates Page had committed a federal crime. Only the hearsay from the Steele dossier did that and, as just noted, that is not enough.

It would be amusing if Trump were to announce that FISA warrants had been obtained on a slew of prominent Democrats based on flimsy reporting from the internet (aka "fake news"), even or especially if it weren't true.
Posted by Fritz at 8:58 AM