Chicagoans to Obama Library: Not in My Backyard


As more information is being revealed about how badly Obama behaved in office (e.g., allowing Iran to obtain an American drone), more and more Americans are overcoming their reticence at criticizing the first black President. I believe that the mocking of the official portraits is merely the beginning of the end of the grand legacy that was planned.
Now, a group of Chicago community activists have filed a lawsuit demanding answers about the Barack Obama Presidential Center’s “impact on the environment” of the historic Jackson Park area.


“Like the public generally, we find the Obama Foundation and City of Chicago not forthcoming,” Gabriel Piemonte and Janet Geovanis, two members of the Coalition to Save Jackson Park, wrote Wednesday in a Hyde Park Herald letter to the editor. “This is a massive development involving public land, and we have been kept in the dark about too many details.”
The coalition, which filed the Freedom of Information Act complaint on Jan. 16, accused the “wealthy Obama Foundation and the city officials it works with” of refusing “to engage with citizens whose housing, schools, and parks will be forever altered” by the library’s construction.
The group’s FOIA request, filed Nov. 3, sought information on a host of environmental impact issues, including “potential flooding and run-off,” “avian-migration and nesting issues,” and “impact on local microclimate and temperatures in Jackson Park.” 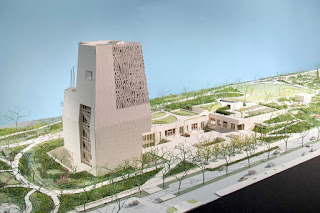 Like so much of the history of the Obamas, the residents fear what was promised will not be the actual reality.


“My client is concerned about deals cut in secret and what those were,” said Daniel Massoglia, the attorney who filed the suit on behalf of the coalition. “The concern is that private interests are co-opting public land to build what is no longer accurately called a presidential library with very little community involvement.”
…Despite the Obama Foundation’s insistence that the center will have the same feel as any other presidential library, just not be operated by the National Archives and Records Administration, “it has changed and that does matter,” said Gabriel Piemonte, a Jackson Park resident and member of the coalition. “I feel that this isn’t what we talked about,” Piemonte said. “We talked about a more seriously purposed facility.” Piemonte will be content when “the community is a part of the decision-making process about the center,” he said. “The city is not sharing with us.”

I project there will be many more complaints and lawsuits unless the plans for the library begin to reflect the true nature and extent of Obama’s national legacy.

Contrary to the author at Legal Insurrection, I strongly doubt that the opposition has much, if anything, to do with disappointment in Obama's policies. I suspect it is more likely to reflect the almost reflexive opposition of some factions of liberal communities to anything resembling development. Liberal believe, despite all the best available evidence, that liberal policies are good for urban communities. Still, it's kind of amusing to see some blue on blue action. They need to add more windmills and solar power to the plant.

It's surprising to me that right wingers have not adopted the liberal strategy of environmental lawfare to stop or at least mitigate, liberal plans. It's an obnoxious tactic, but I don't think that we should unilaterally disarm.