In Part 4, I showed how one gets a rise out of nothing, a neat trick performed by Nerem et al. That’s R. Steven Nerem, of the CU Sea Level Research Group. The blinking image is the summary of that essay.

Doubling down on that neat bit of work, Nerem et al. have a new paper out that magically (literally) manages to find an acceleration in Global Mean Sea Level Rise that will produce 65 cm ± 12 cm of sea level rise by the year 2100. In inches, that’s 25.6 inches ± about 5 inches.

It is important to note that this new-found acceleration is not based on any change in the sea surface height of Planet Earth. Others will be writing and posting on the new CU study, I’m sure.

I will respond to it with a simple LINK to my early post, SEA LEVEL: Rise and Fall – Part 4 – Getting a Rise Out of Nothing, and these two annotated graphs from the CU study: 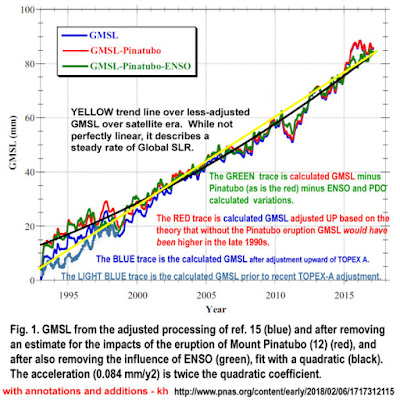 I am sorry to have to inform you, though,  that it is STILL worse than we thought. You see, the data used in determining satellite-based SLR in the above data and graphs, is not really a rise in the sea surface HEIGHT.  That is, it does not represent (and never has) an actual increase in the level of the sea surface above the geoid (or, easier to imagine, increasing distance from the center of the Earth). Real sea level rise is reflected in a rise in Global Mean Sea Surface Height.  But Global Mean SLR, as calculated by Colorado’s Sea Level Group,  NOAA, and other SLR groups is a concept — not a measurement.  I once used the phrase “imaginary number”  to describe this type of non-physical metric — a number said to represent something in the real world, but in actuality, being something different altogether.  I discuss in general how this comes about in an essay “What Are They Really Counting”. SLR satellite data includes things such as the “GIA Adjustment” — which is the amount of SLR that there would have been if the ocean basin hadn’t increased in volume  and in the case of this new study, how much higher the sea surface would have been if it had not been suppressed by the Mount Pinatubo volcanic eruption,  another correction for ENSO/PDO “computed via a joint cyclostationary empirical orthogonal function (CSEOF) analysis of altimeter GMSL, GRACE land water storage, and Argo-based thermosteric sea level from 2005 to present”, as well as other additions and adjustments  — NONE OF WHICH can actually be found manifested in any change to the physical Sea Surface Height.  But that’s a torrid tale for another time.

So, in effect, they've altered the data from the past to make the imaginary concept of Global Sea Level Rise appear to accelerate. There is as of yet, still no evidence of actual acceleration of sea level rise in real sea level data sets, e.g.:

This is not to say their adjustments may not have valid reasons, but I suspect that confirmation bias is going on. Adjustments that will produce apparent acceleration are accepted with minimal scrutiny, while adjustments that would mitigate it are heavily scrutinized, and not readily accepted.