It's the weekend, so new news is scarce, but opinion flows like water: Michael Goodwin: Russian indictments prove Trump won fair and square

The indictments obtained by special counsel Robert Mueller on Vladimir Putin’s attempts to create discord in the 2016 election and eventually support Donald Trump are important both for what they say and what they don’t say.

They offer huge victories for Trump — and thus more defeats for Hillary Clinton — but they don’t close the books on everything about 2016.

The very good news for the president is that the indictments are firm in saying that any Americans contacted by the 13 charged Russians, including Trump campaign associates, did not know they were dealing with Russians.

The indictments also state forcefully that despite their social media efforts, which ranged from creative to clumsy, the Russians had no impact on the election results.

McMaster On Yesterday’s Indictments: It’s Now “Incontrovertible” That Russia Interfered In The 2016 Campaign


Trump was reportedly ecstatic that the indictments noted that his associates were “unwitting” in their contacts with Russians. I understand that reaction, but he’s being outmaneuvered here and I’m not sure he realizes it yet.


By laying out a meticulous case for how Russia tried to tip the electoral scales toward Mr. Trump in 2016, Mr. Mueller has made it much harder for the president to dismiss the investigation as mere politics. He may also have made it harder for Mr. Trump to fire Mr. Mueller himself, since, as some Democratic lawmakers argued, that would look like an attempt to help Russia further undermine American democracy…
Far from being rattled, Mr. Trump was elated, according to his advisers, because he viewed it as evidence that Mr. Mueller now knows who the malefactors are — and they do not include him or members of his team. (The indictment refers to campaign officials who met or communicated with Russians, but says they were “unwitting.”)

POTUS has spent the last 16 months questioning Russia’s involvement in the campaign despite the fact that ev-uh-ree-one in his intel bureaucracy insists they’re guilty. It was only a few days ago that CNN reported that he still doubts Russian interference even now. The theory for his skepticism is that he’s succumbed to motivated reasoning: If Russia meddled, he may be thinking, then my great victory wasn’t truly earned. That’s not necessarily true — Russia’s impact on influencing how Americans voted was probably marginal, almost certainly less significant than the eleventh-hour Comey letter about reopening Emailgate. (Russian propaganda on Trump’s behalf also surely mattered much less than the endless tons of free media his campaign received during the primaries from cable news.) But you can understand his sensitivity about the subject. Plenty of Democrats have convinced themselves, however foolishly, that Hillary would have won if not for the sinister schemes of Vladimir Putin.

We Know Nothing; Mueller Knows All


It will now be even harder for Trump to fire Mueller. Capitol Hill already would have gone crazy if Trump tried that. But after Mueller has done such substantive work — even earning the lavish praise of Trump lawyer John Dowd — it’s impossible to imagine Trump getting away with firing him.

The fact that Deputy Attorney General Rod Rosenstein gave a press conference is significant. It was a major vote of confidence in the Mueller probe: This is Rosenstein saying he’s proud of this work, and fully supports it.

"For the past year, Donald Trump has repeatedly denied the existence of a profound national security threat..."


... write the editors of the NYT in "Stop Letting the Russians Get Away With It, Mr. Trump." They're pointing at the new indictment as if it makes it obvious that the Russians already did something that amounts to a profound national security threat. But it's far from obvious. In fact, I can't see it at all.


On Friday, Robert Mueller, the special counsel investigating Russia’s role in the 2016 election, filed criminal charges of fraud and identity theft against 13 Russian citizens and three Russian organizations, all alleged to have operated a sophisticated influence campaign intended to “sow discord in the U.S. political system.”

So... they engaged in speech and they meant to "sow discord." I can't see that as a profound national security threat. If we were to adopt that view and act upon it, there would be a profound threat to freedom of speech.


["Specialists" at the Internet Research Agency] posed as Americans and created false identities to set up social media pages and groups aimed at attracting American audiences.

Another day on the internet — people pretended to be what they are not. If you're going to assume that readers of the internet are so naive as to take the crap that pops up on line at face value, you're making the argument that we can't even have a democracy at all. People are too stupid to vote. But we're on the alert — even when we read the New York Times — that somebody's always trying to con us

Shep Smith: Yesterday’s Indictments Prove Russiagate Is The Opposite Of A Hoax. I don't think Trump ever said Russians didn't meddle; he did however insist that it didn't effect the results

The Russians Are Coming And Red Flag Waving


OK, Mueller validates his consumption of oxygen by backing our intelligence agencies and the conventional wisdom that yes, Russians tried to disrupt our political process. "Hey, dude, where's my collusion?" remains a Frequently Unanswered Question, but any day now. The Resistance is Keeping Hope Alive!


The Russian effort to meddle in the 2016 presidential election spanned at least two countries and multiple states, and included fake rallies, false identities and divisive slogans intended to magnify Trump’s message and undermine Clinton’s candidacy, according to a 37-page indictment of a notorious Russian troll farm announced by the Justice Department’s special counsel.

“I’m amazed — and I suppose I shouldn’t be — what a widespread campaign it was,” said Republican consultant Doug Heye. “It looks like the size of this was probably bigger than Jeb Bush’s primary campaign.”…


"In or around June and July 2016, Defendants and their co-conspirators used the Facebook group 'Being Patriotic,' the Twitter account @March_for_Trump, and other organization accounts to organize two political rallies in New York," the indictment alleges. "The first rally was called 'March for Trump' and held on June 25, 2016. The second rally was called 'Down with Hillary' and held on July 23, 2016." They also conspired to plan rallies to support Hillary Clinton, including one in July 2016 called “Support Hillary. Save American Muslims.” The majority of the rallies were in support of Trump, though several of them favored Clinton or "The Resistance."

From "Does Mueller Indictment Mean Clinton Campaign Can Be Indicted for Chris Steele?" by Robert Barnes, who observes that Mueller chose targets who will never be brought to trial and therefore knew he was using a legal theory that would not be tested in court. 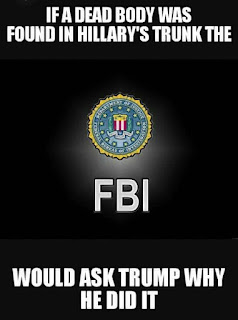 Apparently, meddling in foreign elections is OK if your name is Clinton. In unearthed 2006 audio, Clinton appears to suggest rigging the Palestine election.

Ann Althouse approves of Andy McCarthy: "Is There an Obstruction Case against President Trump?"

If anyone can analyze the hell out of that question, it's Andrew McCarthy. Let me express my awe and thanks.

And let me point also to this column of his from a couple days ago, "What Did Comey Tell President Trump about the Steele Dossier?," which he links to in the new column with this mind-bending summary:


In a column on Thursday, I argued that the Obama administration saw the Russia probe as an opportunity to paralyze President Trump. As I noted in the column, the motivation for this could have been sinister or public-spirited — how you see it probably depends on what you think of Obama and Trump. President Trump’s political opponents would have seen the Russia probe as a chance to strangle his capacity to govern and pursue his agenda; some investigators who suspected that the disturbing allegations in the Steele dossier were true, even if they had not and probably could not be proved, may have harbored good-faith concern that Trump could be blackmailed by Russia. Lying to Investigators Shouldn't Be a Crime - Everyone from President Trump to a petty thief is at the same disadvantage when talking to prosecutors.

Part of the reason for my position involves symmetry. As long as government investigators are allowed to deceive you, you should be allowed to deceive government investigators. And deceive you they may -- rather willy-nilly. If a suspect confesses after police falsely tell him that his fingerprints were found at the crime scene, fine. If a suspect confesses after police falsely tell him that they have satellite images and DNA evidence linking him to the crime, fine. My view is that suspects should have the same freedom. If you can throw the police off the scent by telling them you weren’t there ... fine.
. . .
One might object that all of this would make the prosecutor’s job more difficult. But prosecution should be difficult, and should generally be aimed at discovering an actual crime. If, on the other hand, we aren’t going to grant suspects the right to lie to investigators, we should at least take away from investigators the right to lie to suspects.

What Do We Do about the Biased and Incompetent FBI? There isn't a governmental agency out there that wouldn't benefit from a 20% staff cut. Starting at the top.
Posted by Fritz at 10:20 AM