Well, maybe "create" isn't quite the word we're looking for, but then neither is "discovered." The shark was already known to science, but two species were being considered as one. New DNA technology showed that the sharks, apparently identical in real life, had very different genetics. We call that cryptic speciation, and it's not all that uncommon with small critters.


Toby Daly-Engel, a shark biologist at the Florida Institute of Technology, has helped solve a taxonomic puzzle and spearhead the discovery of a new deepwater species: the Atlantic sixgill shark.

How so? Daly-Engel and a team of researchers determined that bigeye sixgill sharks in the Atlantic Ocean — specifically Belize, the northern Gulf of Mexico and The Bahamas — differ genetically from their counterparts in the Pacific and Indian oceans.

"This is like discovering a brand new living fossil," Daly-Engel said during an interview in her office at Florida Tech's Shark Conservation Laboratory.

"What's exciting about this is that we're still discovering cryptic species of shark. And not just little sharks. And there are lots of little sharks out there. But big sharks — sharks that are 5, 6 even 7 feet long — that have been around for hundreds of millions of years, since before the dinosaurs, and yet have not been identified by science," she said.

Daly-Engel headed a group of shark scientists from the Florida State University Coastal and Marine Laboratory, NOAA's Southeast Fisheries Science Center in Panama City, and MarAlliance in Belize. Their findings were published Feb. 13 in the online edition of Marine Biodiversity, a peer-reviewed international journal.
. . .
The Atlantic sixgill (Hexanchus vitulus) is a newly discovered variety of the bigeye sixgill (Hexanchus nakamurai).

The bigeye sixgill shark evaded discovery until 1962 near Taiwan. In the Atlantic, the species was first recorded in 1969 in The Bahamas, Daly-Engel said. 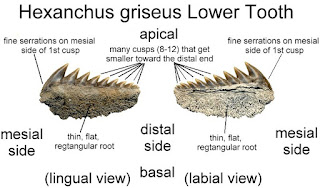 Six Gilled Shark (We call them Cow Sharks) teeth are among the fossils we collect at the beach, and good ones are highly prized as being fairly rare. These date from the Miocene era, approximately 5-23 million years ago. I wonder if this finding will affect their nomenclature?
Posted by Fritz at 9:12 AM