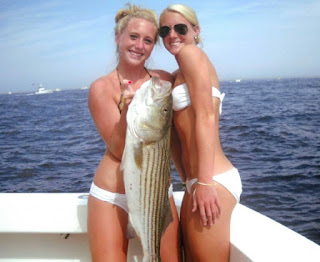 
As proposed this go-around, “Maryland anglers, particularly the charter boat sector, have expressed concerns regarding the high ratio of released fish since the size limit in the Chesapeake Bay was increased to 20 inches, which has made it difficult to attract customers.” 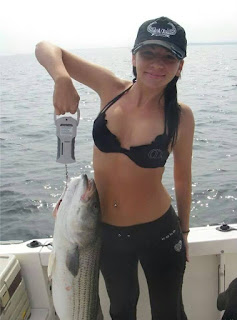 I really don't see any indication that charter anglers are seriously hurting for customers, who would rather take home two 20 inch fish than two 19 inch fish. Certainly the good ones don't have much trouble catching their boat limits most days.


The major issue at hand lies in the high level of release mortality associated with this fishery as cited at the Atlantic Striped Bass Management Board meeting in October, 2017. As noted by Mike Luisi, MD, proxy for D. Blazer (administrator appointee) at that meeting, the dead discards, “…has to do with water temperature. It has to do with hook location and other elements that go into everyday fishing activities. I don’t want the Board to think that this 9 percent is something that is across the board. It changes in different parts of the coast. It has a lot to do with the hooks that are used and the baits that are used. Artificial lures certainly don’t have the same mortality that live lining and chumming have.” 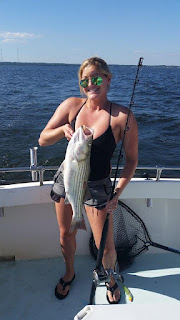 Striper mortality after return to the water is very temperature dependent. Below about 60 F, they survive catch and release extremely well, provided the gills are not torn. Above 60 mortality increases until when the air and water temperatures are above 80 (a good portion of our summers) mortality can be very high. As noted, the gear matters too, with trolling, chumming and live lining with J-hooks causing much higher mortality than lures which normally stick in the mouth rather than throat or stomach.


While the ASMFC accepts a 9% release mortality in its stock assessment, Maryland noted in its proposal that, “Reports from charter boat captains [in the Chesapeake Bay] estimate that approximately 30% of the fish they throw back will not survive. Strong perception of a significant increase in the number of dead discards as a result of management actions has also lead to criticism of management agencies by recreational anglers. The intent of this proposal is to reduce waste without increasing total removals by shifting fish from the dead discard to harvest category.” 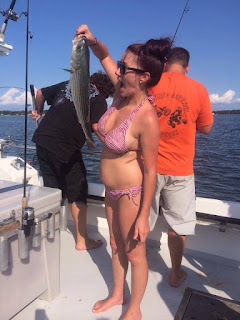 The mortality estimates are gross averages over many different conditions and gear types, and are, at best, (SWAG) a scientific wild ass guess. Remember that if you ever peruse a stock assessment report which reports commercial and recreation discard mortality to the last fish or lb. In reality, we're lucky if they're in the right ballpark.


While several proposals were submitted, ultimately Maryland only sought approval for a single option: a 19-inch minimum size limit (a decrease of 1 inch from 2017 regulations) from May 16 – December 15 with a 2-fish bag limit (with only one fish greater than 28 inches), and all anglers fishing with non-artificial bait or lures being required to use circle hooks. The idea here is that while direct harvest would increase due to the decreased minimum size limit, the number of discarded fish would decrease. Couple this in with the requirement to use circle hooks, and, as proposed, it would result in subsequently fewer total fish which eventually perish due to release mortality caused by the use of treble hooks and bait by the charter boat fleet.

So, we can keep two 19 inch fish per angler in the regular (not trophy) season this year, and are required to use circle hooks when bait fishing. That's not a big change.

Of more concern to me, Walleye Pete told me yesterday he's probably selling his commercial quota to a person who offered him several times what he could expect to earn annually from it. Good news for Pete, but bad news for me, as it means he won't need any assistance in commercial fishing.