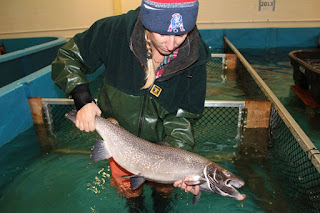 Documents filed with state regulators show that a fish farm that broke apart Aug. 19 in the San Juan Islands released more than 160,000 farm-raised Atlantic salmon into Washington state waters — far more than the original estimate — and that the holding pen for the fish was “due for complete replacement.”

The Canadian company that operates the farm originally claimed that “several thousand” non-native Atlantics escaped into the Salish Sea, the ecosystem that runs from the Strait of Georgia in British Columbia to the southernmost waters of Puget Sound in Washington state, home of the wild Pacific salmon.

The company also initially said that unusually strong currents, triggered by the moon during the solar eclipse, had caused the pen to break open. 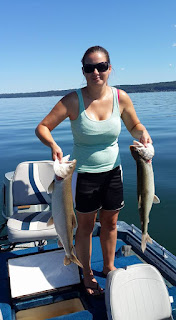 That sounds fishy to me. If it was adequately built to stand normal spring tide currents, the added tide from the eclipse alignment shouldn't be a factor.


The company, Cooke Aquaculture Pacific, later backed off the linking of the failure to the eclipse. But records filed by the company with the state Department of Natural Resources and the U.S. Army Corps of Engineers indicate that the 30-year-old floating farm’s failure was probably the combination of a strong underwater current winning out over a weakened anchoring system that kept the pen in place.
. . .
The accident prompted state and Native tribal officials to declare a fish emergency. They fear the commercially bred, non-native salmon will spread disease and weaken Pacific stocks through crossbreeding.

While something like that is possible, my guess is that they're hoping for some "ecological blackmail" payout.


The state has invited anglers and netters to catch as many Atlantics as they choose, while tribal fishers have been flooding the zone in hopes of lessening the threat of an invasive species in hallowed Pacific salmon feeding grounds.

“Tribal, commercial and recreational fishers continue to recapture fish that escaped the enclosure and Washington’s Department of Fish and Wildlife is collecting data on those catches,” Cooke said in an update Friday.

I've never understood why they use Atlantic Salmon in West Coast fish farming operations, when they have perfectly good local species which could be used.

Wombat-socho has "Late Night With Rule 5 Monday: Kate Upton Goes To Houston" ready for your viewing pleasure. Linked by Evi L. BloggerLady in "Kate Mara in Chappaquiddick, The Movie".
Posted by Fritz at 7:02 PM