Some Good News from Florida

The general consensus seems to be that, despite all the damage, Florida fared better than expected in Hurricane Irma. Althouse leads with "Why Hurricane Irma wasn’t far worse, and how close it came to catastrophe."

The only mention of climate change in the article is in the blurb about the author: "Jason [Samenow] is the Washington Post’s weather editor and Capital Weather Gang's chief meteorologist. He earned a master's degree in atmospheric science, and spent 10 years as a climate change science analyst for the U.S. government."

The article is about luck and happenstance — "shifts and wobbles." And I can't help feeling suspicious that if the hurricane had bounced into more damaging locations, it would be framed in terms of climate change.

Why yes, in the media, bad weather news is portrayed as proof of global warming climate change hotcoldwetdry, and good weather news as undeserved good fortune, even though august authorities such as NOAA, NAS and the IPCC have been unable (despite dogged effort) to blame climate change for increased number or intensity of tropical systems. Perhaps the fact that  tropical systems have shown no trend toward increasing number or intensity makes it difficult.

I think that Hurricanes Andrew and Katrina were a wake up call to the inhabitants of Florida, and they were better prepared.

And on a personal note, good news from Capt. (and author) Ed Robinson, whose blog is linked in the right hand column. Capt. Ed left the working life a few years ago to become itinerant "trawler trash" living on a boat, the "Leap of Faith", and travelling from port to port in Florida with his lovely Ms. Kim. Capt. Ed is the author of the "Breeze" series of books about someone who leaves the working life to, well, you know the rest.

Anyway, Hurricane Irma came up too suddenly for them to evacuate their boat, and they were forced to secure it as well as possible (with heavy anchors), abandon it, and evacuate to South Carolina (where they faced Irma induced flooding). However, word, and pictorial evidence  has come to them that "Leap of Faith" survived the storm, and was seen floating at anchor: 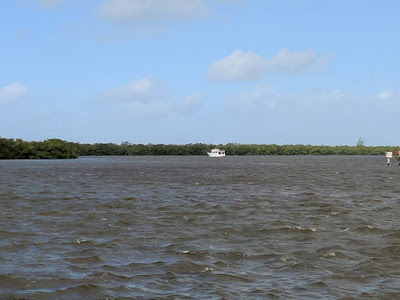