Except for one: Former Army Ranger Is Only Steelers Player To Stand For National Anthem

The entire Pittsburgh Steelers team remained in the locker room during the national anthem, with the exception of one player: Army veteran Alejandro Villanueva, who plays offensive tackle for the Steelers.

While the rest of his teammates remained in the locker room, Villanueva stood in the tunnel holding his helmet in his left hand and holding his right hand over his heart as the anthem played.

Alejandro Villanueva was the only Steeler to come out for the National Anthem, standing in the tunnel. pic.twitter.com/L4EtxRQSvA
— CBS Sports (@CBSSports) September 24, 2017


Villaneuva played in college at West Point Military Academy before going on to become an Army Ranger. He served three tours in Afghanistan and was awarded the Bronze Star Medal for Valor. He was signed by the Philadelphia Eagles in 2014 before eventually joining the Steelers.

FWIW, Villanueva is a friend and client of Walleye Pete's and fishes with him frequently. Here's a picture from a couple of years age showing Alejandro with a pretty big fish from the CCNPP rips in winter. Note the familiar Power Poles. 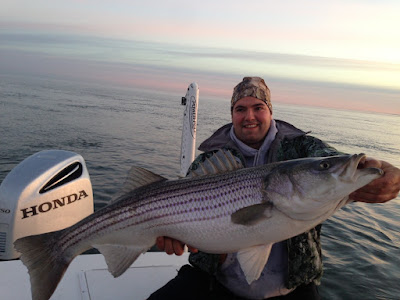 Yes, he's cheating like mad to make that fish look that big, but it takes a strong guy to hold that fish out that far.

But as far as the Steelers "protest"? This is how you kill your sport, and get more Trump.
Posted by Fritz at 5:26 PM