How to Lose Your Job in 140 Characters or Less 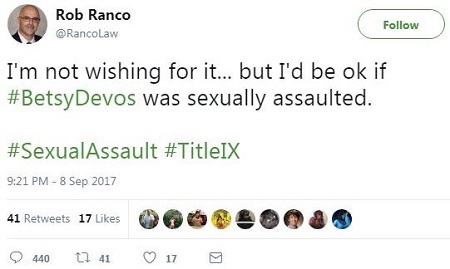 The Eternal Genius of the Liberal Mind:


A Round Rock attorney resigned after posting a controversial tweet Friday that caused a firestorm on Twitter.
The tweet, which was posted by Robert Ranco, a partner with the Carlson Law Firm, read, “I’m not wishing for it…but I’d be ok if #BetsyDevos was sexually assaulted. #SexualAssault #TitleIX.”
The tweet caught the eyes of national news outlets like the Washington Times and Breitbart, as well as Twitter users who snapped screenshots before the account was locked and then deleted.
Law firm managing partner Craig Carlson announced in a statement Monday that Ranco resigned.
“I considered the health of everyone in our organization, promised my partners and my employees that we would act according to the values of our firm, and sat down to speak with Mr. Ranco,” Carlson said.
Carlson stated that with over 75 percent of employees of whom are women, anyone in the company “advocating or even expressing apathy towards sexual assault” would not be accepted. Carlson said Ranco took full responsibility of the tweet.
“As a man of faith, believer in forgiveness, and longtime friend, it is my sincere hope that Rob with learn from this experience and go on to have a very successful career,” Carlson ends the statement.

What would inspire Ranco to post such a disgusting thing? It’s the echo-chamber effect produced by liberal media. If all you knew about politics is what you absorbed through CNN, MSNBC, Huffington Post, the New York Times and other left-wing sources, you would hate DeVos, too. The way such sources presented DeVos’s proposal to roll back the Obama-era Title IX policy, it would be easy for someone inside the liberal echo chamber to believe that DeVos is a bad person promoting bad policies that will expose college students to a greater danger of sexual assault.

On the other hand, there's something about Twitter that seems to reduce the intelligence and inhibitions of some people using it. Maybe there should be a Twitter safety training class required for users.
Posted by Fritz at 4:30 PM