Before I get into it, just a reminder, Obamacare is failing, badly: Health Insurers in New Mexico To Implement Record-High Premium Increases

Insurers will increase premiums next year from a range of 36 to 41 percent for midlevel insurance plans. For all plans, premiums are expected to rise a range of 17 to 49 percent.

My sympathies are somewhat lessened upon recalling that New Mexico voted solidly for Hillary.

If You Want Medicare For All, Get Used To Eating Rabbit Now


Venezuelans still have access to free health care—except they don’t receive much care. The country suffers an 85 percent shortage of medicine and a 90 percent deficit of medical supplies. Fewer doctors are available to provide care, too. By 2015, at least 15,000 doctors had left the public health care system because of shortages of drugs and equipment and poor pay.

The Alaska Purchase: Graham, Cassidy Try To Buy Murkowski’s Health-Care Vote With Extra Goodies. I'm trying to work up some outrage, but then I remember the Corn Husker Kickback. Politics ain't beanbag. With Timing Tight for GOP’s Health-Law Repeal Effort, Opponents Rush to Mobilize. Jimmy Kimmel Got a Hand From Chuck Schumer in His Fight Against Obamacare Repeal. How Obama is funding the anti-Trump resistance. Big hint, you're the one paying.

And of course, the big news: From the NYT: McCain Announces Opposition to Republican Health Bill, Likely Dooming It. Yahoo: GOP's 'Obamacare' repeal all but dead; McCain deals the blow. Althouse: "Senator John McCain of Arizona announced on Friday that he would oppose the latest proposal to repeal the Affordable Care Act..."


"... leaving Republican leaders with little hope of succeeding in their last-ditch attempt to dismantle the health law" (NYT).

So Lindsey Graham’s being his best friend was not enough. 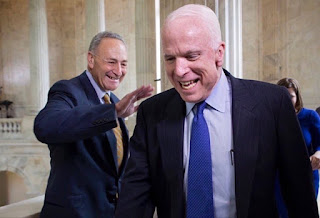 Ace: Shocker: Maine Socialist Susan Collins "Leaning Against" Obamacare Repeal
Another Shock: JOHN McCAIN, HERO OF CONSERVATISM, WILL VOTE TO SAVE OBAMACARE and John "Build the Dang Fence" McCain Liesplains His Obamacare Reform No-Vote: I Won't Support Any Law That Democrats Don't Support Too, thus guaranteeing he will not vote to alter Obamacare.

It's not that he loves Obamacare, it's that he hates Trump so much he'll do anything to spite him. And he loves being praised by the press and Democrats.

Remember, Congratulations, Democrats. Obamacare Is Here To Stay And You Own It, Well, them, John McCain, Susan Collins, and Rand Paul. Can Megan inherit?
Posted by Fritz at 6:54 PM